LA's Climbing, Dancing, Rapping, Vaping, Backflipping Man Who Made The 110 Freeway His Stage 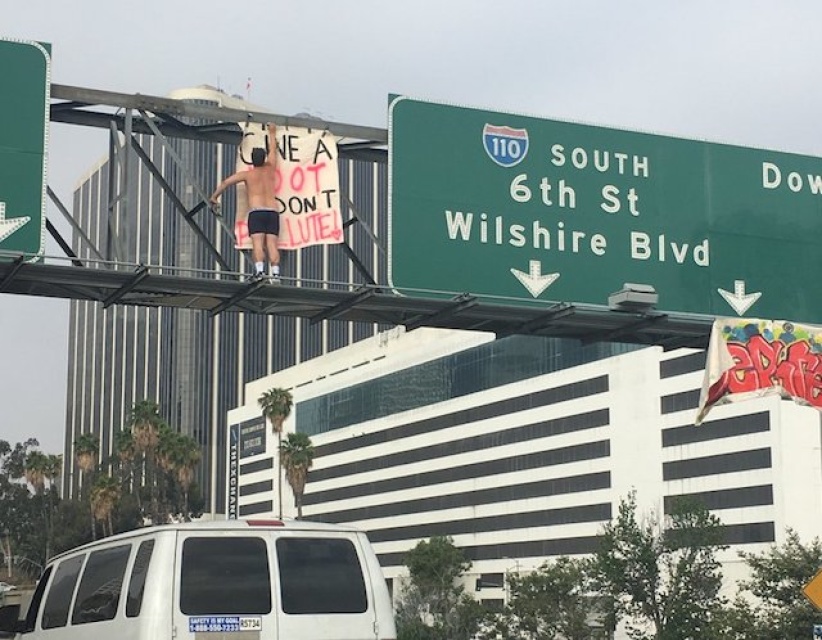 A man climbed a sign above the 110 Freeway and hung anti-pollution banners. (Photo by @GGarciaRoberts via Twitter)
All the world is a stage, but one man needed only a Los Angeles freeway sign to put on his thrilling show.
During the Wednesday morning rush, he climbed a sign above the 110 Freeway in downtown Los Angeles, leading to a partial shutdown of the major city artery and ruining the commute of hundreds, if not thousands, of Angelenos.
The man, shirtless and wearing boxer shorts, socks and high-tops, used a bullhorn to announce his name was "Dephree." He also hung a sign with the name.
He decorated the freeway sign with other banners as well, including one that read "Give a hoot don't pollute!"
Responding Los Angeles city firefighters and California Highway Patrol officers deployed ladders in an attempt to get him down, but "Dephree" was far from done.
What followed was about two hours of high-stakes thrills, where the man danced, vaped, rapped, evaded capture and eventually backflipped into custody.
Here's how the thrilling saga played out on Twitter, thanks to live-tweeting from L.A. Times reporter Benjamin Oreskes.

So this is happening right now. He's talking about pollution i think. pic.twitter.com/Quhn2fV4aj

He just said: "My name is Dephree and I love God." pic.twitter.com/UXnMLjRkNE

A crowd of onlookers formed and people seemed to be enjoying the show. Someone yelled at the man to take his shorts off.

"Dephree" was also using a bullhorn to rap. When he wasn't rapping or dancing, he was doing a little vaping. Authorities set up some inflatable pads under the sign just in case he fell.

Only one lane of the 110S is open right now and the LAFD has brought a ladder closer and a pad for Dephree to land on if he falls. Also Dephree LOVES to vape. pic.twitter.com/BrfqU8Dfkc

Responding Los Angeles city firefighters and California Highway Patrol officers deployed ladders and attempted to get him down, but "Dephree" was not willing to go quietly.

A CHP officer just threw Dephree'a bag off the sign, and he'a not happy. pic.twitter.com/euqCvI4Eci

Dephree has been up there about a hour now. The 110S is completely closed, and our boi has taken up a new position. pic.twitter.com/nqFEqlWgrN

Despite multiple officers and firefighters on ladders, the man continued to evade capture. Obviously first responders were playing it safe and did not want to risk anyone falling.

Dephree is in a bit of a sticky situation. He has been pinned in a corner by several ladders. So if he tries to come back across the exit sign he'll be nabbed by CHP or LAFD pic.twitter.com/w4NWQS7udN

Dephree sprung himself! LAFD ladders have slowly been closing in on him but he wont give in. pic.twitter.com/rh1Xtp3WYj

After spending roughly two hours up on the sign, "Dephree" finally surrendered — and he went out in his signature style. As CHP officers closed in, he did a backflip off the sign and onto the pad on the freeway below, where he was taken into custody.

Dephree has just done a backflip of the sign. pic.twitter.com/d5qh6qybQ6

The Los Angeles Fire Department said the man was safely taken into custody.

The southbound 110 was reopened after most of the right lanes were closed due to the man's antics.

Too bad for the commuters stuck in traffic, but at least nobody got hurt. And local TV news will have stellar footage to run all day.


News happens every day. Here at LAist, our goal is to cover the stories that matter to you and the community you live in. Now that we're part of KPCC, those stories (including this one you're on right now!) are made possible by generous people like you. Independent, local journalism isn't cheap, but with your support we can keep delivering it. Donate now.