I Went To A Secret, Silent 'PLAY' In DTLA And It Was Kind Of Amazing 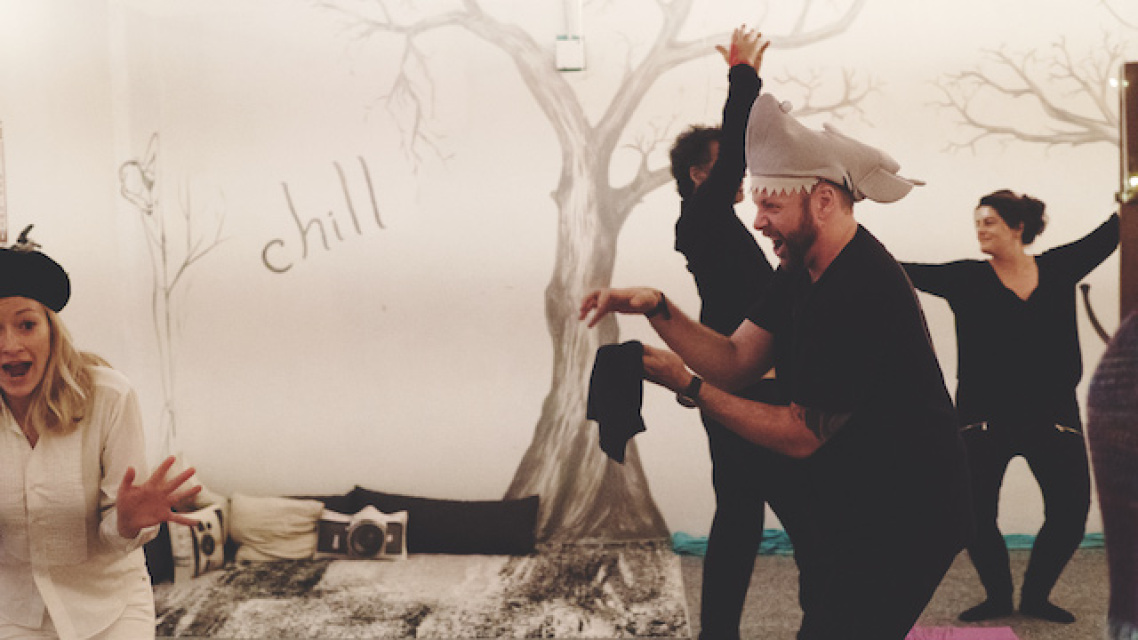 Shark and chill at the Silent PLAY Experiment. (Courtesy PLAY)

On a recent Saturday night, I went to downtown Los Angeles to play. Not to a play, but to "PLAY." I didn't exactly know what I was in for.

I was told to wear black, and leave my cellphone behind. All I had was a street address, and an arrival time.

When I stepped into the little downtown storefront, I was handed an instruction sheet with the most important rule: No talking allowed. Then I was given a small chip of ice. Once it melted, I was invited to crawl through a tunnel, leading me to a series of connected rooms. And for the next 90 minutes or so, I and a couple dozen other hipsters just... played.

You can paint on a wall. You can type out a story on an old typewriter. You can put on makeup, or put it on someone else; throw on a costume and pose for a photo, collapse in a room filled with hundreds of stuffed animals, or challenge some stranger to a game of Twister. Toward the end of the night, everyone gathers for charades — still no talking, so you write your answers on a blackboard — and, if you're in the mood, some dancing. 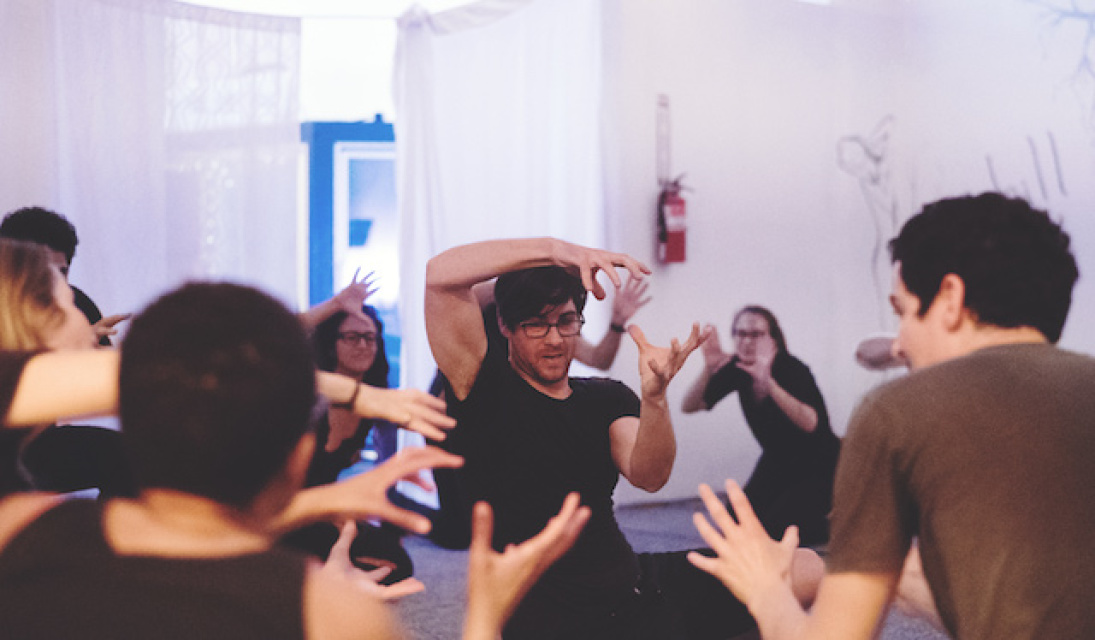 Hands on with the Silent PLAY Experiment. (Courtesy PLAY)

PLAY is the brainchild of Olivia Hamilton, and this version of it happens Saturday nights in downtown Los Angeles. The Silent PLAY Experiment is the latest evolution of several PLAY experiences that have been held so far.

Hamilton is an actress who appeared in La La Land. She first worked in finance and consulting, but didn't find the jobs fulfilling. So she started taking acting classes, and those led to the idea to start PLAY.

"The types of things you do in an acting class are not just exercises for the craft of acting in a scene," Hamilton told KPCC's The Frame. "A lot of it is just opening up your instrument and getting in touch with different parts of your personality. Which, from my experience working at McKinsey and other business jobs, are pretty much suppressed."

Hamilton was working on acting as she lived with her little sister in a studio apartment, when they had an idea: to take non-actors on a similar journey of opening up and getting them in touch with their "creative, playful, childlike self."

So they sent a Paperless Post to eight people who didn't know each other and invited them to their 500-square-foot apartment for an early iteration of what they're still doing, then known as "Experience Thursday."

"We had created the first PLAY program taking exercises from things I was doing in acting class, and also things we did when we were kids together that we loved, like paper bag skits."

The mission: take people without a lot of creativity in their lives and let them be creative people.

"People kind of lit up. People described feeling kind of relaxed, like as if they had a couple of drinks, but they hadn't had any."

The biggest gains people saw: a shift in their own identities.

"I think a lot of people tell themselves 'I'm not creative, I'm not that, I don't dance in public.' And then after a PLAY experience, they're like, wait, I am kind of silly, I can do that, my sense of self is now expanded." 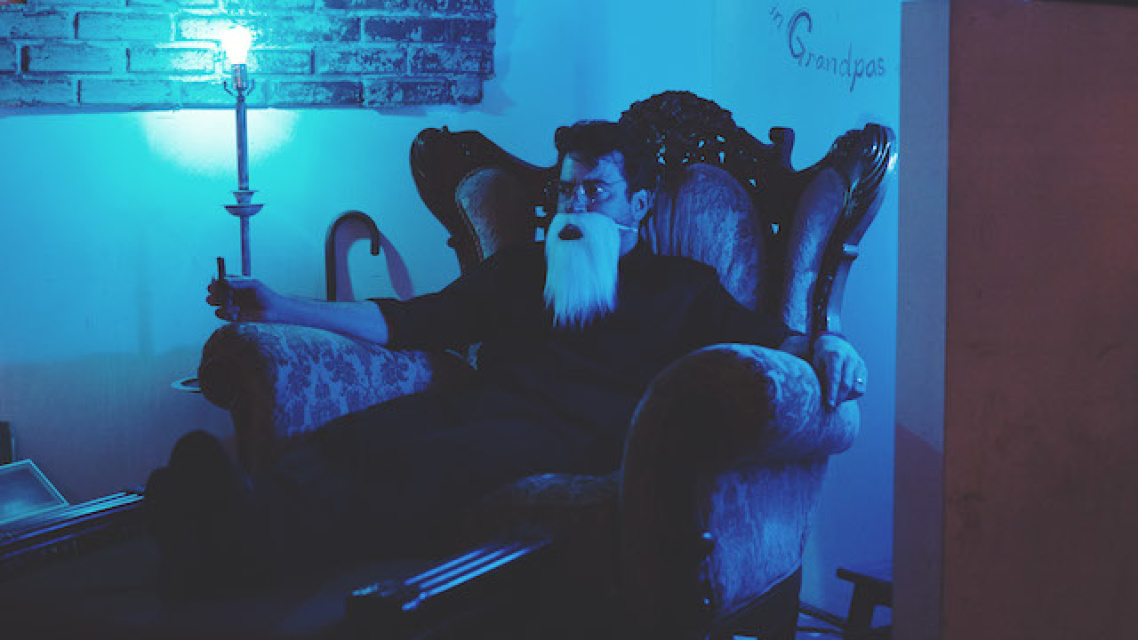 PLAY has something for people of all ages.

People start as individuals or couples, but a group dynamic happens, and everyone becomes an organic body that does things together. Facilitators help that happen by guiding the play.

"For the silent experiment, it does start in that first 45 minutes, because we added some prompts in our language and welcome notes to encourage people to work with people they don't know. But I think it kind of depends on the individual. Some people come in and they're like, 'this is my jam,' and they just go up to random people they don't know and they're interacting with them. It's so comfortable and easy for them. And other people come in and they want to sit in the corner. And maybe that person is grabbed and invited, but it sort of just depends on the type of person you are."

So much of being an actor is about rejection. It's about going in, doing your best. There are thousands of actors that are trying out for a handful of parts any given hour of any given day. But something that's important to Hamilton is that there's no judgment, no evaluation of whether or not you're doing a good job or going to get the callback.

"Often times when I'm acting, I do my best work when I'm not afraid to fail. And I'm not afraid to actually not do it right. That to me is related to this fostering environment where no one can do anything wrong, because then you get the best creative stuff. But the no judgment thing is really just an invitation to everybody to turn off that judgmental part of their brain for themselves and for other people. I think it's sort of essential in creating an environment where people can expand."

One of the most striking parts of the experience — silence — is actually one Hamilton says isn't critical to what's happening.

"This is the first experience that we've done silent after over five years of doing them. And it's actually really challenging, because when we don't do it silently we can give guidance live. Now when you look into someone's eyes, you're like, 'imagine this.' You just have a lot more flexibility in the room to do spontaneous things when it's not silent. But the reason we experimented with it was that our whole goal in creating these experiences was to get people out of their heads. And we [thought], 'What if we don't give anyone the option to even talk at all? Would people be able to get more dropped in?'"

Hamilton says that imaginative play isn't just for hipsters — it's useful for lawyers, doctors, economists, even those working on Wall Street like she used to.

"I think that play is a movement that's going to be like fitness, basically. In 10 years we're going to be talking about working out our play muscles and our creativity muscles. I hope! If I'm successful in spreading the word."

The current version of the PLAY experience is on Saturdays for the rest of the month, and you can count on Hamilton to create another experience soon. Find out details and get your chance to play at Make-Life-Play.com.