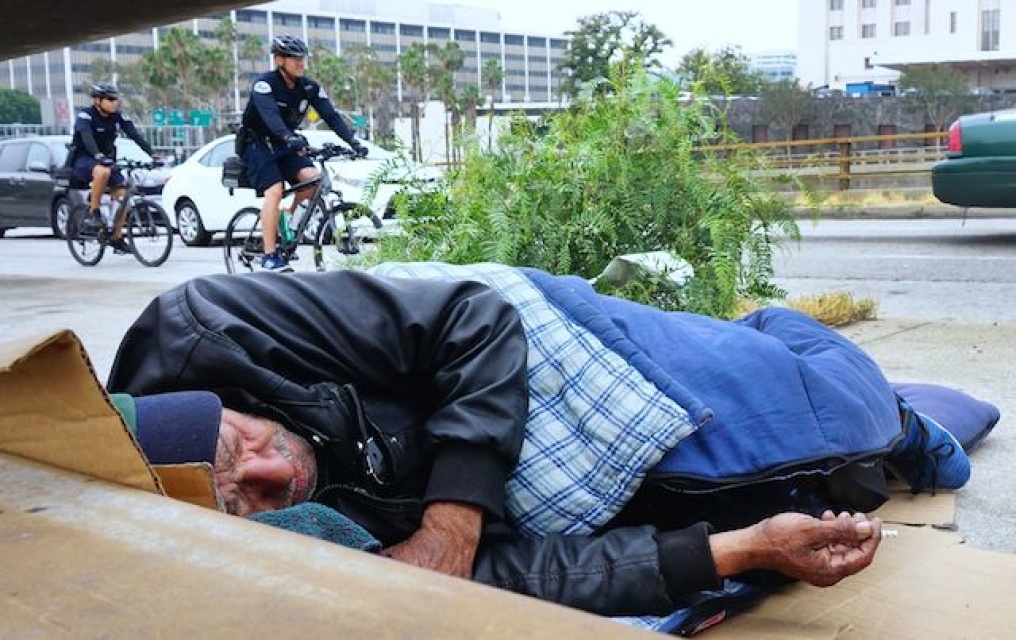 LAPD officers patrol on bicycles past a homeless man napping with cigarette in hand at his encampment on a downtown sidewalk in Los Angeles (Photo by FREDERIC J. BROWN/AFP/Getty Images)

L.A. has a lot of homeless people living on the streets in tents, makeshift structures, vehicles, and even just out in the open. There are more than 23,000 so-called "unsheltered" homeless people in the city.

And, although there are some restrictions, the city more or less allows people to make beds out of public spaces.

Some see this as a general permissiveness toward homelessness, but there's a reasoning behind it — some of it stemming from legal settlements.

There are about 10,200 shelter beds in the city, if you include beds that open up solely during the cold winter months. (As of last count, only 8,400 were occupied, but that's a different story.)

So even if every homeless person agreed to sleep in a shelter, there are only enough beds for less than a third of them.

WHAT IT WOULD COST TO SHELTER EVERY PERSON ON L.A.'S STREETS

$657 million. That's according to a new report from the L.A. Homeless Services Authority. That's the first year. After that, the report found that it would cost the city about $354 million a year to run the shelter system.

That's not a high estimate. New York City, which runs a shelter system for all but a few thousand of its 77,000 homeless people, spends well over $2 billion a year on shelters.

Shelters, ideally, are not just cots opened up for the night in a church cafeteria (though we do have some of those in L.A.).

Studies, and L.A.'s own numbers show that shelters that do provide services and conform to higher quality standards are more successful at getting people into permanent homes.

Those significant differences in success rates are a huge deal when you take into account that thousands of people are newly becoming homeless each and every year in L.A.

For any homeless person that gets permanent housing, there's another person becoming homeless to take over their shelter bed.

So unless a shelter can get people out of homelessness, the need for beds will only grow.

But aside from all that, providing shelter space for every single homeless person in Los Angeles has never been a goal for the city and probably never will be.

WAIT, WHY IS IT NOT THE GOAL?

First, look at the cost.

The entire general fund for the City of Los Angeles this past fiscal year was $5.83 billion, meaning the city would have to dedicate 11 percent of its general fund to shelters just to get them up and running.

WHAT ABOUT ALL THOSE HOMELESSNESS FUNDS VOTERS PASSED?

The City of L.A. has $1.2 billion in bonds over ten years thanks to the voter-approved Proposition HHH. That money, however, legally must go to constructing permanent housing for the homeless and low-income renters. Shelters beds don't count.

L.A. County also has some new resources in the form of Measure H, a ¼-cent sales tax passed in March 2017 that's expected to generate $355 million annually until it expires after a decade. If that number looks familiar, it's because it's about the same estimated annual cost for operating a shelter system for the city's homeless.

Some Measure H money is going to shelters, but the money belongs to the entire county, not just the City of Los Angeles. And it's funding all kinds of things, from eviction prevention services, to permanent housing, to temporary rental subsidies, to teams of people who sign eligible homeless people up for veterans and disability benefits. In other words, that money is spoken for.

SO WHY DID THEY EVEN CALCULATE THIS $657 MILLION ESTIMATE?

The City Council asked for it, back in February.

In a motion authored by Council Member Mike Bonin, the city council decried the lack of shelter beds for homeless:

"Even though people are dying on our streets, and tens of thousands of people are living in tents in front of schools, residences, playgrounds, and businesses, the effective answer from the City of Los Angeles for the past decade has been 'sleep on the sidewalk.' That's cruel. That's wrong. And that was supposed to change."

The motion demanded a plan and cost estimate for sheltering 100 percent of the city's homeless population by December 31, 2018.

WHERE WOULD SHELTERS GO?

Another huge issue, is finding sites for all these new shelters. LAHSA estimated the city would need 197 new shelter sites.

That could be a problem, considering L.A. currently has plans to build 15 new temporary homeless shelters — and is struggling to find a single neighborhood that will agree to host one.

L.A. Mayor Eric Garcetti announced the proposal earlier this year to build a shelter in every city council district in exchange for stepped up sanitation services and a guarantee that encampments would not be allowed in the shelter's neighborhood.

So far, no neighborhood has stepped up to take that deal, and the first proposed site, in Koreatown, is drawing protests.

THE OTHER ISSUE IS PHILOSOPHICAL: LOCAL OFFICIALS DON'T BELIEVE SHELTER IS THE ANSWER

L.A. has said it doesn't want to go the route of New York City, where shelter costs eats up billions of dollars a year and reportedly make it difficult for the city to invest in other kinds of programs that would reduce homelessness.

The overarching goal here is to get people off the streets permanently and then move towards preventing more people from falling into homelessness in the first place.

If the city and county were to devote the majority, if not entirety of their resources to shelters, that plan goes away.