A Frank History Of The Dodger Dog: A Ballpark Classic By LA, For LA 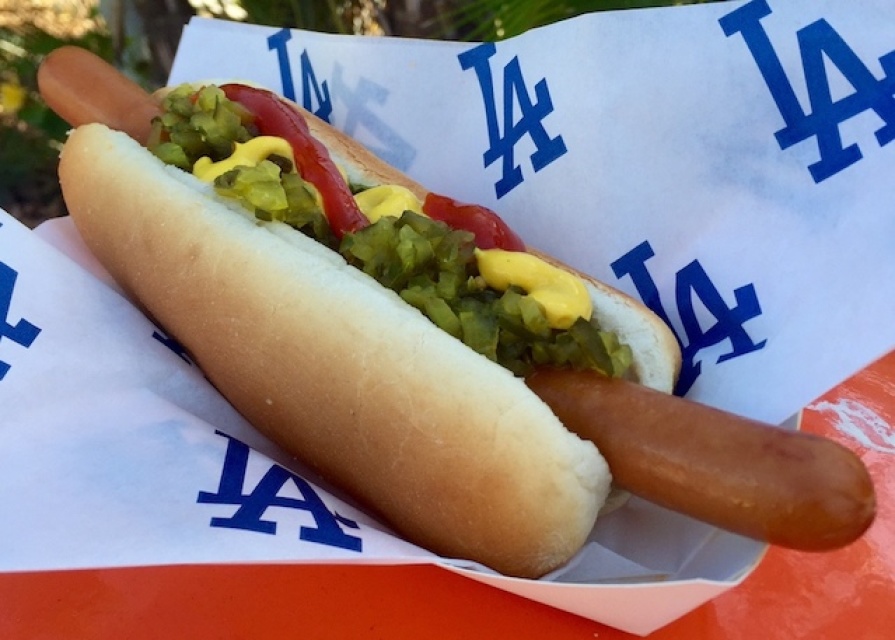 It's baseball season in Los Angeles — that magical six (but hopefully seven) months when Dodger fans pile into Chavez Ravine to root for the Blue Crew. For many fans, a trip to the iconic ballpark isn't complete without chowing down on a Dodger Dog.

The Doger Dog is one of the most iconic team dishes of any sports league but it's come to mean more to fans than just a snack during the seventh-inning stretch. KPCC's Take Two took a trip up Vin Scully Avenue to find out where the local culinary curiosity came from and how fans formed such an emotional connection to a ten-inch frank.

DAWN OF THE DOG

The Dodger Dog seems like it would be as old as the Dodgers themselves, but the team's signature snack was born and bred in L.A. — though there was some East Coast inspiration. When Dodger Stadium opened in 1962 following the team's move west from New York, the team concessions director, Thomas Arthur, wanted to capture a little bit of that old-school Brooklyn charm.

Los Angeles Dodgers team historian Mark Langhill holds up a two-page spread about the Dodger Dog. (Photo by Julia Paskin/LAist)
New York's Coney Island was known for their "footlong franks," and while Arthur planned to borrow the moniker, the actually hot dog measured in at ten inches. To quell the inevitable customer complaints about those two missing inches, the Dodger Dog moniker came to Arthur's mind and L.A. has never looked back.

"It's simply a hotdog but there's a romance about that title — the Dodger Dog," said team historian, Mark Langhill. "It's part of the organ music, the souvenirs, saving your ticket stub. The Dodger Dog was a major part of growing up as a Dodger fan in Los Angeles." 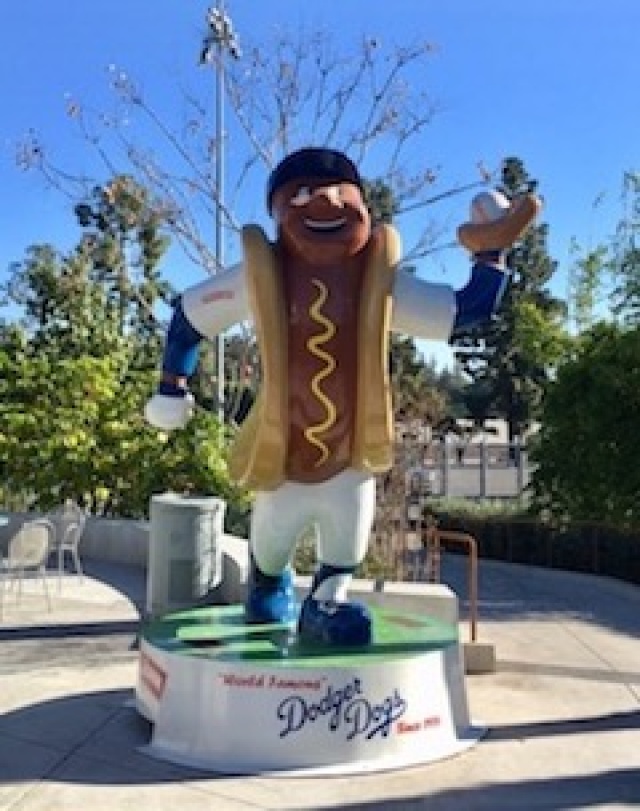 The beloved Dodger Dog has its own statue at Dodger Stadium. (Photo courtesy of the Los Angeles Dodgers)

FROM THE BALLPARK TO YOUR LIVING ROOM

Farmer John wasn't the first dog to grace the Dodger bun but company became the official supplier at the close of the 1960s. "Farmer John is the one that made it popular in the stores because you could get it at the game but they would sell it at the supermarket," Langhill said.

The idea of bringing the ballpark to the kitchen took off and fans flocked to buy Dodger Dogs to grill up while taking in the game at home, making Farmer John a brand name throughout Southern California.

By the 1990s the Dodger Dog's rise to fame earned its own corner of team merchandise. As the bobblehead craze grew, the Dodger Dog doll was born, Langhill said. The frank even worked its way into the official history of the franchise.

"We had your typical hall-of-famers like Duke Snider and Sandy Koufax but we dedicated a two-page spread to the Dodger Dog," Langhill said. "You name all the iconic things about Dodger baseball, that hot dog ranks along Don Drysdale, Orel Hershiser and Clayton Kershaw."

The Dodger Dog has maintained its classic look and feel since it hit concession stands in the early '60s, but keeping up tradition hasn't forced the Dodger kitchen to sacrifice flavor and creativity. You can always find the "classic" Dodger Dog and its relatives, the bacon-wrapped and Super dogs. Kosher and Veggie dogs are also available.

The "Doyer" Dog is another fan favorite. An homage to the Spanish pronunciation of the team name, this version features the Super Dog, which, unsurprisingly, is larger than the traditional dog. It's topped with chili, nacho cheese, chopped tomatoes, onions and jalapenos.

For some series, Dodger Executive Chef, Ryan Evans concocts specialty dogs inspired by the opposing team. When the Rockies were in town, Evans developed a Chili Colorado Dog.

"It was just like if you were getting Chili Colorado at a Mexican restaurant," said Evans. "With the corn, cilantro, and crema on top, it was just fantastic."

The Phillies game led to a philly cheese steak on a Dodger Dog and the freeway series with the Anaheim Angels visit brought about a B.L.T. Dog, with everything those initials promise.

THE TASTE OF L.A. BETWEEN A BUN

Evans says the culinary landscape of Los Angeles has a heavily influence on the Dodger menu. Local eateries and street food are a frequent inspiration but so are the diverse communities surrounding the stadium.

"People from Los Angeles love to eat good food," Evans said. "It makes my job easy but then again, we have to be creative." Perhaps that's what led to the popular specialty item, the Cheeto-lote, a hot cheeto-encrusted elote. "What better way to show respect to the L.A. culture than developing an elote here," Evans said, beaming with culinary pride.

How do YOU eat your #DodgerDog? 🌭 @amartinezla nibbles off the ends first and calls it a pre-hot dog.

As the person in charge of protecting the Dodger Dog's authenticity, Evans will tell you the Dodger Dog has a unique taste as far as other franks go.

"It's made from beef and pork so it packs a different flavor than an all-beef or even a Hebrew National," he said, noting that all the dogs are seared on the flat top and all the buns are steamed. To maintain that pure Farmer John flavor, Evans said fewer toppings are best.

In the '90s, the Dodgers felt the wrath of their fans when they introduced boiled Dodger Dogs. Customers revolted and demanded that their dogs be grilled. It was a dark time in Dodger history.

Today, Chef Evans agrees that grilling is the way to go. "When you're searing a dog, you're enhancing all those flavors that the sausage-maker has developed," he said. "When you heat those up that's what you get— the true flavor of the dog."

But if you have your own special way of dressing up your Dodger Dog, Evans won't argue. "This is a dog for the people," he said. "And however they want to eat it, I support it."