Why LA's Citadel Looks Like An Ancient Assyrian Palace 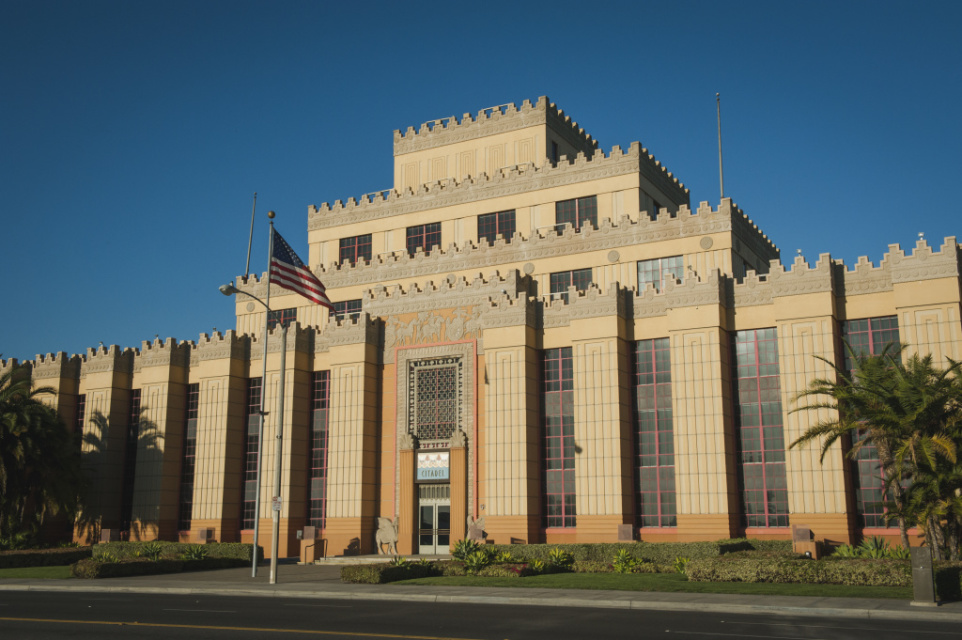 The Citadel outlet mall off the 5 Freeway. (Photo by Andrew Cullen for KPCC)

If you've ever driven the 5 Freeway near the City of Commerce, you've seen it: a massive, regal building, complete with concrete battlements and tall, winged figures. It looks like something out of an old Hollywood epic, but it's the Citadel — L.A.'s only outlet mall.

The Citadel's wall was built in the 1920s when that style of architectural grandeur was taking off, according to Adrian Scott Fine, director of advocacy for the Los Angeles Conservancy.

"Being a place of filmmaking and movie-making, it was also about fantasy," Fine said. "Places like the Mayan Theatre, the Chinese Theatre and other places that were evoking a style from an ancient past, but kind of doing their own twist on it. Very much an L.A. way of doing things."

Proliferating that Hollywood feel were architecture firms like Morgan, Walls & Clements. They built the Mayan and El Capitan theaters. And yes, that original Citadel wall. 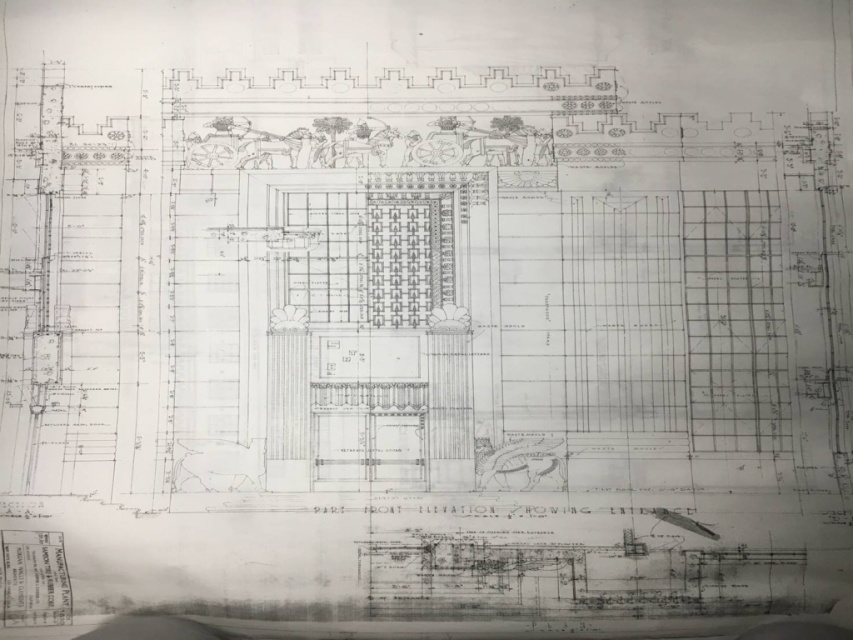 At the time of its construction, Commerce wasn't a city yet. The area was industrial. But there's a reason such a spectacular structure was built in an industrial place.

In 1929, just before the stock market crash, Adolph Schleicher, founder of the Samson Tire & Rubber Company, decided to build a factory in Los Angeles. And he wanted to go big. Palace big.

Specifically, like the kind built for the Assyrian King, Sargon II. 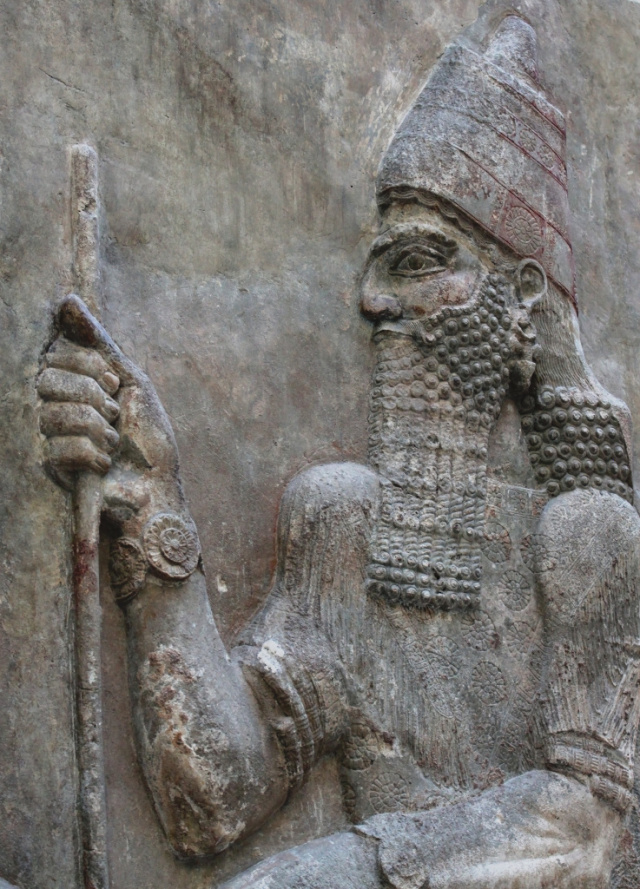 Never mind that Sargon's reign ended in 705 B.C. It coincided with the theme Schleicher was going for: Samson — a biblical figure known for his great strength.

"There's the idea about strength in the tires, and the tires are the foundation for your car. So there's some correlations that probably exist," said Fine. He also said the factory's style could point to the discovery of King Sargon's palace, which was found excavated in the late 1920s

"There was a lot of interest in [those kinds] of antiquities during this era. People were gravitating towards this architecture, and it was all about exotic cultures from far away places bringing it to L.A."

Unluckily for Schleicher, the economy's foundation crumbled with the stock market crash, which put a damper on the Samson tire business. Soon after the factory opened, he was forced to sell it to the company now known as Uniroyal. 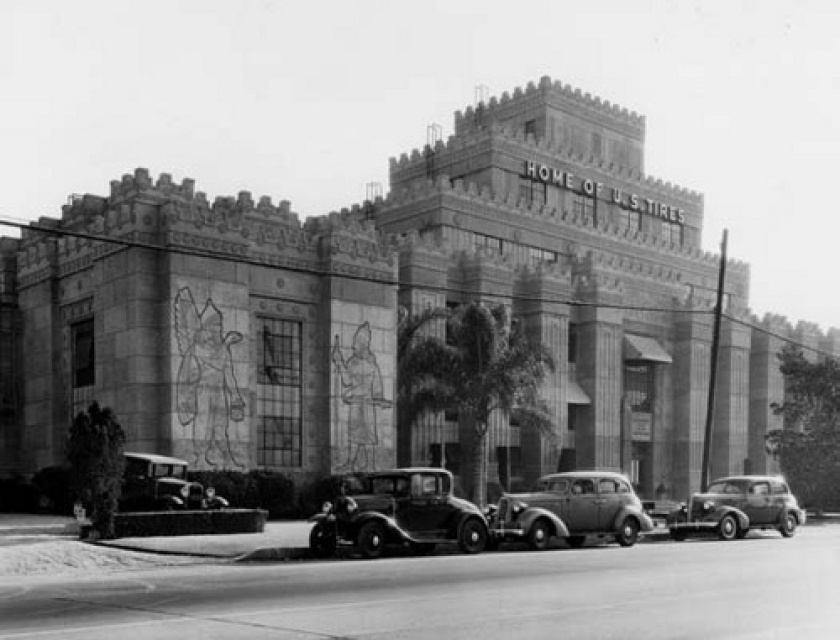 Photograph of an exterior view of the Home of U.S. Tires, [s.d.].(Via University of Southern California Libraries and California Historical Society)

After World War II, the tire industry bounced back and L.A's automotive industry took off. The Commerce area was second only to Detroit in car manufacturing up until the 1960s.

Then the factory crashed again. It became an abandoned eyesore, dulled by pollution.

The City of Commerce purchased it in 1983, and a development company, Trammell Crow Co., later bought it. They transformed it into a mix of stores, office buildings, even a hotel that opened 28 years ago. 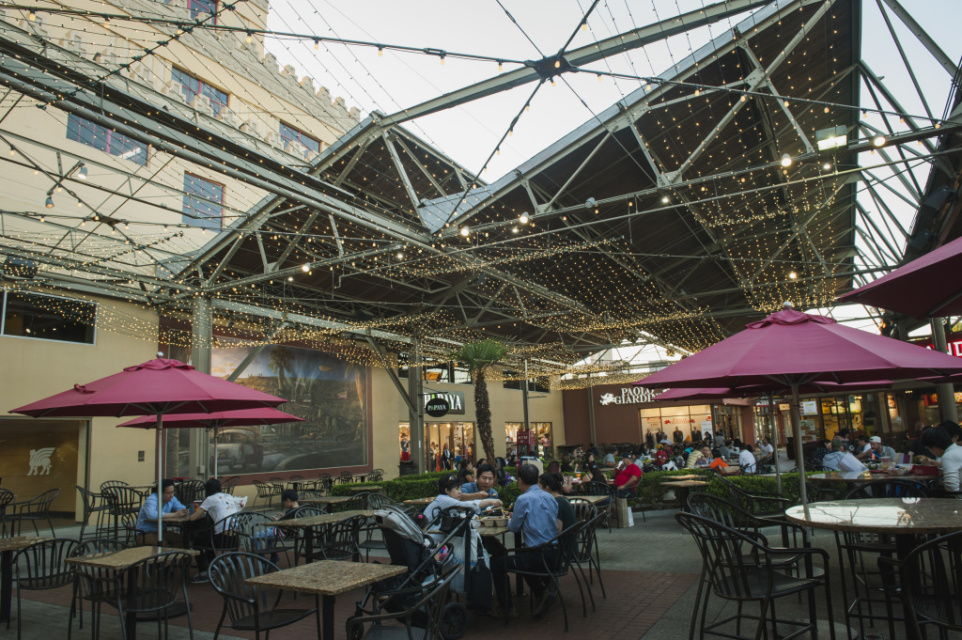 The original steel roof beams from the tire and rubber factory that later became the Citadel Outlets are still visible above the mall's food court in Commerce, California. ( Photo by Andrew Cullen for KPCC)

Louis Troiani was the lead architect behind the Citadel's most recent transformation in 2003.

Now it's the place to go to find brands like Coach, Levi's and DKNY on the cheap. Those 30-foot-tall LED screens just above the wall, they're Troiani's babies. And a good way to show commuters the palace is open for business.

Next to each of those screens is a large winged creature.

The creature's official name is a Lamassu, an ancient Assyrian protective deity with cloven feet and a human face. Troiani added those, too. And if you happen to catch a glimpse of them at sunset, the light and shadows reveal extra textural details.

"If you were to see them up close, the veins in the legs," Troiani said. "It is truly an exact replica of the original."

But the wall also has hidden gems, like a series of triangular engravings that literally tell Sargon's story. 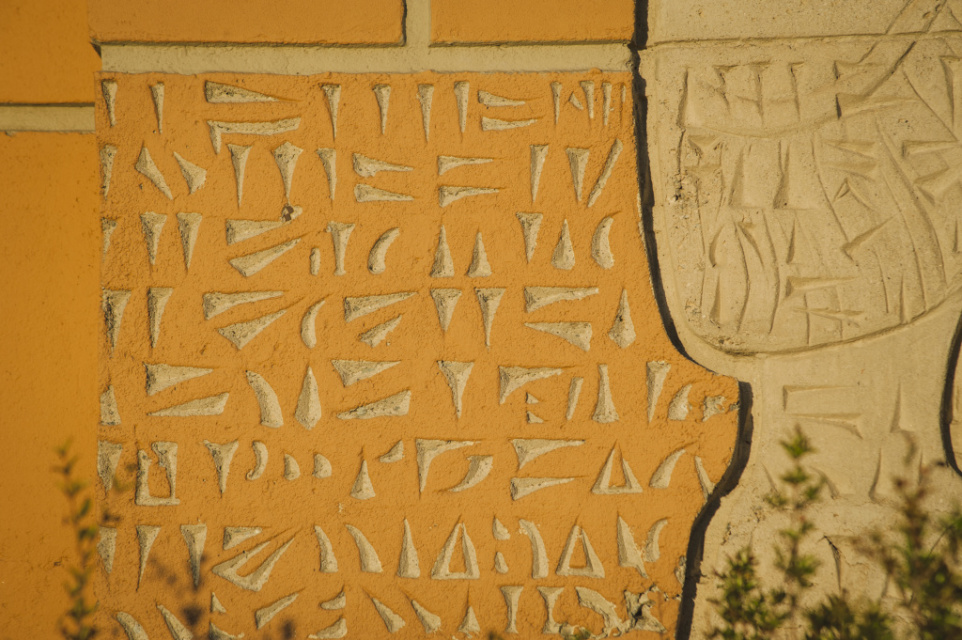 A facsimile of cuneiform writing decorates the facade of the Citadel Outlets in Commerce, California. (Photo by Andrew Cullen for KPCC)

"That is the original language of the Assyrians which is called cuneiform. This language helped tell [King Sargon's] story in a written format while the visuals gave you a taste for the story they were trying to tell," Troiani said.

There are also genies embedded in the Citadel wall. They were military advisors back in the day. 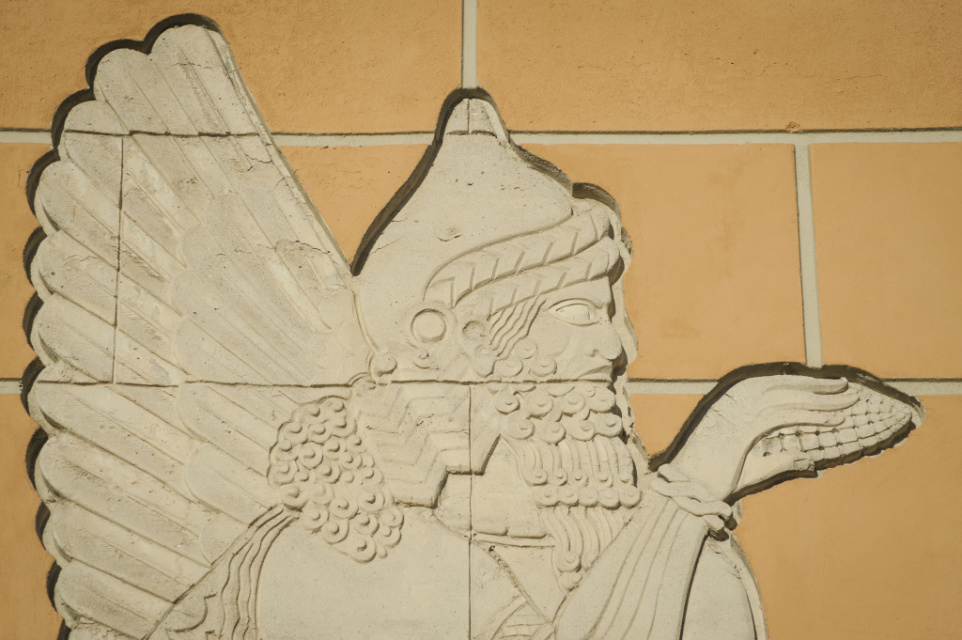 A concrete figure representing a genie, modeled on ancient carvings, decorates the Citadel Outlets in Commerce. (Photo by Andrew Cullen for KPCC)

Editor's note: A version of this story was also on the radio. Listen to it here on KPCC's Take Two.