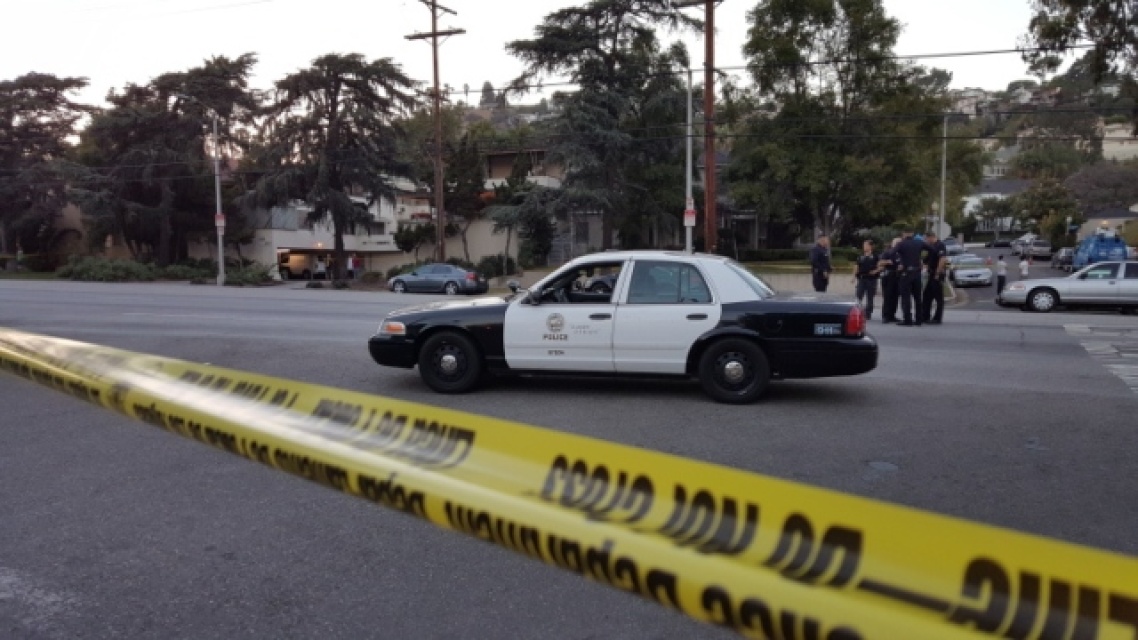 After each police shooting, investigators flood the scene. They knock, door-by-door, hunting for witnesses. They mark each bullet's cavity and carefully estimate the flightpath. They collect and bag, swab and seal. They sit face-to-face with the officers involved and question them about the moment the situation turned deadly.

Hundreds of pages of information can be amassed — and immediately shut away from public view.

I've spent most every working day for nearly three years reporting on police shootings and civil rights abuse claims in Southern California. I've found much of the information about officer conduct is often kept secret under California law, making it difficult to hold our law enforcement and elected officials accountable.

But that is changing. On Aug. 31, the state legislature approved SB 1421, a bill that would open up some police records. Gov. Brown, who had until the end of September to act, signed the legislation into law on Sept. 30.

It's considered a significant victory by advocates of more transparency and it marks a major change for a state that until now had been one of the most secretive in the nation when it came to police behavior.

HOW WE GOT HERE

It wasn't always like this in California. Coroner's inquests, sometimes televised, were once routine in L.A. County, offering the public direct access to the accounts of the officers involved in a fatal shooting as well as witnesses and evidence, according to the L.A. Times, which reported the last inquest in L.A. was held in 1981.

Since then, access to information about police conduct of all kinds - from shootings to internal findings of misconduct — has become shielded from public view.

Denial sent by L.A. County Sheriff's Department after I requested information about the deputy shooting of Tennell Billups.

These restrictions can make it difficult for families of individuals killed by law enforcement to learn what happened to their loved one.

It was late summer 2012, and Ted had been struggling with heroin addiction. When the San Bernardino County Sheriff's Department arrived, Ted hid in nearby shed made from a shipping container.

The next thing Wann remembers was law enforcement stringing up yellow police tape. Her son was dead.

The description of events she got from officials left her unsatisfied.

"I was so mad I called the district attorney," Wann said. "I said: 'I can't get any answers from anybody.'"

According to a record from the San Bernardino County District Attorney's Office, Deputy Marc Beitler found Ted hiding between piles of hay. The deputy shouted commands and a struggle ensued. The officer punched Ted and struck him with his steel baton. According to the report, Ted picked up a shovel, pointing toward the officer.

The officer feared Ted would strike him, the D.A. report stated, and fired five bullets into the young man's body: his neck, shoulder, chest, top of the head and hand.

"They can have it all, but you can't have any. That's wrong."

Wann wanted answers about her son's death, but felt the department was more interested in protecting itself than figuring out what went wrong. Her son's shooting went under investigation, she said, and the department wouldn't let her see the police report.

So she decided to file a civil lawsuit. She and her husband were middle class, a homemaker and a heavy equipment operator. They tapped their savings to get the case through discovery, in which records from the sheriff's investigation into the shooting can be drawn out and officers questioned about what happened.

She gathered the courage to attend the deposition of the officer to "look him in the eye."

Uncovering the information about police conduct is not simply about trying to expose officer wrongdoing. It's can just as easily illuminate the dangers officers face and give insight to help protect them as well as civilians.

Our investigative efforts into police shootings began in 2015, not long after the police killing of Michael Brown lit a firestorm of protests. I joined a team of reporters who worked phones and pounded pavement to cover police shootings across Southern California: the death of an unarmed, mentally-ill man named Ezell Ford in South Los Angeles, 14-year-old Jesse Romero in Boyle Heights, the unarmed, homeless man Charly Keunang who was killed on Skid Row, and others.

But lack of public information made it difficult to inform the public about police shooting patterns on a larger scale - insights that could point to potential systemic flaws and policy improvements.

An excerpt from a records denial to KPCC from the Los Angeles County Sheriff's Department.

To get answers, we turned to the few records we could get our hands on: slim letters from the Los Angeles County District Attorney's Office from January 1, 2010 and December 31, 2014. We found:

SPOTTING TRENDS CAN LEAD TO CHANGE

One trend we noticed was deputies at sheriff's departments in Los Angeles and San Bernardino Counties shooting into moving cars.

Shooting into a moving vehicle is inherently dangerous: the car could spin out of control and injure bystanders. If car was approaching them, experts concluded, officers would be better off moving out of the way.

In fact, the LAPD had changed its policy to restrict shooting at moving cars after officers shot and killed a 13-year-old unarmed black boy, Devin Brown, in 2005. According The L.A. Times, the boy was backing a stolen Toyota Camry toward a police car and was shot by an officer seven times.

Despite public outcry, the practice continued in nearby jurisdictions. In Los Angeles and San Bernardino, deputies were shooting unarmed motorists, according to district attorney records. Officers often said they feared the car would run them over and fired to stop the threat.

In 2015, a San Bernardino sheriff's deputy in a helicopter shot a barrage of bullets into a car fleeing law enforcement on the 215 freeway. The car ultimately collided with a nearby vehicle - with family inside. Jose Villegas, the father of the family, told me the entire family suffered injuries.

The risks, he said, should have been clear to law enforcement.

"They need to change," Villegas said. "Change the tactic."

The San Bernardino County Sheriff's Department said the officer opened fire from the helicopter to protect drivers on the freeway since the car was heading against traffic at high speed.

What happens when information is held up to public scrutiny?

After our story about Los Angeles County aired, Sheriff Jim McDonnell thanked us for pointing it out.

"It's certainly something I want to take a much closer look at,"McDonnell told KPCC's AirTalk in 2016. "There's universal agreement that it is not particularly effective."

His department's policy has since changed, essentially banning shooting into moving vehicles unless another deadly weapon is present.

WHY THEY FIGHT TO SHIELD POLICE RECORDS

Ron Hernandez, president of the Association for Los Angeles Deputy Sheriffs, a union, explained to me that closed police records ensure due process for officers accused of misconduct.

Law enforcement groups argue these protections safeguard an officer's privacy and prevent a so-called "trial by media," in which unproven claims can taint an officer's reputation - or, they say, put officer safety at risk.

"Nobody in law enforcement wants to hide some guy that is a bad cop," Hernandez told me earlier this year, adding that records can be drawn out in court while keeping away "witch hunts."

In many other states, much more information is made available to the public about an officer's conduct, calling into question whether concerns about officer safety are overblown. Many of these states have measures in place to protect privacy and due process, making records involving unsubstantiated complaints or active investigations confidential, according analysis of state law done by our colleagues at WNYC.

California, home to more than 75,000 officers, wasn't among any of them.

Gov. Brown signed SB 1421 into law on Sept. 30, a few weeks after it passed the legislature. The legislation opens up records involving officer shootings, as well as incidents in which an officer's use of force resulted in death or in great bodily injury.

The measure also requires the disclosure of records when a law enforcement or oversight agency has officially determined that an officer was guilty of dishonesty or had engaged "in sexual assault involving a member of the public."

If an incident sparked a criminal investigation, an agency could further delay disclosure if it determines that it "could reasonably be expected to interfere with" a future prosecution.

Under previous law, California was one of the most "secretive states in the nation" when it comes to officer misconduct and uses of force, according to an analysis of the bill. It's a level of confidentiality that did not exist for other types of public employees nor for other professions that can affect life or liberty, such as doctors and lawyers.

When it comes down to it, opening up information introduces unknown liability for law enforcement agencies, exposing them to costly lawsuits, putting the careers of officers found of misconduct on the line and embarrassing elected leaders. But it's the same information that can lead to change. 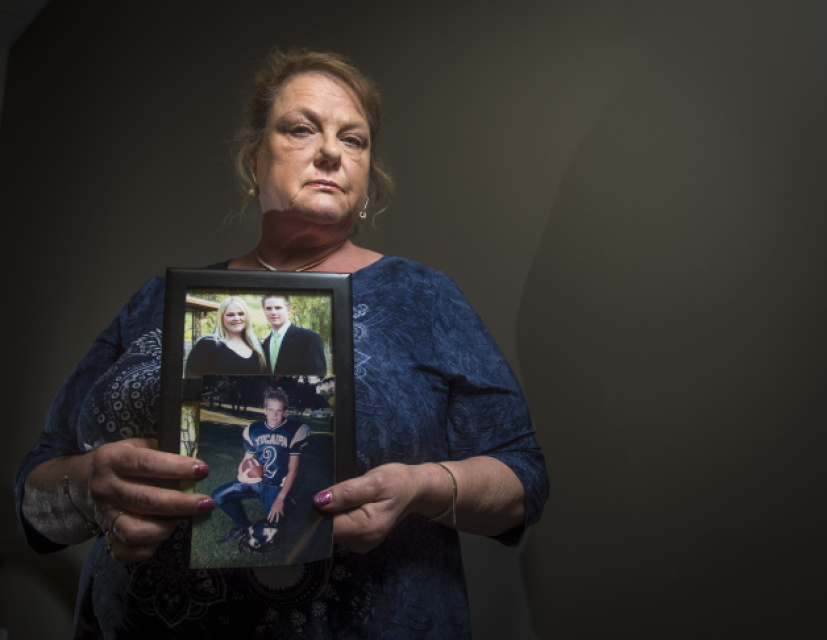 Katherine Wann holds a photo of her son. (Photo by Frank Perez / For KPCC )

Wann, the mother in Yucaipa, eventually settled the case she brought against San Bernardino County for her son's death. She'd signed a protective order earlier in the lawsuit - common in such cases - promising not to make public records about the officer, including past training and conduct.

Her attorney, Jorge Gonzalez, told me attorneys for law enforcement often try to expand the protective order to any document about the shooting, stamping "confidential" on sheet after sheet.

"They do not want the public to know what really goes on," Gonzalez said. "It's at odds with what people see as justice."

"If you believe in transparency, release everything: the good and the bad," he said.

Eventually, Wann had learned enough to satisfy her curiosity. It brought a semblance of closure. They settled for $600,000, and the officer's deposition remains in the court file for the world to see.

Wann came away with the belief that the officer could have made different choices after her son hid in the shed. What if officers had waited? Ted wasn't going anywhere, she thought.

"It could have totally been prevented," Wann said.

Katherine Wann's story was originally published as part of a reporting partnership between KPCC and The San Bernardino Sun. Beatriz Valenzuela contributed to that reporting.

Sept. 4: This article was updated to reflect the state legislature's approval of SB 1421.

Sept. 30: This article was updated to include Gov. Brown signing SB 1421 into law.

This article was originally published on June 20.

Clarification: This article has been amended to note that the driver in the San Bernardino County helicopter shooting was driving against traffic at high speed.

Investigative journalism matters. Here at LAist, we believe Angenelos deserve hard-hitting reporting that holds officials accountable and shines a needed light on our government and public institutions. Now that we're part of KPCC, those stories are made possible by generous people like you. Independent, local journalism isn't cheap, but with your support we can keep delivering it. Donate now.