How 4 Teen Photographers Got Their Images Into The Getty 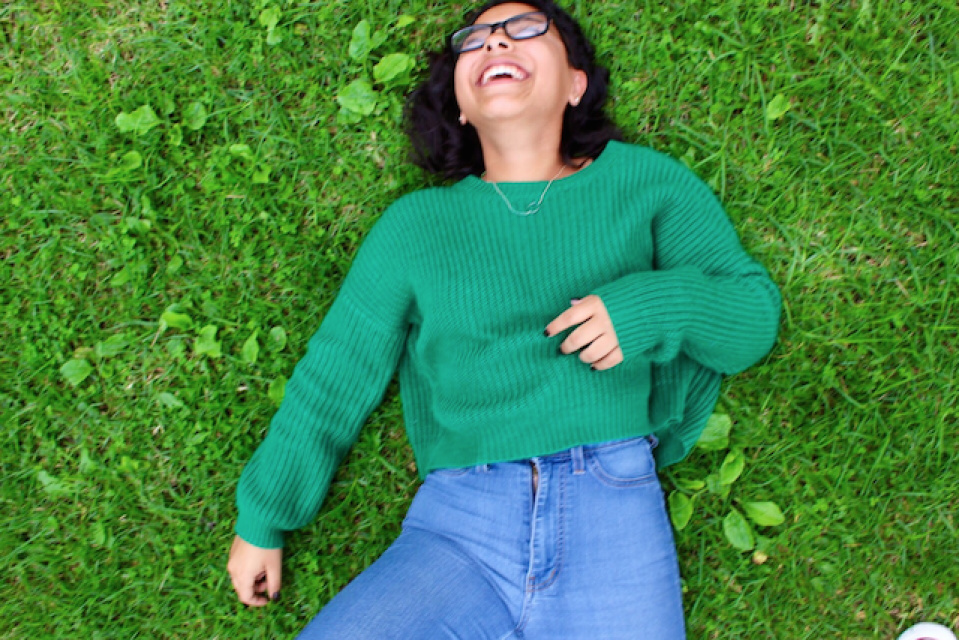 Nearly two dozen talented Los Angeles teenagers just got a major jumpstart on their visual arts careers. They're part of a new installation at the Getty Center.

Each of the teens featured in LA #UNSHUTTERED: Teens Reframing Life in Los Angeles identified a social issue and explored it through the lens of a camera.

We talked to four of them — Melissa Barales-Lopez, Mia Bella Chavez, Lauryn Cardiel and Cassidy Rodriguez — who are alumni of Las Fotos Project, an organization that mentors girls in photography.

"It's been a really rewarding experience to have such a prestigious art institution invite regular teenagers in," Barales-Lopez told KPCC/LAist. "To have that platform to explore issues that most often aren't depicted in your typical art museum like gentrification, like the intersections of masculinity, like women of color inside the workplace, it engages a wider audience."

Barales-Lopez, Chavez, Cardiel and Rodriguez will also spend part of the summer participating in the Getty's Student Gallery Guide Program interns at the museum. The exhibition runs through September 9 but they gave us a private tour right now and talked about their images. 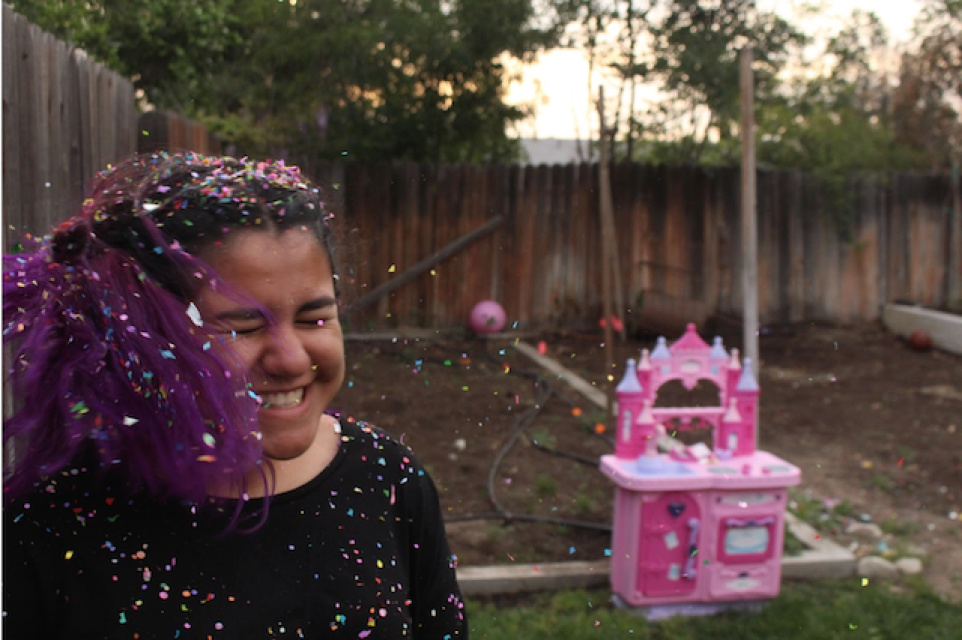 Flintridge Preparatory School student Mia Bella Chavez is drawn to color but during Unshuttered, she focused "on hair and how it relates to identity:"

It's me and my dyed hair, which is a big part of my identity ... This was taken on Easter, which is why I have a bunch of confetti on me because we use — we like hit each other with cascarones [eggs filled with confetti]. And that's a really big part of who I am as a Latina.

I just had it on a tripod and ... I played around with the settings a bit and then I put myself in front and just moved around, and so there was probably about 50 images very similar to this. This is the one that I was most proud of, because there is definitely a lot of motion involved and you can kind of see confetti flying all around. 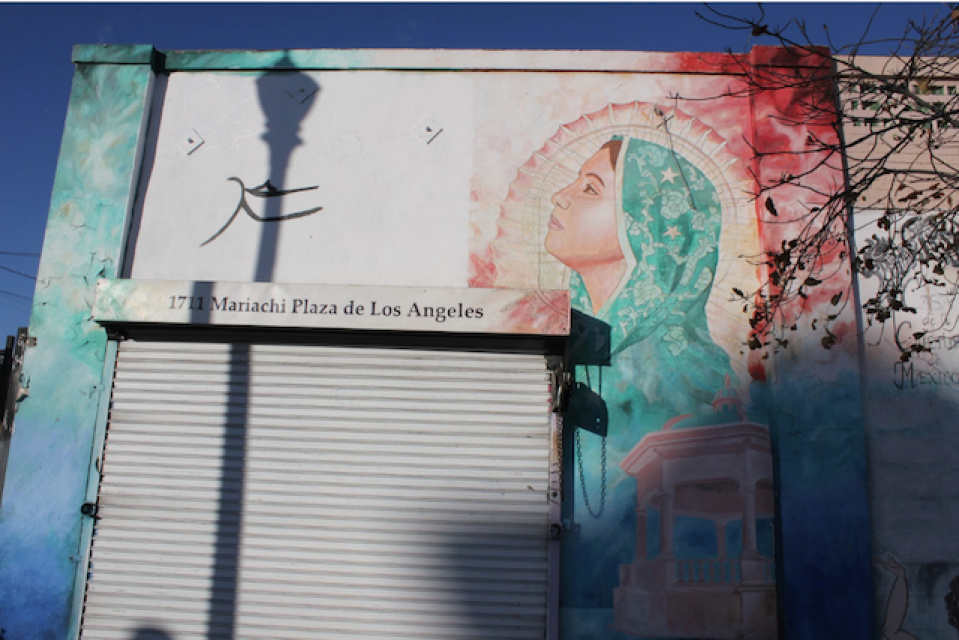 Lauryn Cardiel goes to Ramon C. Cortines School of Visual and Performing Arts. She said she wanted to document "the outskirts of LA":

When most tourists go there, or when people are planning to move there, they think about the general area of either downtown Los Angeles or Hollywood or, you know, the mainstream. So, I wanted to photograph a sense of community with where I live, so that's why I decided to take the picture of the virgen because it's represented in a lot of Latino families, especially with the mothers. They tend to put it up in, like, the living room.

I liked how the shadows went on the mural ... It represented the time of day, but it also was strong, in a sense, to me. 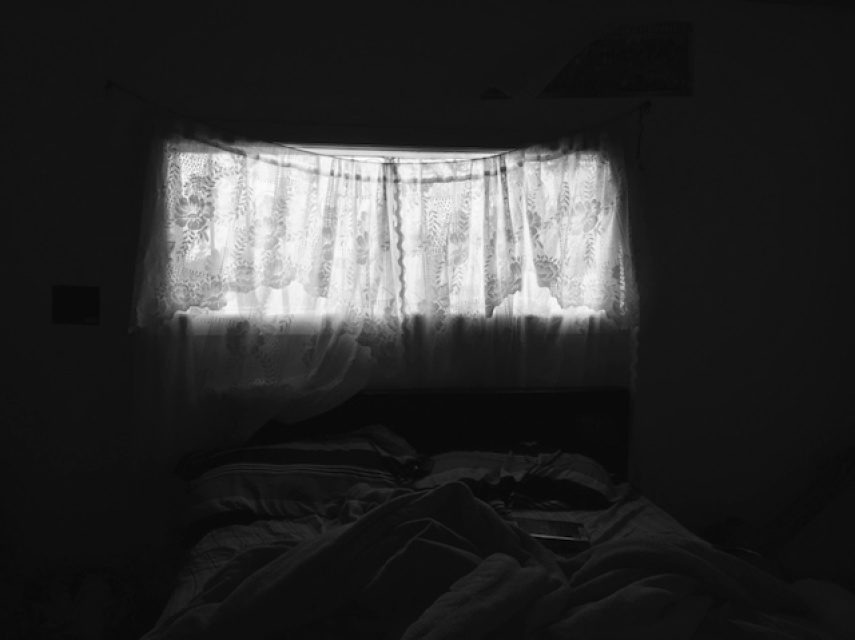 Most of Barales-Lopez's photos feature bright colors and reflections of hispanic culture, but she said the Unshuttered program pushed her out of her artistic comfort zone. (Photo by Melissa Barales-Lopez)

Melissa Barales-Lopez just graduated from James A. Garfield Senior High. She gravitates towards bright colors and moments that reflect her culture:

Kind of the opposite of that, though, is the other photo that I will be exhibiting which is really a dark room. And the main focus is kind of like these windows with these lacey type of curtains. And I think that's a representation of how much I've grown as part of — while being in the Unshuttered program — because I never considered myself an artist who worked in black and white, but I became comfortable doing so during these couple of weeks that I was with the Getty Museum because of their mentorship and really their encouragement to explore different avenues of photography.

I didn't take the photo in black and white. I edited it afterwards, but I think it being in black and white draws the viewer to really the only light source inside that room, which is my brother's room. I think really there's just something so ... dreamlike.

Admittedly it's not like my other photos ... it's not a representation of Hispanic culture. But if anything, I want people to find a sense of - I don't know - peace and serenity when they look at this photo, because I think it very much is that, you know, it's just a picture of a room, the bed, I mean, I'm not sure if you can notice. But beneath the light, neath the window, there's an unmade bed, you know, and there's just a typical sense of calmness that I think really envelopes this photo really well. So that's what I hope people draw away from it.

I've explored posed portraits and candids as well. [Candids] show more of a comfortable a comfortable setting and they give off like a feeling of comfort and you can really see that the photographer is somewhat connected to the person.

I think the person smiling really stands out to me because although the green stands out as well. You can see that the person looks genuinely, genuinely happy.

Unshuttered also has an online and mobile app component, with tips and challenges for young photographers.