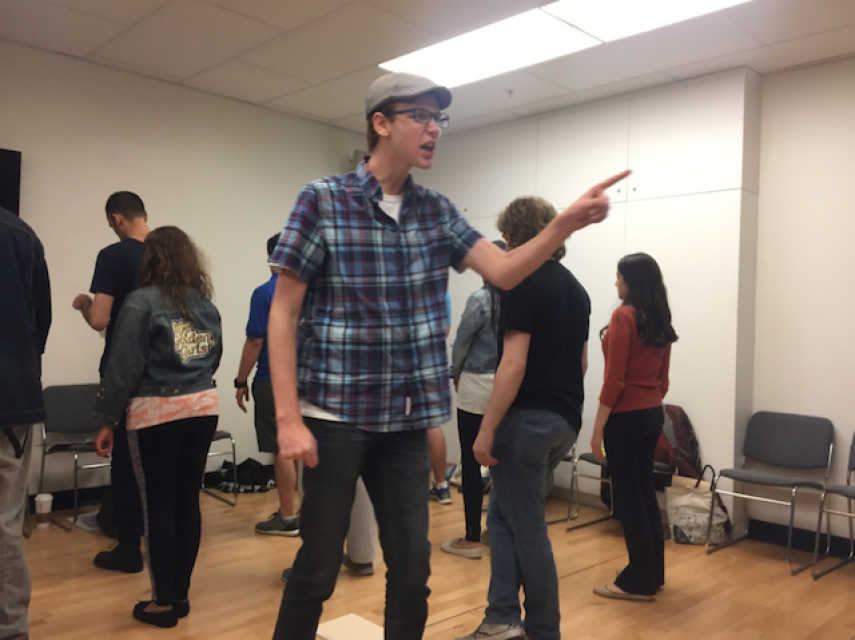 Coby Bird and the rest of the cast of "185 Wilshire: A Love Story" rehearse at The Wallis. (Photo by Carla Javier)

Actor Coby Bird is a teenager with a SAG card and some pretty impressive gigs on his IMDB page, including an appearance on ABC's "The Good Doctor."

"Watching Coby go from a kid who watched movies to a kid who is now making movies and making TV shows and on stage and telling stories is amazing," his mom, Rachael Bird, said.

Bird says he likes to listen to Frank Sinatra, Ray Charles and Japanese pop music. But in the group's latest show, "185 Wilshire: A Love Story," he got to rap:

Folks have told me they liked seeing the subjects of my #artsed profiles for @theframe in action, so here's another: actor Coby Bird, 16 pic.twitter.com/wgb9WFukfx

I met up with actor Coby Bird and the founder of Miracle Project, Elaine Hall, before a rehearsal to talk about acting and autism. Our conversation has been lightly edited and condensed for clarity.

THE ORIGINS OF THE MIRACLE PROJECT

Elaine Hall: I was a TV and film acting coach, and I worked with some of the biggest and brightest child stars, and what I wanted more than anything was a child of my own. I wasn't able to give birth biologically, so I adopted a little boy from Russia. And when he came to me, he spun around in circles. He stared at his hand for hours at a time. He banged his hand. He tantrumed, Today, we'd know that that's autism. But back then — this was 22 years ago — and I didn't know from autism.

All I knew was that I wanted to bond with my son, so I joined him in his autistic world ...So I ... started learning about autism. The more that I'd learn, I'd apply it in a way that I understood, which was through creativity, and I started training my creative friends — actors, singers, dancers, musicians — about autism, and how to join a child's world. We did that with my son 10 hours a day, seven days a week, and he started to merge into this typical world of ours, still with autism, still non speaking, and communicative, but happy.

THE FIRST TIME YOU CAME TO REHEARSAL

Coby Bird: First, it was just like introducing ourselves and playing games. It was the first time I ever did something like that. Everyone was really, really kind. It almost felt like I was watching a TV show because everyone was just so kind, so genuine. It was really cool.

WHAT WAS YOUR [FIRST] ROLE?

Coby Bird: I was a ukulele player who sold coconuts in Hawaii.

Elaine Hall: I saw how great Coby was doing ... so I invited him to be in this more advanced group over the summer, where we were going to learn all the songs from this anti-bullying play. And what was your role?Coby Bird: A bully. I was a bully, yeah. My first big role.Elaine Hall: And how did you feel about playing a bully?

Elaine Hall: And then what happened? Well, we talked about how by playing a bully it might be able to help other kids understand why people bully, right?Coby Bird: Being a bully was hard for me, but I used all my experience in being bullied, and I showed what people did to me.

HOW DID IT FEEL TO PERFORM?

Coby Bird: The first time was hard for me.

WHAT DO YOU HOPE THE AUDIENCE GETS OUT OF THE MIRACLE PROJECT SHOWS?

Coby Bird: I want people to understand that we don't want you to just say, "Oh, we accept you." We want you to prove to us that you accept us ... Show me. Prove to me that you accept me for who I am. We want more than awareness. You see that all over ... We just want to be normal people.

In less than one week we are opening "185 Wilshire: A Love Story" I cant believe it's already here! If you want tickets go to https://t.co/jxucsgKRHp. Come see me in Beverly Hills June 1-3 #themiracleproject #autism #includeus #autismdoesntstophim #autismdoesntstopus pic.twitter.com/mGaFYwrTNt

HOW DOES IT FEEL TO DELIVER THAT MESSAGE?

Coby Bird: It feels good because we're saying what we feel inside, and we're showing it all on the stage.

HOW DO YOU THINK YOUR EXPERIENCES HERE MADE [YOUR CAREER] POSSIBLE?

Coby Bird: Everyone was so accepting of me, not telling me I couldn't do this. That gave me all my confidence, and it made me come out of my shell. Telling me I could do this. I could talk more. I can sing more. I can be social more. Basically, they showed me it's okay to have autism because basically you're like everyone else.

Elaine Hall: We actually love autism. I think that people with autism are the most extraordinary, sensitive, kind, wonderful human beings I've ever had the privilege to know, and what we set out to do with The Miracle Project is really destroy a lot of the myths about people with autism. There's this whole thing of people with autism lack an empathy, and it's just not true because they're so kind and supportive of each other ... So we're really working towards demystifying what others feel that autism is, and then we present it on stage.

A version of this story was also on the radio. Listen to it here (and hear Coby rap!)