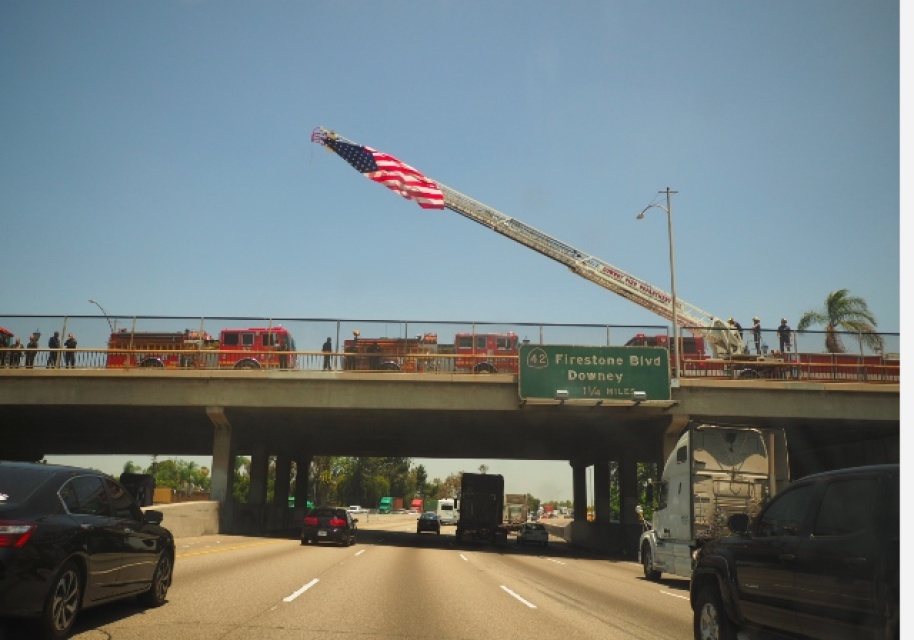 In a show of respect, firefighters lined the overpasses in Long Beach ahead of the procession carrying the body of slain firefighter Capt. David Rosa. (Meghan McCarty Carino / LAist)

An elderly man has been arrested in connection with the fatal shooting Monday of a veteran Long Beach firefighter who was responding to an explosion at building housing low-income senior citizens. Two other men, a firefighter and a building resident, were also shot and wounded, authorities said.

Thomas Kim, a 77-year-old resident of the senior home, is being held on $2 million bail and faces one count of murder and two counts of attempted murder and arson. He'd been named earlier in the day as a person of interest in the case.

Authorities said Kim's only other offense was auto theft from many years ago. They said the explosion occurred in his unit where other suspicious devices were later found.

Capt. David Rosa, a 17-year veteran of the Long Beach Fire Department, was shot while responding to that pre-dawn explosion. He was taken to St. Mary Medical Center where he died from his injuries. Rosa, 45, has a wife and two children, according to fire officials.

It marked the first time since 1974 that a Long Beach firefighter was killed while on duty.

It is with deep sadness and tremendous grief that we announce that Captain David Rosa has died from injuries sustained from a gunshot wound he sustained at an emergency incident. Capt. Rosa is a 17 year veteran of our department and is assigned to Station 10. pic.twitter.com/np03fecLQb

The others shot in the incident were expected to recover. One, a firefighter identified as Ernesto Torres, was grazed by a bullet. He was treated and released. A resident of the building, described by authorities as an elderly man, was in critical but stable condition late Monday, according to officials.

The fatal encounter took place after firefighters were called to Covenant Manor, an affordable senior living facility in the 600 block of E. 4th Street in Long Beach. The gunshots began as firefighters responded to reports of an explosion in the early morning, according to authorities.

Police and SWAT officers then flooded the scene to search for the shooter. Traffic was shut down in both directions as officers investigated the homicide. The streets around the building were shut down for one block in each direction for many hours.

According to its website, Covenant House provides apartments for low-income seniors ages 62 and older, as well as younger disabled adults. Property records show the building has 100 units.

According to publicly available records, Kim had been living at Covenant Manor since 2013. His apartment is listed as being on the 10th floor.

Long Beach Mayor Robert Garcia said via Twitter that the city was "working with the seniors who have been temporarily displaced from their building due to today's tragedy."

Garcia said they were providing counseling, as well as health services, in partnership with the Red Cross. In an afternoon news conference, authorities said 80 seniors were out of their homes and currently staying at Silverado Park Community Center. 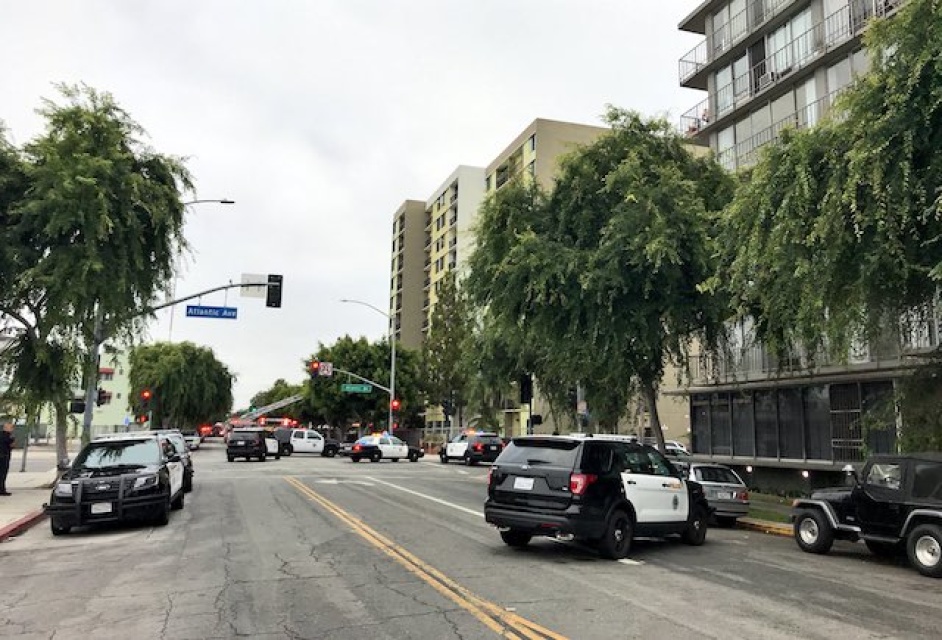 After word of Rosa's death spread, firefighters and others gathered at the hospital to pay their respects.

Dozens of somber observers stood by as a fire engine with the No. 10 — Rosa's last station number — on its front grill led a procession carrying his body to the coroner's office. On freeway overpasses around Long Beach, firefighters parked their trucks and waited to pay their respects.

Rosa grew up in Long Beach. Firefighters say he was well loved by his peers and known in the community for his outgoing personality. Over his years with the department, he worked in some of Long Beach's busiest fire stations and taught many new recruits.

It is rare for a firefighter to be shot and killed while on duty. Nationwide, 89 firefighters died while on duty in 2016, the most recent year fully reported by the U.S. Fire Administration. None of those deaths were the result of a shooting. Of the firefighters who died in the line of duty that year, 17 were fatally injured in the course of fighting a fire. Overall, most of the deaths, 43, were attributed to overexertion or stress.

This story was updated multiple times throughout the day as additional information became available.