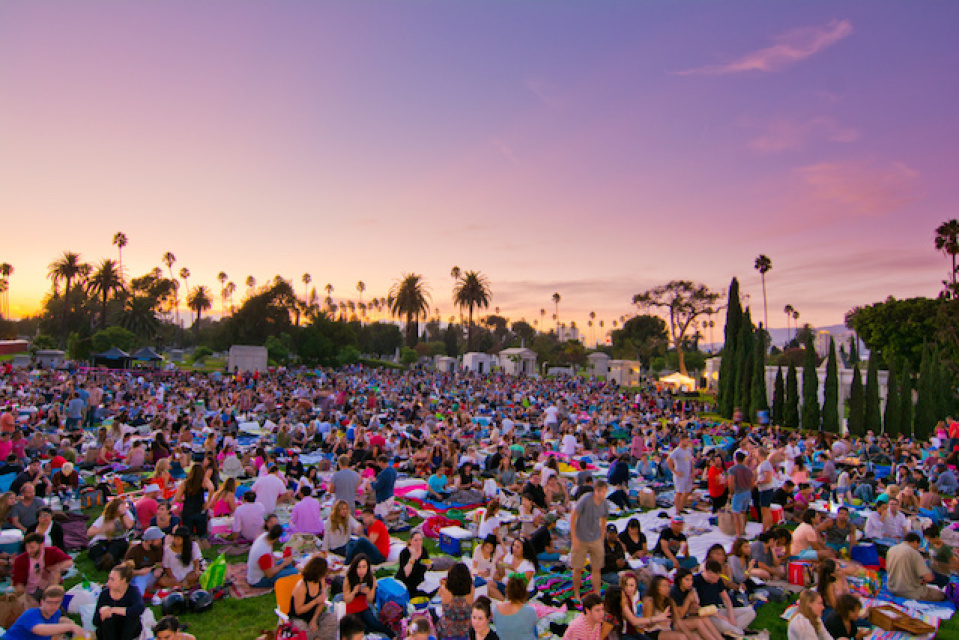 Fans get ready for a Cinespia screening at the Hollywood Forever Cemetery. (Kelly Lee Barrett/Cinespia)

Summertime in Los Angeles means beach days, ditching work early on Fridays (if you're lucky), wildfires — and Cinespia, which hosts outdoor movie screenings among the graves and crypts of the Hollywood Forever Cemetery.

Cinespia was created in 2002 by John Wyatt, who hoped to bring classic and cult films to people who've likely never seen them on the big screen. Over the last 16 years, the program has grown into an insanely popular event that brings thousands together on picnic blankets and low chairs every weekend from May to September.

The screenings almost didn't happen. The cemetery itself was in disrepair when Wyatt came in with his plan.

"They thought it was an odd idea when I first pitched it, but there was a movement with the Cemetery to not only restore the grounds, but also to bring some cultural events and life there. So they were a little skeptical, but they said, 'Let's try one,'" Wyatt told KPCC's The Frame.

The first movie screened there was Alfred Hitchcock's Strangers on a Train, shown to a couple hundred people.

"When the movie reached its end, everybody started cheering and screaming, and I thought, 'Wow, this really could be something.'"

Cinespia's screenings continued to expand, and now they include special events like the screening of the finale of Breaking Bad, along with screenings at theaters throughout the year.

L.A. summer screenings means they usually don't get rained out, though that did happen back in 2015 in the middle of July. But most of the time, it's a beautiful evening — as long as you're OK with feeling like you might be surrounded by ghosts, waiting to inhabit you.

To be fair, it's not like you're balancing wine bottles on headstones, even though the movies are being projected on the wall of a mausoleum.

"It's a beautiful location and a very old cemetery, over 100 years old, and in the center of it is a giant lawn called the Fairbanks Lawn," Wyatt said. "You come deep inside the cemetery to this beautiful open lawn, you have the Paramount backlot just over your shoulder, and it's really a unique place to see the films that all of these people made when they were alive."

Those buried at Hollywood Forever include legends like Peter Lorre, John Huston, and Cecil B. DeMille — along with below-the-line crew like costumers, hair people, grips.

The whole environment goes into giving fans who attend an experience.

"Especially these days, when you're so often watching film on a laptop by yourself, suddenly seeing them with thousands of people becomes a really different experience, and it's important — it's the way these films were meant to be seen, and on the big screen they become something totally different."

Wyatt says that he measures his success by how the crowd reacts, with people from all walks of life coming together to watch — just like all the walks of life below the ground.