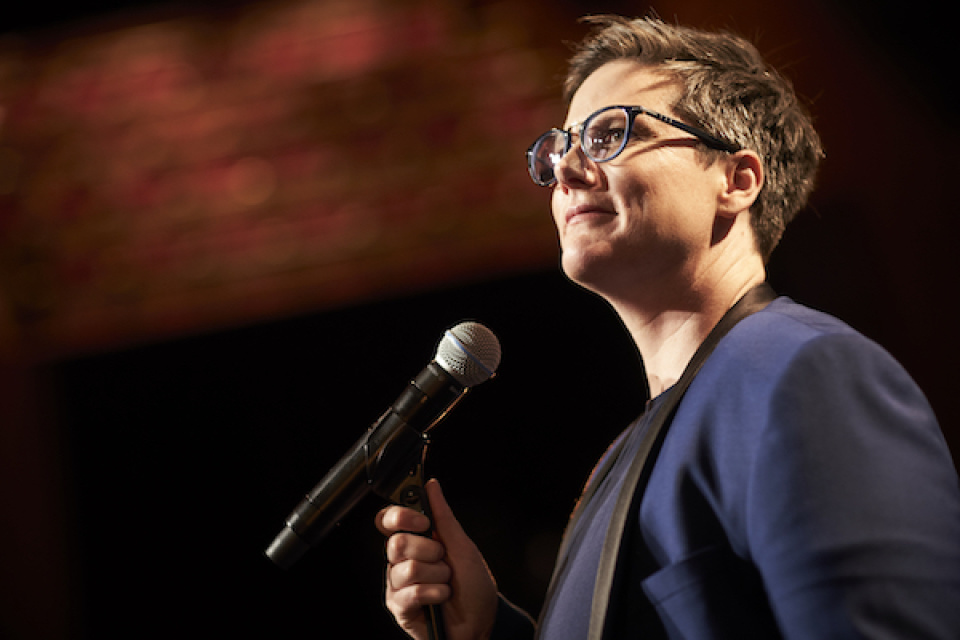 By Darby Maloney with Caitlin Plummer

Gay Australian comedian Hannah Gadsby should really quit comedy — at least, that's what she said when she took the stage at Largo, reiterating what she said in her new Netflix special Nanette.

Gadsby grew up on the island of Tasmania, swimming in self-loathing as the state went through years of heated debate around legalizing homosexuality, which had long been a crime.

When she started doing comedy, jokes about coming out and experiencing homophobia were the centerpiece of her routine. But in Nanette, she acknowledges that making jokes isn't the healthiest way to deal with the physical and sexual trauma she endured as well as her internalized homophobia.

"My whole story was always told around a joke diffusing but also laughing at homophobia, not acknowledging that it existed within me," Gadsby told KPCC's The Frame.

"You know, I often say that perhaps there should be a black stripe on the gay pride flag to acknowledge publicly the trauma that so many of us live through. You don't come out and instantly undo shame. You need the entire community that helped place that inside of you to also help undo that," Gadsby said.

So in the middle of her Netflix special, she says she's quitting: "I built a career out of self-deprecating humor and I'm not going to do that anymore — not to myself or anyone who identifies with me."

She was inspired by her personal issues, career frustrations and Donald Trump.

"A lot of complex ideas sort of met at the point of writing this show," Gadsby told The Frame. "I was in a very angry space because I was frustrated, not just because of the gay marriage debate, but then Donald Trump was elected, and unfortunately he's not just your president. I was struck by the very destructive way that our leaders tend to speak. I was making a documentary [for the Australian Broadcasting Company called Nakedy Nudes] at that time as well, about the nude in art — I studied art history — and I kept talking to these so-called 'good guys,' the left-wing-leaning men who work in the arts, who were just casually dismissing the brutality of a lot of their so-called 'geniuses.' And I was bit frustrated where my career was. I felt like I had plateaued. I saw the rise of perfectly fine young men, my peers, just getting all the opportunities. And I'm like, 'I don't mean to sound arrogant (in my own head), but I think I'm better than these fellas.'"

"It didn't matter how good I was at comedy, how good a joke I could work or how well I could control a room," Gadsby said.

Her answer to that problem: Announce that she's quitting then prove her skills with an amazing show.

"I make the claim I'm going to quit and I did that to subvert. You know, every time a woman does something like [sharing a very personal story] on stage, we're told we're not comedians. We do monologues or one-woman shows. And no man has shown his vulnerability on stage — no comedian — and been reduced to, 'Oh, he's just doing a bit of theater now.'"

In Nanette, Gadsby deconstructs what goes into a joke versus a story. It's her story that she wants to tell now.

"Stories can be told constructively in a way that appeals to the humanity of an individual. In order to really appeal to the humanity of those you don't share experience with, you need to tell it through a story. The only way that you stop people fearing your difference is to make yourself look just as human as they are."