Let's All Cry About How Nice Mr. Rogers Was In New Doc 'Won't You Be My Neighbor?' 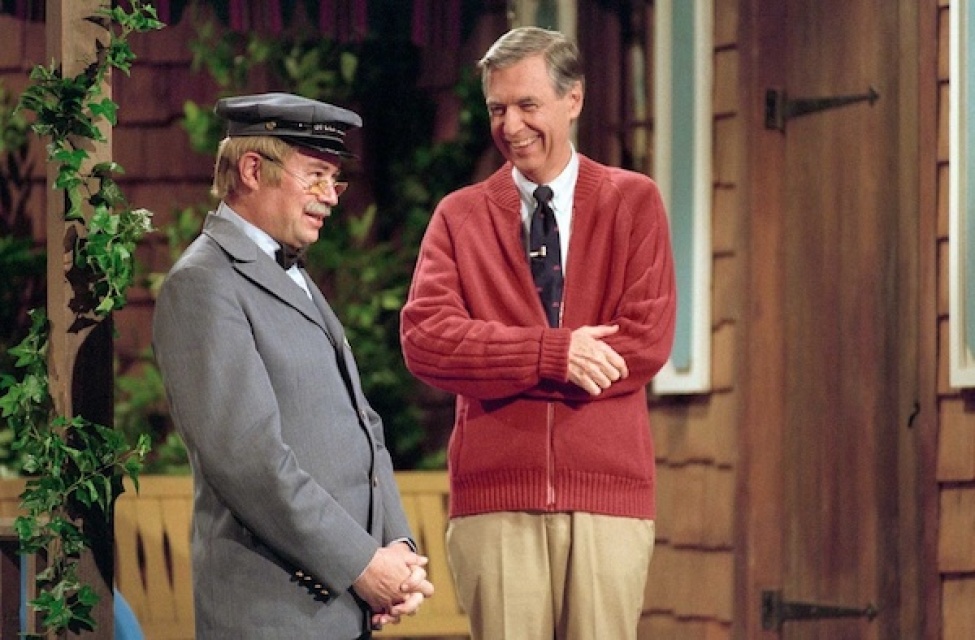 By Monica Bushman with Caitlin Plummer

In February 1968, Mister Rogers' Neighborhood made its national television debut, bringing its unassuming star and his neighborhood of friends into homes across the country.

By all accounts, there was really no expectation for why it became a wild success, but it ran for 31 seasons, airing new episodes until 2001 and inspiring a spin-off starring Daniel Striped Tiger, one of Fred Rogers' most famous characters.

Now, 50 years after Mister Rogers' Neighborhood first aired nationally on public TV, L.A.-based filmmaker Morgan Neville is diving into what made the show so successful with documentary Won't You Be My Neighbor?

As one of Mr. Rogers' producers puts it in the film: "If you take all of the elements that make good television and do the exact opposite, you have Mister Rogers' Neighborhood. Low production values, simple set, unlikely star. Yet it worked."

So what did make it work?

"I think it was because of him," Neville said. "Because of the trueness of his message and the way he was able to communicate with kids. He created this really unique vision that was not only ahead of its time and apart from its time, but is unique in history. I mean, people are still not doing the things he was doing on his show."

Won't You Be My Neighbor? opened in select theaters earlier this month, and it's a tearjerker. (Just watch the trailer below — but make sure to grab a box of tissues first.)

Neville talked with KPCC's The Frame about Won't You Be My Neighbor? (You can check out the full interview here or subscribe to The Frame on iTunes here.)

Neville says that the Mr. Rogers character is for real.

"There's actually this great book that he put out — a collection of letters he got and his responses to them — and it's one of my favorite things. He got more letters at one point than anybody in America, and he personally responded to every single letter.

"But the first letter in this book starts with, 'Are you for real?' And I think that's kind of essentially the question we all have, like, 'Is this guy for real? Can he really be this character? What is the difference between the man and the character?' And we're so used now to seeing this huge divide between our TV heroes and the people who play them. So I'm here to report that he's the same person. But not exactly the same."

The real Fred Rogers is an even better character than Mr. Rogers, because he's like what you want Mr. Rogers to be but with more dimensions, Neville said.

"In many ways, Fred Rogers, as opposed to Mr. Rogers, was this deep thinker. He was a Presbyterian minister. He had a graduate degree in childhood development. He was a seeker," Neville said. "He wanted to learn his whole life and he wanted to minister to people. He spoke many languages, he was a pacifist vegetarian."

Still, Mr. Rogers saw it as his duty to discuss serious issues on the show. He did it on topics from disability to Robert Kennedy's assassination.

That 1968 show "was a special episode that happened because Bobby Kennedy had been assassinated on a Wednesday night and the funeral was going to be broadcast on Saturday morning, nationally, and Mr. Rogers knew that children were going to be home and they were going to understand that something bad had happened," Neville said. "And so he said, 'I need to make a special' — which he threw together and it aired that Friday night, the night before the funeral — for parents to understand how to talk to their kids about what had happened."

He forced the network to give him the show, saying, "Well, this is exactly why I'm here." That special was what made Neville certain he had to make this documentary.

"And he did versions of that in the wake of numerous tragedies over decades, but he really felt like it was in those moments that he was at his best," Neville said. "When I was thinking about making this film and I went and I visited the archives, I had heard about this episode — which hadn't been seen in years — and I had them put it up for me. And I watched it, and at the end of watching that episode, I knew I had to make this film. It was just that clear to me that all the dimensions, everything I wanted to say, was embodied in that episode."

Mr. Rogers' own childhood in Latrobe, Pennsylvania had a big influence on the show.

"His family was wealthy and they owned a factory in the town, and in the wake of the Lindbergh kidnapping, his parents kept him kind of under latchkey," Neville said. "And on top of that, he had a number of illnesses and he was overweight, and so he kind of grew up by himself in his bedroom playing piano and playing with puppets. And he remained incredibly in touch with everything he thought and felt as a child, and so I think he went back to his own childhood again and again and again to figure out what kids needed to hear."

Daniel Tiger became the pure embodiment of who Fred Rogers was as a kid, and what his fears were.

"Daniel Striped Tiger was a tame tiger. He talked a lot about taming one's emotions, and I think Fred understood that children acted out not out of anger, but out of the underlying cause, which was fear. So I think Fred always tried to figure out what made kids fearful and how to help them understand those things in kind of age-appropriate ways."

The documentary is bringing audiences to tears — even just the trailer — and Neville said it even affects him.

"The film still gets me emotional. Even as we were finishing the film and watching it back, again and again, we kept getting emotional watching it. And I think part of it is that those of us who grew up with him had a connection with him that predates almost anything else in our life," Neville said. "You know, next to our family members, it's probably the oldest relationship we have. And there's something about spending time with him that asks us to revisit a part of ourselves we haven't visited in a very, very long time."

That part of us: our inner child, Neville said.

"There's something about the directness with which he speaks, he had that laser focus in his way of cutting through all the adult filters and shields and getting right to the core of what it is. And the experience, to me, of watching the film is finally you have to kind of succumb to his directness. You have to give in and say, 'OK, I'm willing to be as emotionally open as you are. I'm willing to be vulnerable.' Because Fred was incredibly vulnerable, always."

If you're ready to get vulnerable, Won't You Be My Neighbor? is in theaters now.