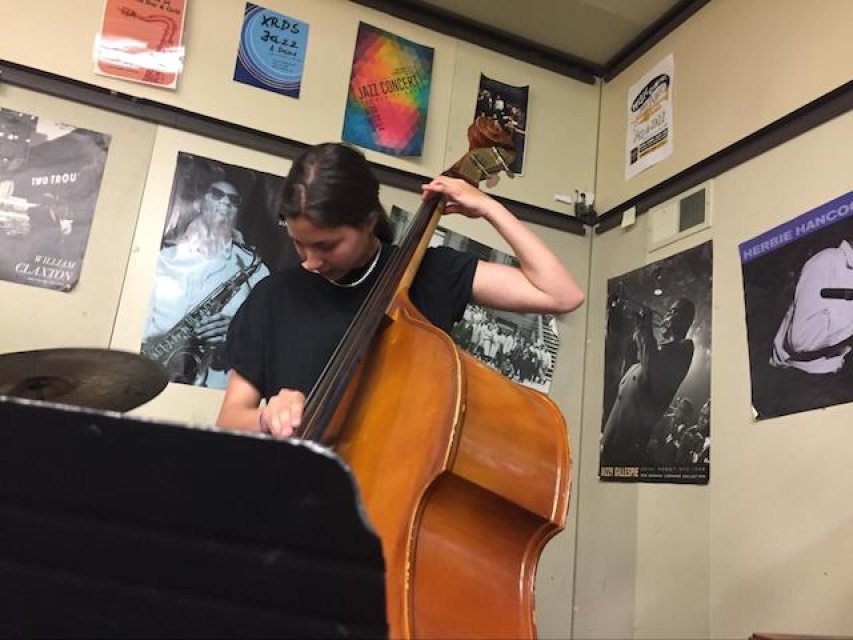 Abondolo is a recent graduate of Santa Monica's Crossroads School for Arts & Sciences. She was one of two bassists chosen for the prestigious program — as if she wasn't accomplished enough already before heading east.

Abondolo has a musical resume that spans pages (sorry, everyone who wants a one-page resume), and includes big names like the Monterey Next Gen All Ladies Combo, Stanford Jazz Combo, and the Berklee Jazz Workshop Combo. Last year, she was a Spotlight Awards grand prize finalist. Other artists who share that title: dancer Misty Copeland and Adam Lambert (yes, that Adam Lambert, of American Idol fame).

Today on @KPCC's @theframe: this Los Angeles teen is headed to @CarnegieHall

She's one of 22 students selected for the 1st ever NYO Jazz pic.twitter.com/F1ILNhPfns

She credits her musical talent and success to her parents, both professional musicians themselves.

"We sort of said, 'Well, you know, in this house, just like other people brush their teeth, you play piano,'" Josefina Vergara explained — she's Abondolo's mother and the Los Angeles Chamber Orchestra's second principal violinist, as well as a session musician for music, TV, and movies. "It's the foundation to learning how to read music."

After piano, Abondolo tried violin, then the cello. But when she got to eighth grade, there was a problem: there wasn't the option to take orchestra. So, she picked up a bass.

It wasn't easy. The two instruments are tuned differently, and jazz involves a lot more improvisation — but to everyone's surprise, she fell in love with jazz.

"I think I felt a bit more emotionally connected to improvising, playing the bass," she said.

Abondolo will get to grow and flex her skills alongside 21 of the country's best young jazz musicians at the NYO Jazz program this summer. She said she's looking forward to honing her skills improvising in jam sessions.

"It's just a huge venue, pretty historical," Abondolo said. "It's like a dream come true."

And if that wasn't enough, then they tour Europe, playing in venues like Cadogan Hall in London, the Edinburgh International Festival, and the Young Euro Classic Festival at the Konzerthaus in Berlin.

"If you're going to be doing jazz, you're going to be on the road a lot," Abondolo's mom told her. "I think it's gonna be ... a good experience for her to see what that entails and what it's like to move around from one city to another, and how you have to take care of yourself sometimes."

"Not only are you pursuing music at a really high level, but you're also living alone for five weeks," Abondolo added. "It's going to be nice to just kind of gain more independence."

She also looks forward to honing her skills in improvisation.

"Sometimes, you don't know the tunes. You're kind of learning on the fly," she said. "So I think just a lot of these jam sessions experiences really help me, and I think it's gonna prepare me for college, and what's to come."

Abondolo got the gig by submitting videos of her performing along with a video essay.

"The prompt I chose was just like a musician who inspires you, so I started talking about one of my favorite musicians, and someone I've looked up to — her name is Esperanza Spalding."

Abondolo admires Spalding's musicianship and control of a band, but they have something else in common: they're both female musicians in a male-dominated jazz world.

"I've usually been the only girl in many ensembles," Abondolo noted, though she said she thinks that's starting to change. "In terms of jazz education, there's a lot more emphasis on trying to get girls into jazz at an early age."

At the New England Conservatory of Music in Boston — where Abondolo is headed will start college in the fall — jazz studies department chair Ken Schaphorst said in a statement emailed to KPCC that the department has more than double the female students it did two decades ago.

Abondolo says she eventually wants to be a bandleader and perform her own compositions. But before that, she and the young musicians of NYO Jazz have this summer to look forward to. They play Carnegie Hall on July 27.