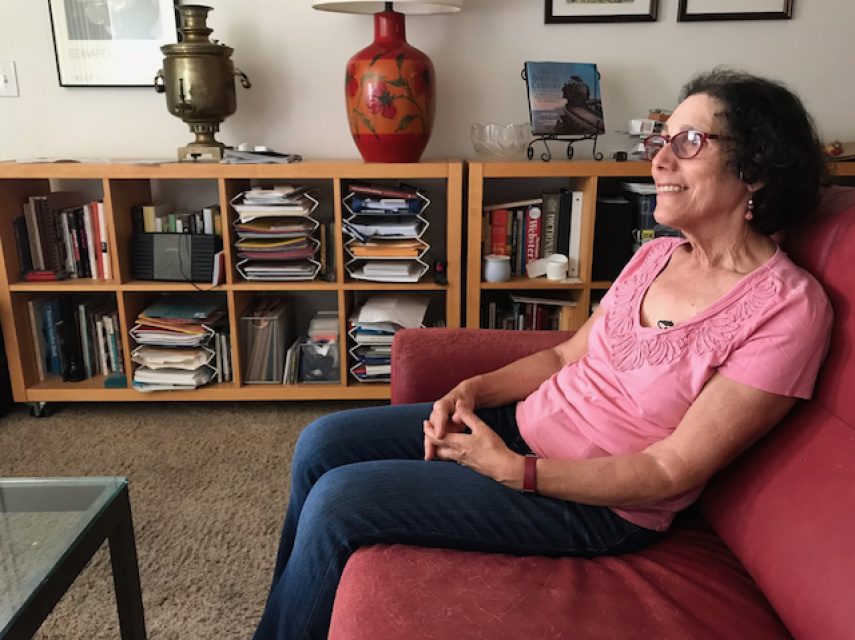 Retiree Rosanne Goodwin receives $2,060 a month in Social Security benefits each month but it's about $400 less than her expenses, June 1, 2018. (Photo by Amita Sharma/KPBS)

Each month, Rosanne Goodwin scours her one-bedroom apartment outside San Diego for possessions to sell on eBay.

"I've sold photo albums," Goodwin said. "I've sold whatever I could that's just around the house, hand tools that I've had since I was in my 20s that my dad had given me for being out on my own. I just look around and wonder what can I sell now that will generate some income?"

California has one of the highest percentages of seniors living in poverty in the United States, behind only Washington DC, according to the Kaiser Family Foundation.

One in five seniors in California live in poverty, after adjusting for spending on basic necessities.

"Women are twice as likely to age in poverty than men ... They were likely to spend time away from the workforce and at home doing the caregiving but not being rewarded financially for that." — executive director for Justice In Aging

And the UC Berkeley Labor Center predicts half of Californians currently working are on track to retire with individual incomes of about $24,000 a year, twice the federal poverty figure.

The California Dream of retirement — having enough money to enjoy a carefree life after decades of work — hasn't lived up to its promise for Goodwin.

Goodwin receives $2,060 in Social Security benefits each month, a sum that includes disability for the rare form of brain cancer she was diagnosed with a few years ago. But her monthly expenses total $2,400 a month.

"It's heartbreaking," said Kevin Prindiville, executive director for Justice In Aging, a national advocacy group for seniors. "Seniors are the people who cared for us. They're the people who built our communities, who taught our kids, who worked in our hospitals. They really built our cities and our state and now to see them struggling so much just to put food on the table or to have housing, it's brutal."

According to Prindiville, wage stagnation, high housing and health care costs and a decrease in company pensions have made it harder for people to save for retirement.

The struggle often means reliance on the goodwill of others.

Each month, Goodwin receives a $200 check from friends to help cover her living expenses. Other friends give her grocery store gift cards and treat her to meals.

"Who I am now, I accept it with such gratitude; but who I was five or 10 years ago, I could have never asked or taken," Goodwin said.

Goodwin earned a bachelor's degree in history from UC Berkeley and a master's degree in museum studies. She worked for 35 years as a sales rep. She said she placed 10 percent of her earnings into a retirement account. But layoffs and health problems depleted her savings.

Even though she's stitched a way to stay afloat through selling possessions, growing food in a garden and accepting the generosity of friends, she said she's been thrown another wrench. Her rent is about to go up 50 percent on her one bedroom apartment.

With few options for affordable housing for seniors, she said she's at her most vulnerable point.

"It is to me deplorable that we're considered disposable," Goodwin said.

Analysis by the California Budget & Policy Center shows the median percentage of household income spent on housing by seniors was 24 percent in 2016. For senior homeowners, it was 19.5 percent. For elderly renters it was 37 percent.

The federal government recommends that people spend no more than 30 percent of their income on rent or a mortgage.

What is different about today's seniors in California is that they did "all the right things," said Prindiville of Justice In Aging.

"They worked," he said. "They were in a relationship. But then something went wrong, a divorce, a death of a spouse, a lost job, a problem with a housing situation."

Conditions are more dire for women.

"Women are twice as likely to age in poverty than men," Prindiville said. "They were likely to spend time away from the workforce and at home doing the caregiving but not being rewarded financially for that."

In 2016, 4.4 million senior women were impoverished in the United States, compared to 2.8 million men, according to the Kaiser Family Foundation.

Overall, more seniors are working well into their retirement.

"California senior employment is at all time high," said Nari Rhee, who is director of the Retirement Security Program at the UC Berkeley Labor Center.

Twenty-six percent of people in the state, between the ages of 65 and 74, work. Nineteen percent of seniors older than 75 hold a job.

"I work all the time, said Marigold Hernly, a San Diego Realtor who turns 70 next month. "I would really love to be retired. I know what I'd do. I'd have people over for dinner everyday, work in my garden, raise my roses and tomatoes."

But if she didn't sell homes, she says her retirement savings and Social Security aren't enough to pay the bills.

"Every month, the water bill and the gas and the electric goes up and up and up," she said.

Hernly earned a bachelor's degree from San Diego State University. She says she has worked her whole adulthood and can't believe that she still has to worry about whether she will have enough to support herself at this point in her life.

In 2019, the state will launch the CalSavers program which creates retirement savings accounts for people who work for employers who don't offer them.

Lawmakers are also discussing whether to allow more seniors to access food stamps, make it easier to qualify for Medi-Cal and extend coverage to older immigrant adults.

"It's the first movement we've seen in some time for policymakers to address this issue of senior poverty," said Prindiville. "There's much more that can be done and needs to be done."

Pressure on policymakers to do more for seniors is only going to intensify.

"As we see this large wave of baby boomers that don't have enough retirement savings move out of their working years, policymakers are going to have to think about their needs," said Erik Bruvold, chief executive officer at the San Diego North Economic Development Council. "They're going to be housing challenged. They're going to be medical care challenged. It's going to be a significant burden on taxpayers and the state."

Goodwin plans to start looking for another apartment soon. But she said doctors just found a new cancerous tumor in her brain which means surgery is likely to delay her search.

"I worry that the longer I wait, the more difficult it will be to find a place that I can afford."

Want to talk about this story? Visit the #CADream Facebook group page.

The California Dream series is a statewide media collaboration of CALmatters, KPBS, KPCC, KQED and Capital Public Radio with support from the Corporation for Public Broadcasting and the James Irvine Foundation.