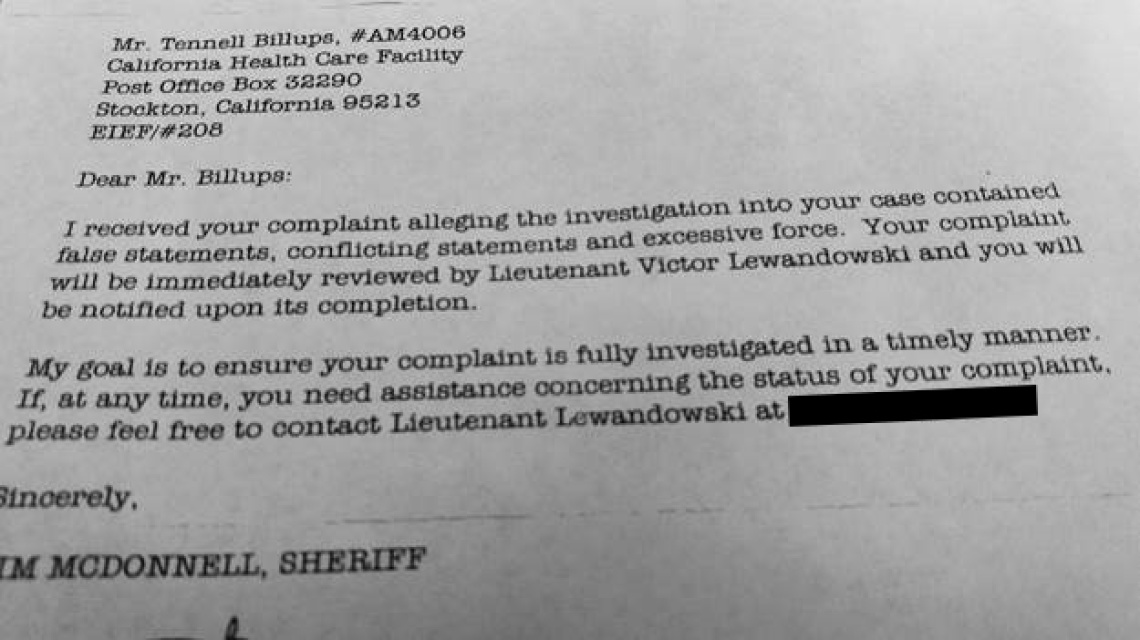 A May 23, 2018 letter addressed to Tennell Billups explained that his complaint would be "fully investigated."

It began as an investigation into the actions of two men: a burglar named Tennell Billups and the Los Angeles County Sheriff's deputy who shot and wounded him. The two men had different versions of what went down. One ended up pleading guilty and incarcerated.

Now the sheriff's department is reviewing Billups' claims of "false statements, conflicting statements and excessive force," according to a May 23 letter addressed to Billups and signed by Sheriff Jim McDonnell.

The move comes after our investigation into Billups' shooting released earlier this year as the podcast "Repeat."

Billups is a convicted criminal: He'd been burglarizing a house in Florence Firestone in April 2011 when deputies were called to the scene. According to department records, Deputy Gonzalo Inzunza told investigators Billups pointed a gun at him, causing the officer to fear for his safety and the safety of his partner, who stood nearby.

"At that point I shot," Inzunza testified later in court, "three to five times, I believe, at the defendant to stop the threat." Inzunza did not return requests for comment for this story and declined to speak for the podcast.

Then a different version of events emerged. The day after speaking to Inzunza, Sheriff's investigators interviewed Billups while he was recovering from his wounds in the hospital.

Billups told the investigators a story about his car breaking down and being chased by gang members, according to department records. He told us it was a lie, a bid to avoid the burglary charge.

According to sheriff's records, Billups also told investigators he didn't have a gun, which he later argued in court and maintains to this day.

Our review of hundreds of pages of records from the sheriff's investigation, Los Angeles District Attorney's Office and the resulting court case raised a number of questions, including: Why did Inzunza's partner not see a gun in Billups's hand?

Inzunza said Billups tossed the weapon, and fearing the suspect could rearm himself, Inzunza grabbed the gun and put it in his own pocket. His partner told investigators he saw Inzunza pick up a gun. According to sheriff's records, testing found no DNA evidence on the gun to connect it to Billups and showed the gun didn't work - it couldn't fire.

"This is a throwaway gun," Billups told us. "[Inzunza] was already under investigation for some previous stuff."

Inzunza had other incidents that came under department investigation: Our investigation of district attorney records found Inzunza shot at four people in seven months. Most officers go their entire career without shooting anyone.

In the Billups shooting, it's unclear from publicly available records whether sheriff's investigators sought to follow up on Billups' claim he was unarmed.

The district attorney's office ultimately charged Billups, presented Inzunza's statements as the facts and declined to charge the officer. Billups said the charges were trumped up, making him look like the dangerous one.

Billups faced possible life behind bars and decided to take a deal offering a lesser sentence in exchange for guilty pleas to the burglary and other crimes.

The judge asked Billups if he also admitted to using a firearm. Billups replied "Yes."

The new sheriff's investigation, which offers a lieutenant in the homicide bureau as a point of contact, could shed new light on the shooting. According to the sheriff's procedures for public complaints, department officials can talk to people involved and potentially gather new information.

This marks the second probe since we released "Repeat" in February. Earlier this year, Inspector General Max Huntsman, the sheriff's department's watchdog, ordered a review of events described in podcast.

The two reviews differ in reach. The sheriff's investigation could yield new information in the Billups shooting, whereas the Inspector General's probe is centered on scrutinizing systemic issues in all LASD shooting investigations, as well as investigating the issues our reporting raised about deputies with multiple shootings.

Investigative journalism matters. Here at LAist, we believe Angenelos deserve hard-hitting reporting that holds officials accountable and shines a needed light on our government and public institutions. Now that we're part of KPCC, those stories are made possible by generous people like you. Independent, local journalism isn't cheap, but with your support we can keep delivering it. Donate now.