This weekend, you can celebrate some of the longest days of the year in the Southern California sun — from Arroyo Seco Weekend in Pasadena and CicLAvia in the Valley to a mass meditation in an open field and a massive bounce house. For those who prefer the nighttime, Drunken Devil holds an immersive "Sin-a-Rama" party and there's samba dancing under the stars. 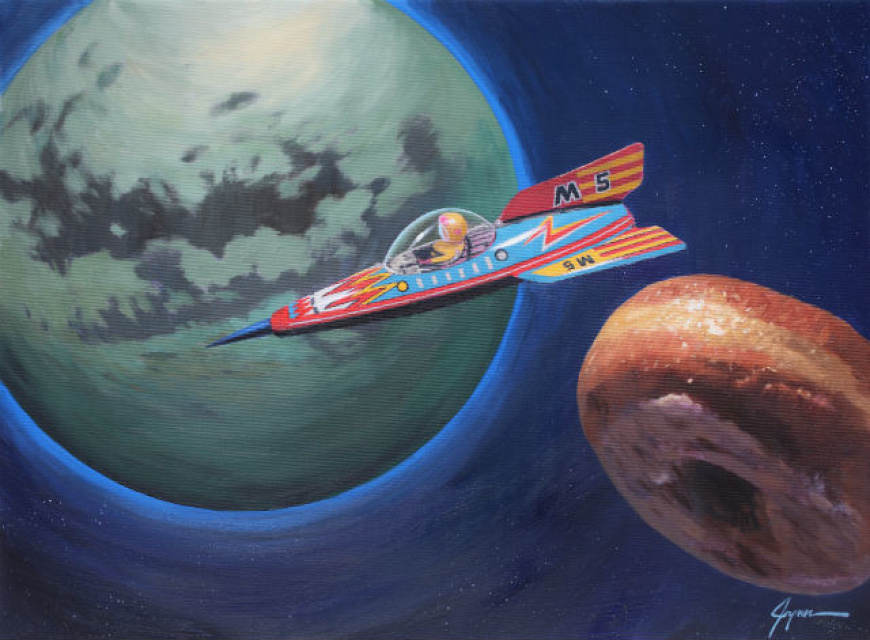 Corey Helford Gallery opens a number of exhibitions this weekend, including a solo show by "Glazed Machinations." ERIC JOYNER

The gallery holds an opening reception for a new body of work from its longest featured artist. The exhibition is a love letter to California by melding images of coastal landscapes, cities with his signature vintage robots and donuts. The gallery also opens "It's Not Glitter, It's Stardust" with works by CANTSTOPGOODBOY and a group exhibition assembled by Waxploitation Records, featuring art from the book Waxploitation Stories For Ways & Means.
COST: FREE; MORE INFO

We've heard about the music — with headliners Neil Young, Jack White, Kings Of Leon and Robert Plant — and the food. But did you know that this is a family-centric festival where children ages 10 and younger get in free? Pasadena's Kidspace Museum runs a tentful of activities for the young ones, from a make-your-own box guitar to an interactive drum circle and tons of arts and crafts. The Huntington Library and NASA's Jet Propulsion Laboratory are hosting installations while Vroman's Bookstore curates Little Libraries throughout the fest.
COST: $149-$999; MORE INFO

The community space, focused on pet adoptions, educational programming and the science between the animal-human bond, celebrates its first anniversary with an open house. Play with adoptable pets, take behind-the-scenes tours, eat at free food trucks, get your face painted and snap your picture in a photo booth. Well-behaved dogs are invited to attend; one visiting pet per family.
COST: FREE; MORE INFO

Horror-themed production and event company Drunken Devil will try to transport guests back to the 1970s, in the middle of a grindhouse movie. Actors playing sleazy film stars will mix with the crowd as they bring a "terror-tinged narrative" to life. Listen to live music by Dave Cavalier Trio and watch burlesque performers Olivia Bellafontaine, Jessabelle Thunder, Brynn Route, Kristina Nekyia and Miss Ashley Hayward. Guests can indulge in a concessions stand with movie theater popcorn, candy and a hosted bar.
COST:$80; MORE INFO

Most pilot scripts end up in the circular file, even if the ones penned by established writers. For a little ego boost, listen to live reads of rejected scripts by Jenji Kohan ("Orange Is the New Black"), Patrick Schumacker and Justin Halpern (Harley Quinn; $#*! My Dad Says) and Caroline Williams ("Arrested Development"). They'll be read by actors Justin Kirk, Nicole Byer, Phil Lamarr, John Gemberling and Carrie Wampler.
COST: Tickets start at $15; MORE INFO

The healing arts and vegan festival features yoga, music, guest speakers, art installations, a sound healing dome, a children's space and a global group meditation at 2 p.m. via a live stream. At 8:30 p.m., there's a screening of "Above Majestic," an examination of a secret space program and "origins of technologies, history, coverups, conspiracies, testimony and research that goes beyond!"
COST: Free; MORE INFO 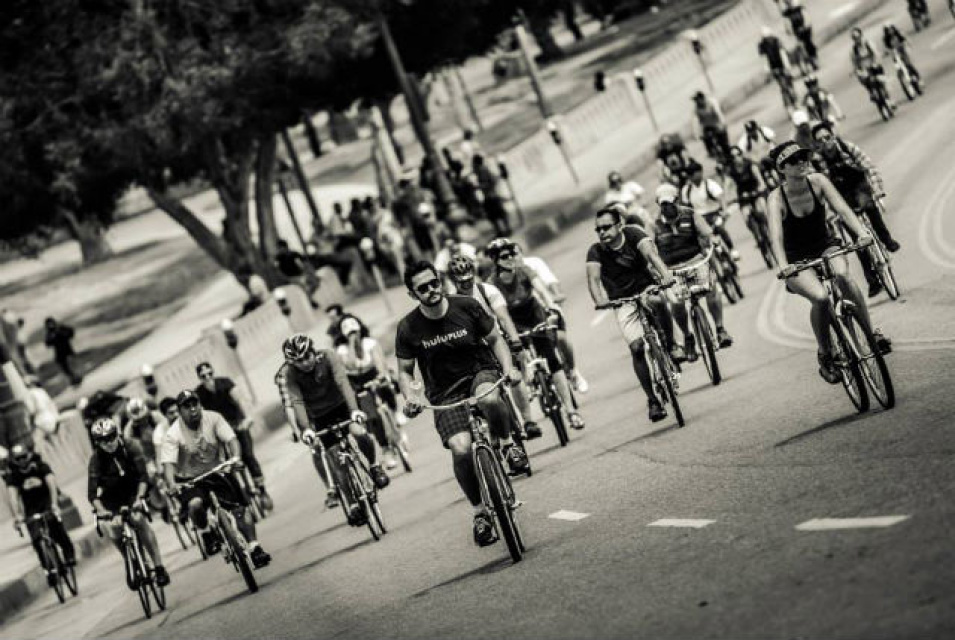 Ditch the car for a day and explore what Van Nuys Boulevard has to offer. Walk, ride, skate or hop on a free pedicab. Check out activities at each of the three hubs along the four-mile route, from games and bike safety to basic skateboarding workshops and performances by the Street Poets.
COST: FREE; MORE INFO

The composer and bassist takes on the jazz masters with a little help from Miguel Atwood-Ferguson, Jamael Dean, Dale Fielder and Thomas White.
COST: $20; MORE INFO

Hallelujah! Ron Athey: A Story of Deliverance (1997) [Trailer] from Aubin Pictures on Vimeo.

Artist, producer and LGBTQ activist Zackary Drucker will screen Catherine Gund's 1997 documentary of performance artist Ron Athey as part of the Outfest UCLA Legacy Project. Athey's incorporates aspects of S&M and this film is NOT for the squeamish. Drucker, Athey and Gund will be on hand to discuss the film and Athey's work.
COST: $8-$10; MORE INFO

It's a Ron Athey double-header. He teams with Nacho Nava to create an epic night of music and performance art with a cast of international artists. The event includes the L.A. premiere of sword swallower Missa Blue's "Black Madonna" performance. Other artists throughout the night include Little Annie, San Cha, Arshia Fatima Haq and Austyn Rich.
COST: $20; MORE INFO

The zoo pairs local bands and breweries for its summer series. This weekend, Full Spectrum plays tunes from the '60s and '70's with Stereo Brewing, Stone and Tustin Brewing Company serving the hops. Guests can explore the zoo after-hours, buy tickets to ride the Zoofari Express Train, the new 50 Monkey Ferris Wheel and the Conservation Carrousel.
COST: $19.95 (zoo admission) and $15 for optional beer garden for those 21+; MORE INFO 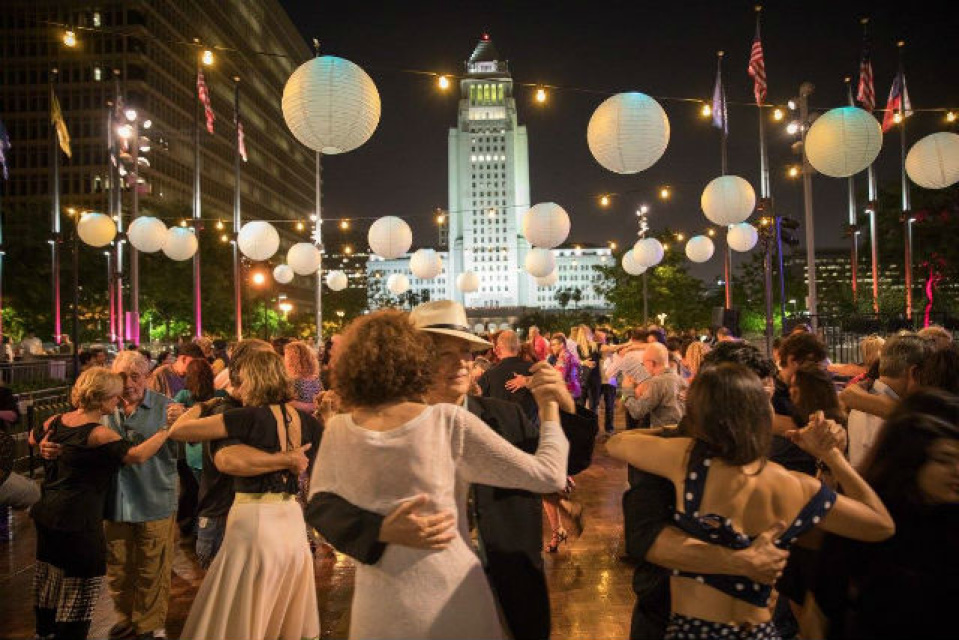 Last August, guests danced to the tango under the stars. This week, it's the samba at Dance DTLA in Grand Park. MUSIC CENTER FACEBOOK

Dance under the stars with free beginner samba dance lessons or freestyle it, all to the tunes of drum ensemble Samba Da Mudança. Pack a picnic or buy food and drinks on site. Cocktails are available for those 21+ with valid ID.
COST: FREE; MORE INFO

The young Canadian quartet plays an all-ages show in support of "Scout," its first EP. Finn Wolfhard (Mike Wheeler from "Stranger Things") is the band's most recognizable member, singing and playing rhythm guitar. Rounding out the group are Malcolm Craig on drums, Ayla Tesler-Mabe on vocals and lead guitar and Jack Anderson on bass.
COST: $26.50; MORE INFO

Take a private, guided excursion through L.A. history at the elaborately decked out restaurant, then stick around to pick up a signed copy of the book and chat with authors Danny Jensen and Carrie Kim.
COST: $10; MORE INFO 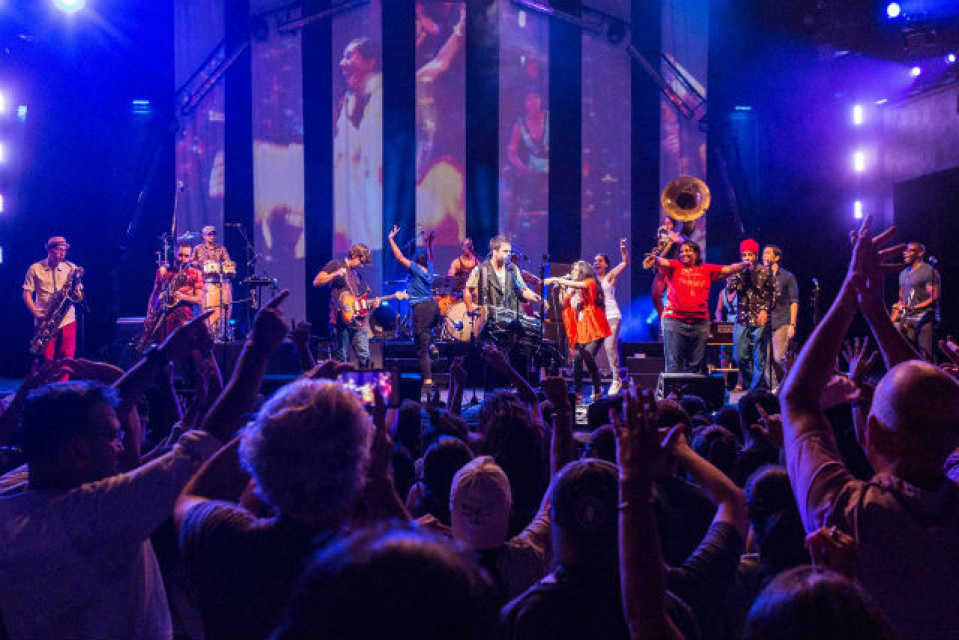 The Brooklyn-based sextet explores South Asian culture through music, mixing Bhangra with jazz, hip-hop and psych. The band is currently on tour in advance of its upcoming release, "Sound The People," which is due out June 29. The Higgs opens.
COST: $16; MORE INFO

The festival returns for its 32nd edition — but in a new location. Listen to musicians play blues, Cajun and zydeco then dance off the beignets in the French Quarter marketplace. Or don't sweat the calories and sign up for the popular crawfish and watermelon eating contests. The ticket price includes admission and entertainment, but the gumbo, crawfish etouffee, jambalaya, hush puppies, beignets and other victuals are all sold à la carte.
COST: $25 - $35, free for children 12 and younger, active military and veterans; MORE INFO

Here's a great way to de-stress this weekend: Hop into the world's largest bounce house. We're talking 10,000 square feet of inflatable fun. There are plenty of play zones and activities in the house — basketball hoops to a ball pit and dozens of inflatable toys. A DJ keeps things moving with age-appropriate party music. There are split, hour-long sessions by age throughout the weekend because... safety first.
COST: $13 - $21 (each person needs a ticket); MORE INFO

How are you spending your weekend? Let us know on Twitter @christineziemba and @LeoHasACat.