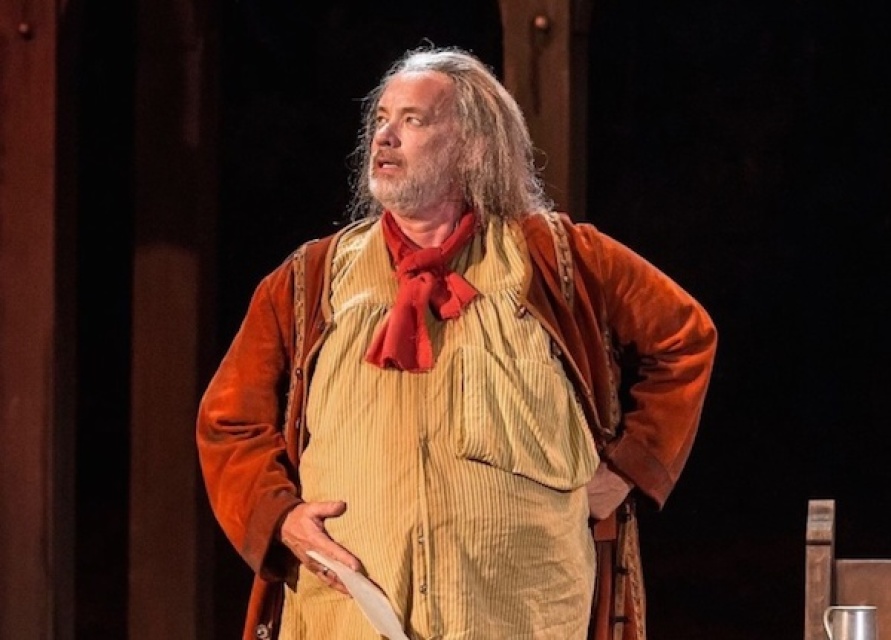 Tom Hanks is Falstaff in the Shakespeare Center of Los Angeles production of Henry IV. (Photo by Craig Schwartz)

American treasure/our favorite Bosom Buddy Tom Hanks is making his L.A. stage debut this summer with Henry IV, a Shakespeare Center of Los Angeles production running through July 1. Despite the Shakespeare Center's long history working in Downtown L.A., Hanks and his co-stars are performing in an outdoor amphitheater in the Japanese Garden of the West L.A. Veterans Affairs campus.

John Horn from KPCC's The Frame sat down with Hanks in the Japanese Garden a few hours before showtime. Hanks stars as Sir John Falstaff, a disreputable and comedic thief — who basically seems like a Shakespearean life of the party. The play has been condensed to follow the roguish Falstaff and his protégé Prince Hal (played by Hamish Linklater of The Big Short) as they navigate exploits throughout Parts 1 and 2.

Hanks said he wasn't steeped in Shakespeare going into this rare stage appearance.

"Quite frankly, I didn't know that much. I knew of Falstaff, but outside of a few pretend references of being familiar with [Orson Welles's film about Falstaff] Chimes at Midnight and always pretending you know all the Shakespeare histories, the great discovery that I went through on all of this was to discover that immediacy that he has," Hanks said.

"Other characters [are] out for something. He's out to avenge the death of his father. Richard III is out to become King. Iago is out to square the great injustice of only being an underling to Othello," Hanks said. "Falstaff wants to have a good time. He wants to wake up in the morning and figure out, 'How am I going to maximize a good time today?' And he does it throughout the entire play, and he does it in ways that are irrefutably brilliant."

The stage was built by veterans, who are also helping behind the scenes and running props during the show. Hanks has been working closely with the vets making up the crew.

"I've talked to guys who had never even been to the theater before, much less worked on one," Hanks said. "The exposure that we can give to these guys, number one, it's just something for them to do. A lot of them just need that. But then, they also hopefully can transfer some of the esprit de corps that can come along with the reasons that we're in an acting company in the first place.

"Ray Porter, who plays the Douglas, was explaining to a veteran about the pulsating excitement that will come as you hear the murmur of the crowd in the stands, and you know there's 10 minutes before places, and five minutes before — he was describing the excitement of the starting of a play to a guy who has been in combat before. So he felt like an absolute idiot for a moment, but the guy that he was talking to said, 'Oh no, I, yeah, I get that.' And to give them exposure to this, it just ends up being magical.

"The other aspect of it too is that we get to come here and use this [space], use the trees and the hills and the night and the light. And the caveat is, 'Well you've got to have a lot veterans involved on it as well. Otherwise you don't get to.' Which is... [great] - we win! Great, bring 'em on! That's only going to add to the experience."

Shakespeare Center founder Ben Donenberg said this is the best venue in L.A. County he's found for a performance of Shakespeare. "We've been everywhere, and this place is hands-down [the most] intimate, supportive, and beautiful. You can hear every word," he said. "We have 600 people here and no one is more than 10 rows away. You're like in your living room."

Hanks said there's something different that he gets out of acting on stage instead of in film or on television.

That doesn't mean that Hanks's Falstaff: The Motion Picture is coming to theaters anytime soon.

"Look, I never would ever see myself as Falstaff in a movie because, well, how much of a suit and makeup can you take? At the end of the day, you know that it's fake," Hanks said. "Here, you know that it's fake, but that's part of the bargain in the first place. You know you're sitting in a Japanese Garden, not in a movie theater. You know you're outside instead of being indoors. You know that the acoustics are different. And we begin the show still in daylight, and it's the longest cross fade to darkness that you could ever possibly imagine because it's God's own light under God's own trees."

The show also stars Harry Groener as Northumberland, Joe Morton as Henry IV and Rondi Reed as Mistress Quickly. (You can check out the full interview here, and subscribe The Frame on iTunes here.)