Backlash Is Brewing In Inglewood Over Proposed Stadium For LA Clippers 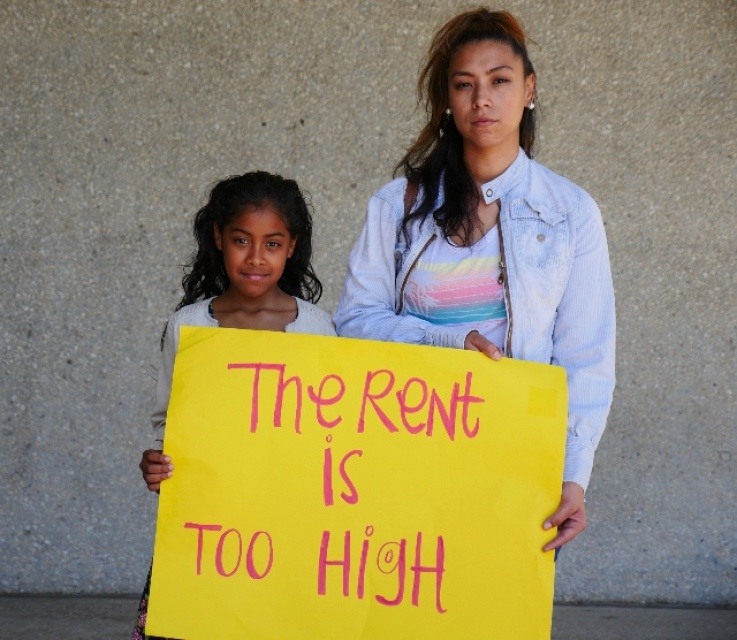 Sara Santos with her 9-year-old daughter, Gianna, says she's struggling to stay in Inglewood because of rising rents. (Photo courtesy of Joshua Busch)

Housing activists in Inglewood are suing the city, claiming that officials are putting construction of the proposed L.A. Clippers stadium ahead of residents' housing needs.

Local politicians, including Mayor James Butts, are supporting the NBA team's bid to fast-track construction of an arena on public property. But the group Uplift Inglewood argues in a suit filed Tuesday in Los Angeles Superior Court, that the city is failing its residents by not prioritizing the land for subsidized housing.

The group alleges that the city broke state law for failing to notify other government agencies and interested private developers that the land could be available for affordable housing development. It's asking a judge to invalidate the city's current negotiating agreement with the Clippers so it can follow the state's Surplus Land Act.

"The theory is there could be housing there," said Antonio Hicks of Public Counsel, which is representing Uplift Inglewood, along with the Public Interest Law Project and Cozen O'Connor.

City officials did not return calls or emails for comment on Tuesday.

The suit also calls out the city for failing to meet its state-mandated housing goals. Note: That puts it in the same boat as most California municipalities.

Hicks said that Inglewood residents need greater protection from displacement and real estate speculation that's intensifying as big-profile projects head to the city like the $4 billion L.A. Rams stadium slated for completion in 2020.

"We're not out here freeloading. Now they're giving a home to a billionaire before they take care of the residents."

Sara Santos said she lives in Inglewood so she can bartend nearby at LAX and have time to raise her nine-year-old daughter. But she wonders how long she can stay. Her rent's gone up by nearly $300 in less than two years. Her $1,500-a-month-rent now eats up more than half of her paycheck.

"We pay taxes too," Santos said. "We're not out here freeloading. Now they're giving a home to a billionaire before they take care of the residents."

That billionaire would be Clippers owner Steve Ballmer who's been lobbying for AB 987, which would speed up approval of a new arena despite challenges brought under the state's environmental law.

In addition to the lawsuit, Uplift Inglewood is behind a campaign to get a rent control ordinance before city voters in November. One of its organizers D'Artagnan Scorza said that the group has submitted 14,000 signatures. It needs the signatures of more than 9,500 registered voters to qualify for the ballot.