The Long Beach Post Has A New Owner, And A New Mission 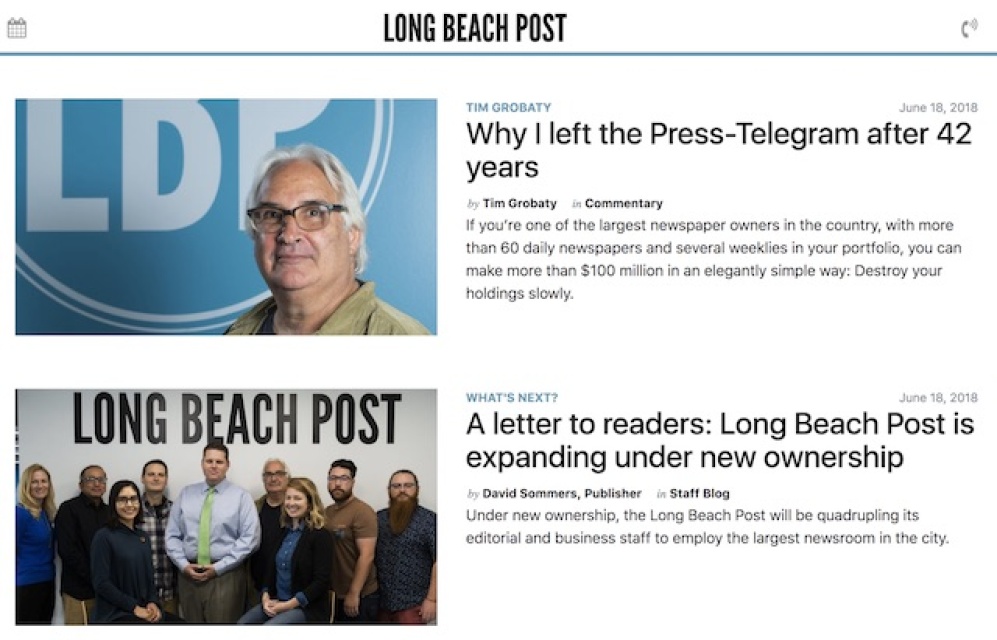 The local news scene in Los Angeles is on fire this week.

LAist returned to life, half a year after it was unceremoniously shut down by its previous owner.

The L.A. Times is back under local control after billionaire health care entrepreneur Dr. Patrick Soon-Shiong closed his deal to buy the paper (and the San Diego Union Tribune).

And a slightly smaller local rag, the Long Beach Post, has a new owner and a renewed focus on hard-hitting, hyperlocal coverage.

"The mission is to cover Long Beach," he told KPCC's Take Two. "It's my city and it's been ignored too much."

Grobaty isn't the only one who feels that way. Investment group Pacific6, backed by former Molina Healthcare CEO John Molina, bought the Long Beach Post, and Grobaty said it's Molina who's pushing the local focus.

With nearly 500,000 residents, Long Beach is the seventh most populous city in California — and Grobaty said it needs its own paper.

Long Beach "has that whole 'shadow of L.A.' thing going for it. It needs to be paid attention to. Too much stuff has slipped through the cracks over the years because we didn't have the resources to cover it," he said. "We are getting there now."

Reporters will cover local politics, Long Beach's City Council, sports, food and decaying tourist attraction The Queen Mary, which Grobaty says is soaking up a ton of money in repairs.

"We are all very excited," Grobaty said. "It's the biggest news organization I've worked for since the Press-Telegram started dwindling. We have about 15 people and more are coming."

News happens every day. Here at LAist, our goal is to cover the stories that matter to you and the community you live in. Now that we’re part of KPCC, those stories (including this one you’re on right now!) are made possible by generous people like you. Independent, local journalism isn't cheap, but with your support we can keep delivering it. Donate now.