This Woman's Been Covering LA In Epic Balloon Creations 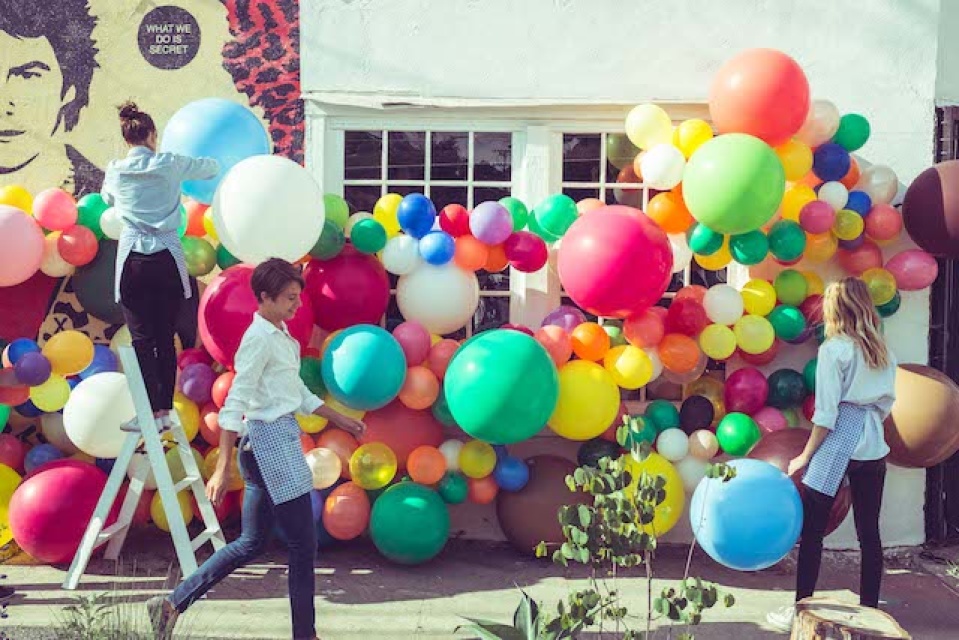 If you live in Los Angeles, you might not have heard of Geronimo Balloons, but you probably recognize their work — like the thousands of multicolored balloons that once covered the Hollywood Sunset Free Clinic in Silver Lake, or that colorful sprouting on the side of the Broad.

Geronimo has its eyes on world domination — or at least balloon domination — venturing outside of town, covering a market in San Francisco and recently taking over the New York City Ballet.

"This fall we did [Grand] Central Market in Downtown," Geronimo Balloons founder Jihan Zencirli said. That required 40,000 balloons. "I've created pieces all over, like secret pieces that you might not even know about that haven't been on Instagram." 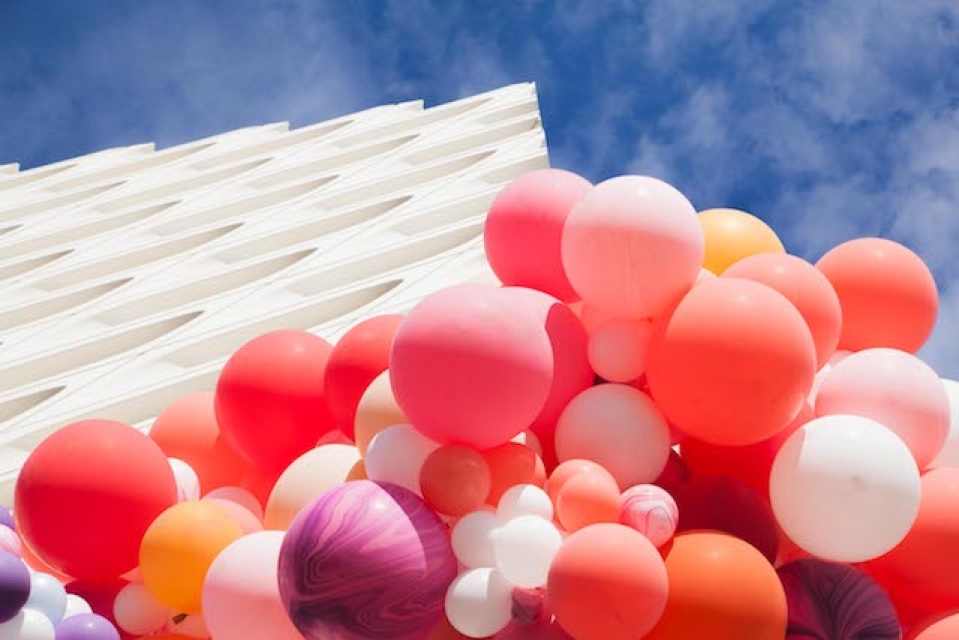 Some of it is commissioned — and some of it is guerrilla-style street art, the team going to a building at the crack of dawn, scaling it with ladders and working for maybe 10 hours — blowing up balloons and arranging them into fantastical formations. Formations that have shown up on the Geronimo Balloons Instagram, along with the Instagrams of Kim Kardashian, the singer Sia, and actress Sarah Jessica Parker.

It started in early 2011, when Zencirli showed up in L.A. inside a U-Haul truck.

"I was 25, I was divorced and I was taking care of my grandmother and she died, and then I thought, 'I think is my chance to just go have kind of a brave moment,'" Zencirli said; she was moving from Seattle. "I moved to L.A. with just this intuition that this would be a creative place for me."

(You can listen to The Frame's full story here.)

Back in Seattle, balloons were a hobby — the first creation sparked by a friend's birthday. She grabbed some balloons she bought on Etsy, making tassels out of old wrapping paper and satin ribbons from Japan.

"No one had seen it before." 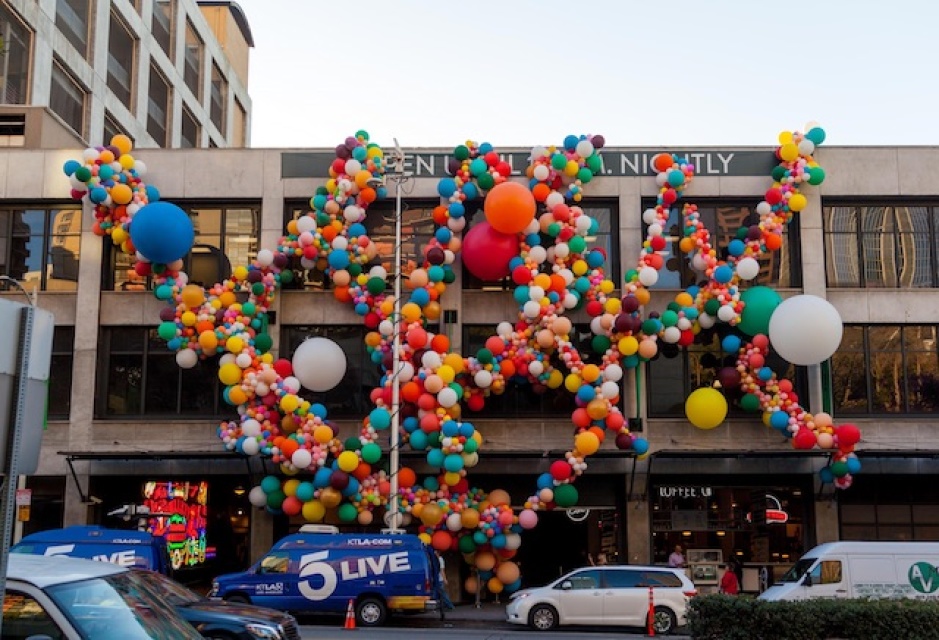 Settling down in L.A., she hung out in the Arts District, exploring her hobby alongside creative friends. Then a blogger reached out to do a post on her balloon work.

"At that point I had never sold any," she said. "So I had a friend from high school slap together a really quick PayPal 'buy it now' link on a website."

Almost overnight, her business was born.

Geronimo Balloons, named after the happy cry of paratroopers, was doing well. She was invited to A-list parties, where the likes of Taylor Swift and Kanye bought her balloons in singles or clusters. Each balloon went for roughly $100.

It allowed her to stop sleeping on the floor of her studio and hire a team — but she started to feel like she needed to do something different.

"For me, it wasn't interesting doing parties any longer," she said. "I also wanted to create something that wasn't so exclusive to individuals."

In 2015, Cadillac asked her to do a commercial. They wanted to see the balloons she was known for, but she wanted to do something new.

"I kind of wanted to create something that was living outside of my studio." 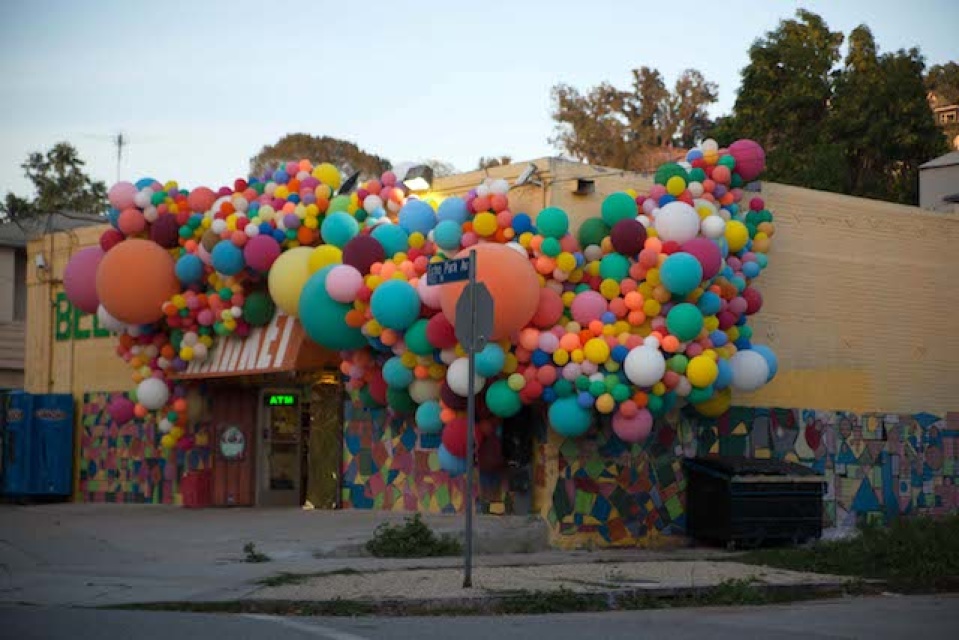 So she created a huge blush-toned grouping of balloons that poured out of a bodega down the street from her Echo Park studio.

"It's funny, because on the internet people really hated it. It looked like an STD, they said." Uh oh. "We made this commercial and the photos from it went fairly viral. Sia, who lives up the street, drove by and she posted a photo on Instagram."

That started the next phase. Geronimo Balloons no longer sells those individual balloons — but others do, as she's inspired a string of copycats.

On a recent weekday, Zencirli walked around a party store in Downtown L.A.'s piñata district.

She approached a shop clerk: "Hey, do you know if you have the balloon tassels?"

The woman led her over to a wall of party decor. Along a shelf were clear cylinders, filled with balloons and pastel paper tassels.

"I invented it," she said with a laugh. "This didn't exist to hang off a balloon."

No, nowadays it's all about being outside. Zencirli wants most of her work, whether paid or pro bono, to be available for public consumption.

By the way — in case you're wondering, her balloons are all air-filled and biodegradable.

"I think that's the most important part of what I can create, is just a free experience for someone to have, something that excites them and maybe changes how they feel about life, maybe they feel a little bit of magic." 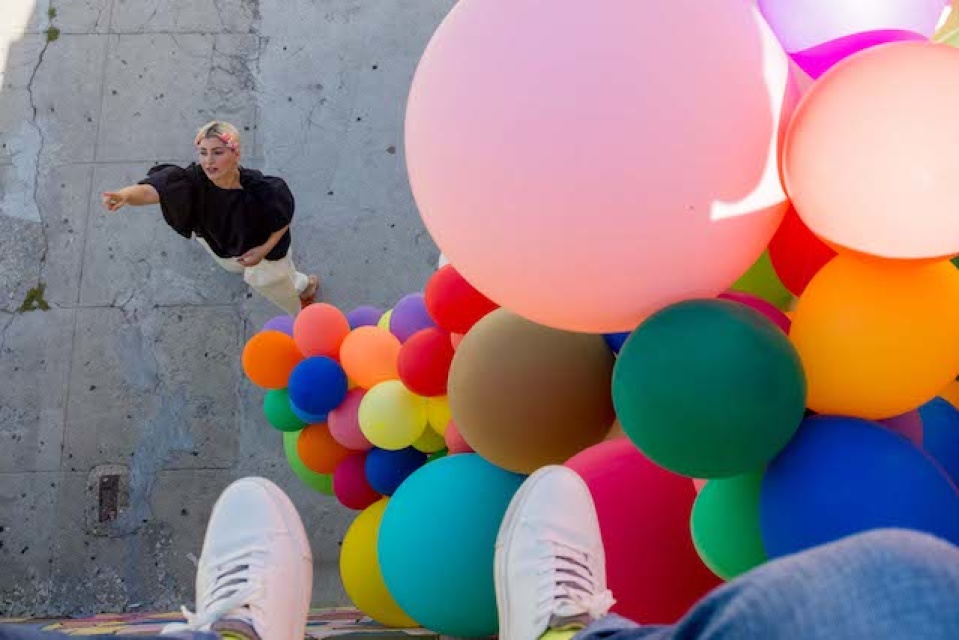 Sometimes, the day after an installation, she'll park around the corner and watch people's reactions.

"Mostly it's selfies," she said. "Then it's someone who is riding by on their bike and they decide to rip off some of it. ... And then it's sometimes people licking it, or putting their bum on it."

Even though she's busy as ever, jet-setting across the world for jobs, she thinks about the next spot in L.A. she might hit.

"It would be something like I'm driving down Sunset and the light is hitting me, and I look over at this building, and I realize everyone needs to see something there tomorrow."

She recently moved to South L.A., and her eyes on a nearby building. It looks like an old church.

"I'm really excited to just cover it all in balloons," she said. "It's abandoned, so no one can really say otherwise."

It's tall and might involve some Spider-Man moves. Her plan of attack? Blowing up balloons in her backyard and walking them over in the middle of the night.

"I think I would be fine living the rest of my life being the eccentric woman who moves around and creates balloon sculptures on every corner."