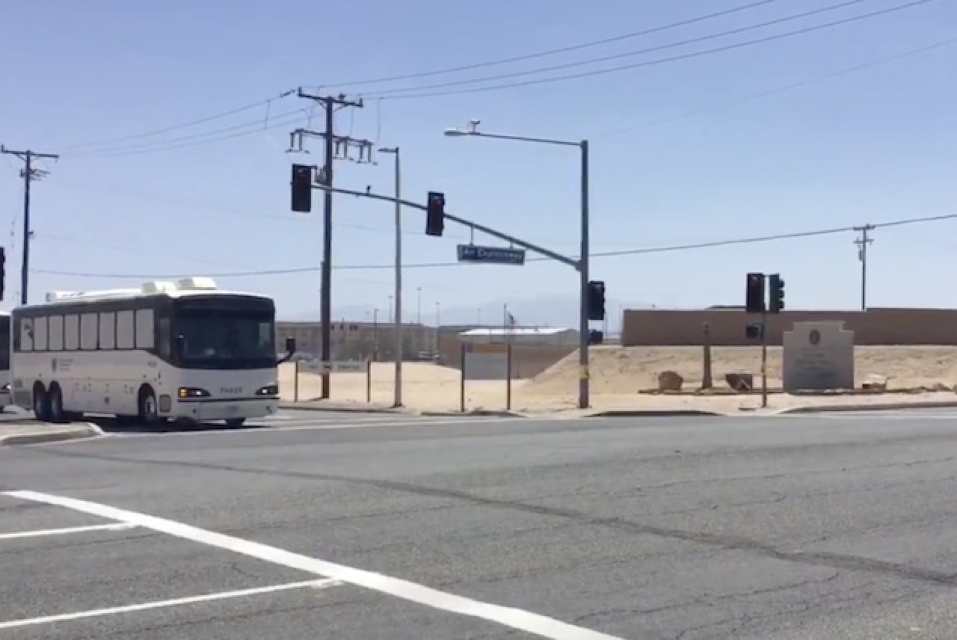 An immigrant detainee held in the federal prison complex in Victorville, California has been diagnosed with chickenpox, according to a letter from the warden obtained by KPCC/LAist.

"Measures are being taken to identify and contain inmate contacts who are at risk for getting chickenpox," the letter said. It was sent out midday Monday via email to over 800 prison staff members.

The letter notes the varicella virus that causes chickenpox is highly contagious and "can be spread 1-2 days before the rash starts until all blisters are crusted over." 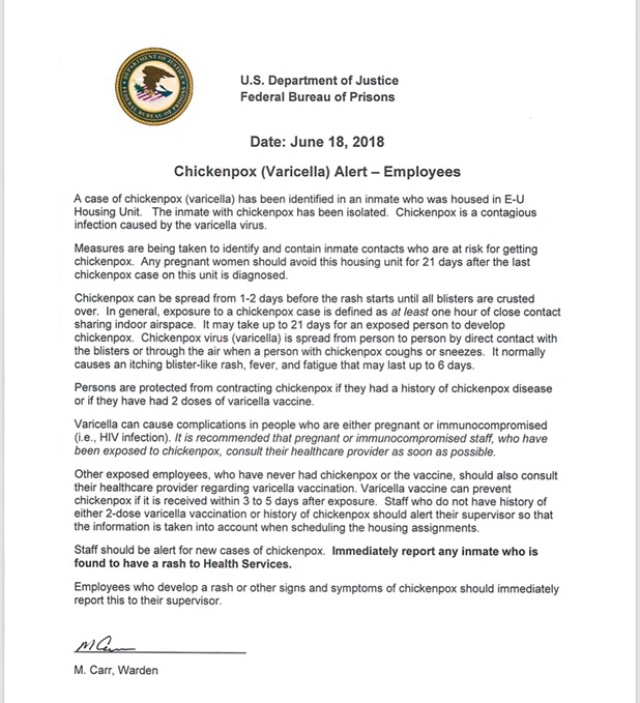 The CDC reports the disease spreads "mainly by touching or breathing in the virus particles that come from chickenpox blisters, and possibly through tiny droplets from infected people that get into the air after they breathe or talk." It takes 10 to 21 days after exposure to develop chickenpox.

It's not clear how many of the immigrant detainees were exposed.

After prison medical staff confirmed the case of chickenpox, the immigrant detainee was isolated and "[t]he affected housing unit was secured and medical exams are being conducted for all inmates housed in the unit," the Bureau of Prisons said in a statement. "Additionally, a specialized cleaning of the housing unit and visiting room were also performed. Visitors are being advised of the situation at the front entrance to the facility."

The statement added, "[a]ll ICE detainees were medically screened upon arrival... as part of the intake process."

E-U Housing Unit is one of about 12 units that in the medium security facility where ICE has contracted with the Bureau of prisons to house up to 1,000 adult male immigrant detainees.

The agreement was announced June 7, and marks the first time federal prisons were used to house immigrants in the U.S. on a large scale.

An ICE spokesperson said the agency needed space in prisons "due to the current surge in illegal border crossings and implementation of the U.S. Department of Justice's zero-tolerance policy."

The arrangement is initially scheduled to last 120 days, but is flexible up to a year.

On Friday, members of the local prison guard union representing about 650 employees picketed across the street from the Victorville complex, calling attention to low staffing levels they argue could put guards and inmates in danger.

Staffing in the medical unit, including doctors, nurses, and medical assistants was of particular concern to the members of American Federation of Government Employees Local 3969.

The union's Vice President told KPCC/LAist they got only 48-hours notice from the warden before the first buses filled with migrants began arriving at the prison gates.

The union was informed no new hires would bolster its ranks to help with the expanded mission to guard immigrants. Union representatives said their members were already stretched thin after months of a hiring freeze.

In a June 8 blog post, union president John Kostelnik said the agreement to house 1,000 immigration detainees in Victorville "was not properly planned or processed. None of the agency representatives stood up and informed DOJ or ICE that we were not ready to accept this influx of inmates with the current staffing levels."

The union has been raising red flags about low staffing levels for months. In September, Congressman Paul Cook made an official inquiry into the issue after a handful of inmate assaults on prison guards resulted in minor injuries.

An ICE spokesperson said in an email, "ICE is closely monitoring the situation," and "ICE is confident in the care and oversight provided by the BOP and believes these are extremely safe and secure facilities for ICE detainees."

The all-staff letter said Victorville prison employees who are pregnant or immunocompromised are encouraged to consult their doctor as soon as possible, and "pregnant women should avoid this housing unit for 21 days after the last chickenpox case on this unit is diagnosed."

Today, most children in the United States are vaccinated against chickenpox. Deaths and hospitalization due to chickenpox plummeted in the U.S. after the vaccine became available in 1995.

This story was updated at 4:45 p.m. with a statement from the Bureau of Prisons.