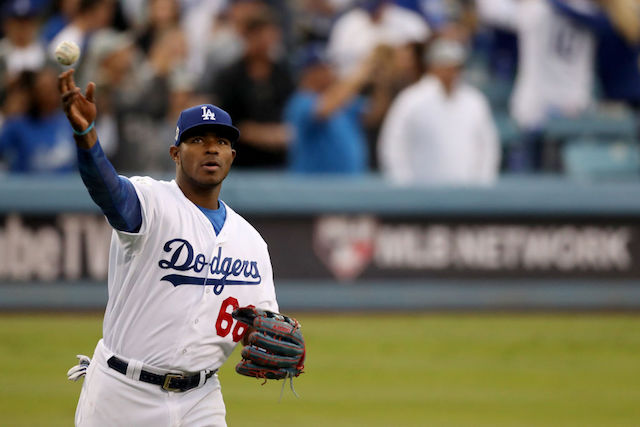 Wednesday night went horribly for Yasiel Puig. Not only did the Dodgers lose Game 7 to the Houston Astros, they also did it in the most boring and uninspired fashion possible. Puig himself went 0-for-3 at the plate.

As if that wasn’t a big enough bummer, his home in the Valley was also burglarized overnight. The LAPD confirmed to CBS 2 that an investigation is taking place at the Encino-area home.

According to TMZ, police say that Puig wasn’t targeted, and that the home was broken into by a transient who left with $150 in costume jewelry. The burglar had reportedly smashed a window, setting off an alarm. The incident was caught on surveillance video.

A CBS reporter said that Puig’s dogs may have gotten out of the home during the burglary:

Neighbors rounded up #YaiselPuig ‘s dogs who may have gotten out during burglary. #Dodger was playing #Astros when his house was burglarized pic.twitter.com/fD8Ge8du9M

This isn’t the first time that burglars have entered a home belonging to Puig. In February, a break-in at his Sherman Oaks home resulted with $170,000 in valuables being stolen from the residence. The incident happened at a time when a rash of other high-profile burglaries were taking place. In that same month, Alanis Morissette's Brentwood home was burglarized and had $2 million in jewelry stolen. In late January, it was reported that ex-Laker Derek Fisher's Tarzana home was burglarized; $300,000 worth of jewelry was taken from the residence. The LAPD has not said if the spate of celebrity burglaries were connected.