Is The End Nigh For The Westside Pavilion? 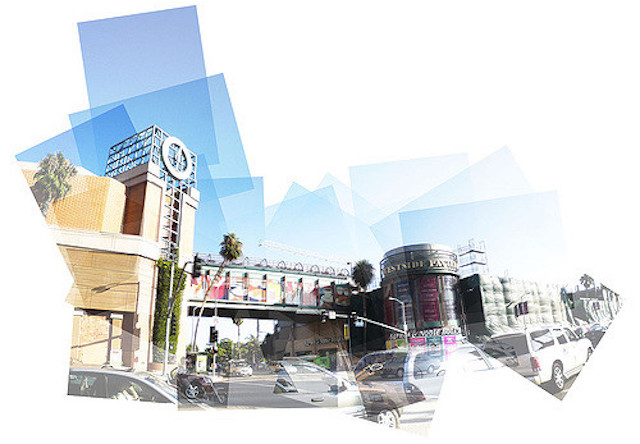 Westside Pavilion panorama. (Photo by hellfroze via the Creative Commons on Flickr).

Few institutions have fallen further from grace than the American Shopping Mall. Once, everyone wanted to go to the mall; now, the abandoned carcasses of shopping malls litter the country like half-sunk travelers from an antique land.

In its late '80s/early '90s heyday, the three-story Westside Pavilion was practically the platonic ideal of an indoor mall. The Westside consumerist palace reigned supreme, serving as Cher Horowitz's "sanctuary" in a scene from Clueless (it also made an appearance in Tom Petty and the Heartbreaker's video for "Free Fallin'). In 1989, the Westside Pavilion was even chosen to house very first outpost of the teen mall store to end all teen mall stores: Aéropostale. But times have changed.

The Miami Vice colors and faux-European arcade details no longer seem so modern, and the tide has long since turned from indoor malls to outdoor, Disney-ified "Main Street" spaces like the Grove. Aéropostale filed for Chapter 11 in 2016. And last week, Macy's announced plans to close their 220,000-square-foot Westside Pavilion location (the big box chain was a major anchor of the mall—and its last remaining department store after Nordstrom relocated to Century City). To add death knells to death knells, Amazon couriers will soon be able to deposit purchases inside your house. (On a side note, we've heard from a very reputable source that a sound of a death knell hitting a death knell is actually not dissimilar to the whirring noise made by mall escalators ridden by no one).

Now, mall landlord Macerich Co. has announced that they are actively speaking with potential buyers for the Pico behemoth, including—according to the Wall Street Journal—potential buyers "who might have another use for the space" [read: not an indoor mall].

During the Macerich's third-quarter earnings call on Tuesday, CEO Art Coppola predicted that the company will have offloaded the 755,000-square-foot property within a year, after having received interest from a number of buyers.

“West L.A. has too many malls chasing the same customer and it was due for consolidation,” Coppola told the Journal.

If the explosive proliferation of American shopping malls was, at least in part, jumpstarted by the Eisenhower-era passage of the Interstate Highway Act (which authorized the construction of a 41,000-mile network of nation-spanning highways—and a new American way of life), then surely there is some symmetry to other reason Coppola proffers for why the Westside Pavilion may not survive in its current form: the new light rail station a few blocks away.

In famously car-centric Los Angeles, the Westside Pavilion's proximity to the Westwood/Rancho Park Expo Line station "has many potential buyers thinking about options for the site that aren’t a mall," as Curbed LA put it.

“It’s quite likely that other users are going to value that real estate more than a horizontal retail facility, and we’re seeing that in terms of the demand and that’s coming from really a tremendous number of people,” Macerich told the Journal.

And what, pray tell, could a rezoned second life for West L.A.'s once formidable shopping mecca look like? Coppola doesn't speculate, but the dead and dying malls of the late great United States have been reborn in a number of creative ways, including as schools, churches, micro-apartments, and arts incubators. A former indoor mall in Cleveland has even been partially converted into a vegetable garden (perhaps an homage to the Talking Heads' "Nothing But Flowers"?).

The sky's the limit—quite literally, since the new buyer's first move will more than likely be to rip off the roof, a la downtown L.A.'s newly-repurposed The Bloc.