The McRib Is Back In SoCal, Baby 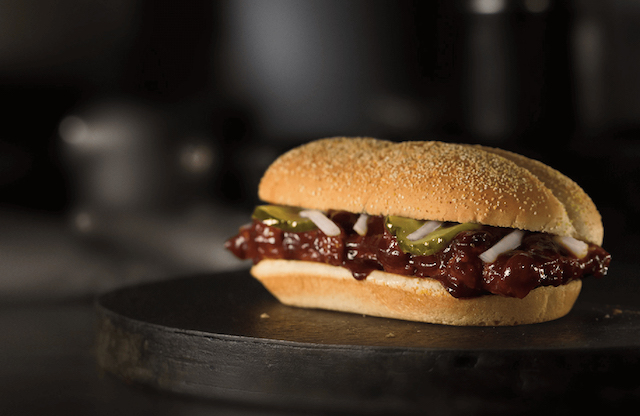 The McRib in all its glory. (Photo courtesy of McDonald's)

It's a grim day for many Southern Californians, as we try to process the heartbreak of Wednesday's Dodgers loss. Luckily, McDonald's has stepped up to fill the void in our souls by bringing back an old friend from our past: the McRib sandwich.

The McRib turns 35 this year, and to celebrate its midlife crisis, it's hitting selected McDonald's restaurants in Southern California and around the U.S. starting Thursday. We all know by now that there are zero ribs in a McRib, but questions persist as to what, exactly, the elusive sandwich does contain.

Rumors have swirled about the McRib containing everything from restructured pig innards to soles of shoes, but according to a spokesperson for McDonald's, a McRib pork patty consists of "pork, water, salt, dextrose and rosemary extract." Hmm. Hey, in this age of food scales and activated charcoal, isn't not knowing what the hell you're putting in your body half the fun? If it's good enough for the Osbournes, it's good enough for us:

The McRib's return this Thursday marks its first appearance since December 2016, and this time around, pork-and-BBQ-sauce aficionados will be able to get their fix using a "McRib Finder" app .

A press statement from McDonald's says customers can use the app to "find locations, swap McRib-themed stickers and plan McRib sandwich dates with their friends," which...sure. After the way Szechuan Sauce blew up post-Rick and Morty, maybe a new McRib-centered cultural zeitgeist isn't far behind.