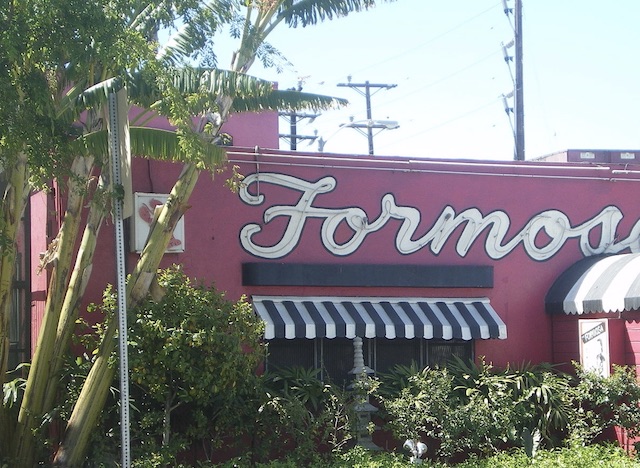 The Formosa Cafe in West Hollywood. (Photo via Wikimedia Commons)

Hearts broke when the historic Formosa Cafe quietly closed down last January. Luckily, news surfaced in June that the nearly century-old Hollywood institution would reopen under new management, and the cafe's preservation is about to get easier with the help of National Trust for Historic Preservation, who announced Thursday that they would award the Formosa with a $150,000 grant to preserve its signature trolley.

The Pacific Electric Red Car trolley at the center of the Formosa Cafe is the oldest part of the building, having been repurposed into a lunch counter in 1925 by Formosa founder and ex-prizefighter Jimmy Bernstein, KCET reports. Originally called the Red Spot. the Formosa Cafe spent decades serving up Cantonese cuisine to generations of Hollywood stars from Ava Gardner to Christian Slater.

Now, the restaurant has prevailed over 24 other locations to win the National Trust for Historic Preservation grant, thanks to an online campaign promoted by the West Hollywood Preservation Alliance and the L.A. Conservancy.

1933 Group, the developers who signed a long-term lease with the Formosa Cafe last summer, announced their intention to restore the old-Hollywood haunt to its former glory, with partner Bobby Green telling LA Magazine, "We’re gonna put it all back."

1933 Group brought the Thirsty Crow to Sunset Boulevard in Silver Lake, and was behind the resurrection of historic Mr. T's Bowl & Nightclub as Highland Park Bowl; they claim they could have the Formosa open again as soon as next year, Curbed reports.