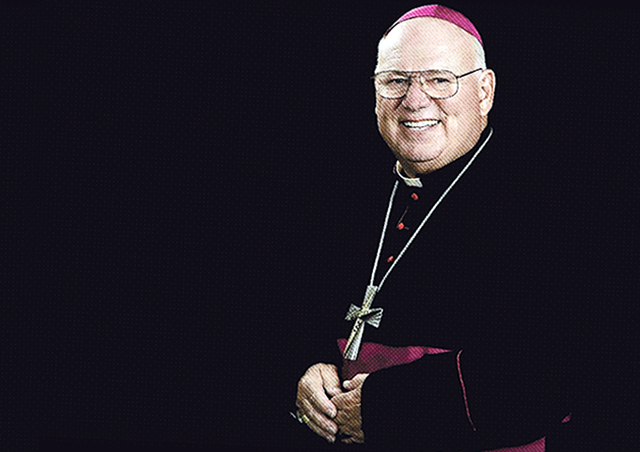 Catholics across Idaho are in mourning after the Oct. 24 death of longtime Diocese of Orange Bishop Michael Driscoll. Obituaries across the state noted the good deeds the 78-year-old Long Beach native (who will be buried Thursday) implemented in his 15-year term from 1999 to 2014: the introduction of the nonprofit Catholic Charities, an emphasis on tending to Idaho’s growing Latino population, and an increase in the number of priests and deacons.

But none of the Gem State’s newspapers bothered to mention Driscoll’s actual legacy: as an enabler, apologist and longtime keeper of secrets in the Diocese of Orange’s pedophile priest scandal.

I knew His Excellency well. From 2004 until about 2007, I was a one-man Spotlight against the Orange diocese for OC Weekly. In story after story, I showed how diocesan officials actively covered up priestly sex abuse, doing everything from shaming victims into silence to shuffling offending priests from parish to parish to not reporting them to law enforcement—and worse.

And during his 23-year career in Orange County, Driscoll was the conductor in the middle of it all.

He was named chancellor when the Diocese of Orange split from the Archdiocese of Los Angeles in 1976. In the Roman Catholic Church, a chancellor acts as the record-keeper for his diocese, fielding all complaints against priests and reporting any findings to his superiors. That meant Driscoll dealt directly with all sex-abuse allegations from 1976 until 1986, when he became vicar general—the right-hand man of new Bishop Norman McFarland, and the person charged with disciplining wayward priests. He kept that role until 1989, when McFarland made Driscoll an auxiliary bishop in 1989.

Not a bad trajectory for a man who actively protected child rapists, right?

Space—even online—prohibits me from listing all of Driscoll’s sins, so I’ll just mention the most egregious examples, because they happen to involve bona fide monsters.

In 1976, Driscoll received a letter from Archbishop William Cousins of the Diocese of Milwaukee regarding Father Siegfried Widera, who was set to visit Orange County. Cousins asked Driscoll to give Widera a temporary assignment as a sign of “fraternal charity” even though Widera had “a moral problem having to do with a boy in school,” and that there had “been a repetition” severe enough that state psychiatrists gave the “strong recommendation that no immediate assignment be made in the environs” of Milwaukee for Widera.

Widera, in fact, had been convicted in 1973 of molesting a boy. Yet the Orange diocese fully accepted Widera, whose rape of young boys was so horrible that then-Bishop Tod D. Brown agreed to pay $17.7 million in 2005 to nine of Widera’s victims. That was part of a $100 million settlement with other victims—at that time the largest such payout in the history of the Catholic Church in the United States. The Orange County Register noted at the time that Widera’s victims were among “the most grievously abused.”

Driscoll didn’t just take in pedophiles, he also helped them resettle elsewhere. In 1985, he asked church officials in Liverpool, England, to take the Reverend Robert Foley, who had admitted to molesting an 8-year-old boy during a Boy Scouts camping trip organized by St. Justin Martyr in Anaheim. The boy’s mother, Driscoll wrote, “threatened to go to the police,” and Foley “is in jeopardy of arrest and possible imprisonment if he remains here.” Foley left the U.S. for England soon after; he never faced prosecution.

And in 1984, he wrote a letter praising Franklin Buckman, who had just left St. Polycarp in Anaheim for the remote Diocese of Baker in eastern Oregon. “He will be a blessing to you and your diocese,” Driscoll wrote to Baker officials, “and he is always welcome to 'come home' with us”—not revealing that Buckman was facing a sexual abuse allegation (the Orange diocese settled a case against the priest in 2005 for $1.9 million).

Widera, Foley and Buckman, however, didn’t compare to Eleuterio Ramos. Ramos was the worst pedophile priest in the history of the Orange diocese, admitting to molesting “at least” 25 boys during a career that started at St. Thomas the Apostle in Los Angeles 1966 and ended in Tijuana in 1991.

And Driscoll was there to cover up for Ramos every step of the way.

Upon becoming the Orange diocese chancellor, Driscoll would’ve learned about a letter in Ramos’ personnel file written by the Orange County District Attorney. Back in 1975, when OC parishes were still under the Archdiocese of Los Angeles, the http://www.bishop-accountability.org/docs/orange/ramos/orange_50600006_PF_ramos.pdf District Attorney had suggested that Ramos see a psychologist “as a result of a recent incident.” As chancellor, Driscoll fielded multiple complaints from parents, teachers and even other priests about Ramos’ predatory ways as he moved from parish to parish. And it was Driscoll who helped Ramos leave to Tijuana in 1985 after the priest admitted to molesting yet another boy.

“We deeply regret the problems he has,” Driscoll wrote to Diocese of Tijuana Bishop Emilio Berlie (who ended up placing Ramos in a children’s ministry), “and hope that he may now completely come to grips with facing these problems and overcoming them."

Yet when he was deposed in 1991 as part of a civil lawsuit filed by a Ramos victim, Driscoll claimed under oath during a deposition that he "didn't received any complaints [about Ramos] specifically to me”—despite letters that lawyers dug up detailing Ramos allegations in Driscoll's writing.

In a 2005 letter printed in the Idaho Catholic Register, shortly before thousands of pages of documents were released with his name all over them, Driscoll stated he was "deeply sorry that the way we handled cases [in Orange County] allowed children to be victimized by permitting some priests to remain in ministry, for not disclosing their behavior to those who might be at risk, and for not monitoring their actions more closely."

And that penance worked—so much so that both the Los Angeles Times and Orange County Register didn’t even bother to print an obituary about him (mostly because the editors and reporters who covered the sex-abuse scandal 12 years ago are long gone from the papers).

Such amnesia doesn’t sit well with John Manly. He was one of the lead lawyers in securing record-breaking settlements against the Orange diocese and Los Angeles archdiocese, and in recent years has represented victims in the Miramonte Elementary School sex-abuse scandal and gymnasts who say longtime USA Gymnastics doctor Larry Nassar sexually abused them.

“Bishop Driscoll’s systemic protection of child molester priests not only allowed children of the Diocese to be savaged by predators,” says Manly, who served under Driscoll as an altar boy at St. Catherine’s Military School in Anaheim. “His conduct destroyed lives, families and took the innocence of thousands. It also decimated the moral authority of the Church to speak on social justice issues. No one listens to someone who protects child rapists. That’s his legacy. Good riddance.”

Gustavo Arellano is the former editor OC Weekly and the nationally syndicated “Ask a Mexican" column, and the author of “Taco USA: How Mexican Food Conquered America".