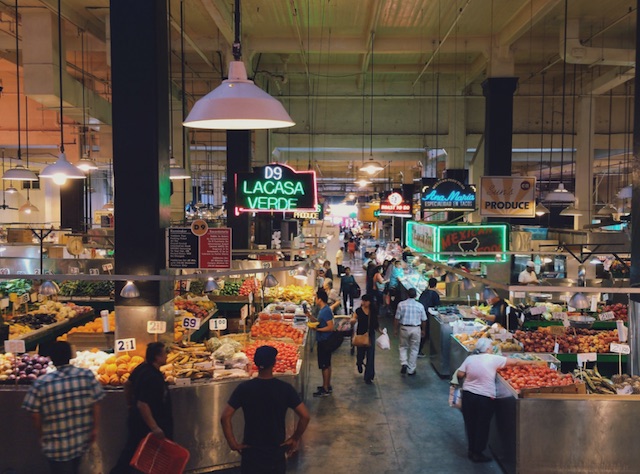 (Photo by Howard F. via the LAist Featured Photos pool on Flickr)

Langdon Street Capital, the new owners, made the announcement on Wednesday morning. Their purchase also includes the nearby Million Dollar Theatre, Grand Central Square Apartments, and Grand Central Parking Structure, reports Eater LA. Both Grand Central Market and Grand Central Square are currently listed on Langdon Street Capital’s website as being part of the company’s properties, which also include a stretch of buildings along York Boulevard in Highland Park, as well as a 21,000 square-foot building by the intersection of Beverly Boulevard and Vendome Street in Rampart Village. Tuesday’s purchase seems to mark the company’s most ambitious purchase in terms of scope and size.

Speaking with the Times, Adam Daneshgar, president of Langdon Street Capital, maintained that the company isn’t planning for any major changes. “We just want to safeguard this place,” said Daneshgar. “We are not looking to go in and change or overhaul anything.” Instead, said Daneshgar, the company will spend “several million” dollars on maintenance work, and providing minor upgrades such as repainting the walls and changing the lights. A release by the company said that “Langdon’s plan is to invest significant capital to enhance the Market and update the hospitality experience while being sensitive to the historic character of the property.”

Grand Central Market was last owned by the Yellin Co., founded by the late Ira Yellin. As explained in a very insightful LA Mag story about the past and present of Grand Central Market, Yellin put down $5.5 million to buy up the space in the mid 1980s. “I basically thought he was crazy,” said Adele Yellin, current president of Yellin Co. and widow of Ira Yellin. While the space (and Broadway at large) had become a commercial hub for Latino business owners by then, it was forgotten by many outside of downtown L.A.— a lingering effect of the decentralization of L.A., when more affluent classes were spreading out to other parts of the County via the freeways (Bunker Hill is perhaps the best-known casualty of this phenomenon).

Ira died in the early aughts, leaving Adele to helm the operation. Around 2010 Adele would push for new stalls to be included, timing her move with the new influx of younger, upwardly mobile professionals. Stalls such as Wexler’s and Eggslut would join the space, becoming neighbors with old stalwarts like Tacos Tumbras a Tomas and China Cafe. Certainly, claims of gentrification followed behind.

Langdon Street Capital is now the fourth ever owner of Grand Central Market. The sale price was not disclosed.

Here's a video (shot by the legendary Haskell Wexler) of the market in the 1960s: