A Guide To Eataly's Cheese Producers, From The Local To The Italian 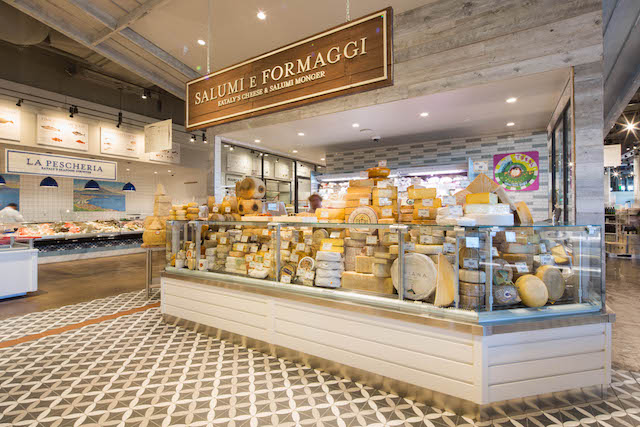 When Eataly opens its first West Coast location at Westfield Century City on Friday, it promises to deliver on what the decade-old Italian institution has dubbed “culinary theater.” That means there’s not just one restaurant but four of them alongside nine eateries, a pair of cafes, two bars, five different retail departments and another five production counters where you can watch pasta, mozzarella, bread, gelato, and cannoli being made fresh daily.

The international one-stop culinary emporium is a little like an amusement park-sized shrine to Italian cuisine: There’s a butchery, a bakery, a seafood counter, and even a place to buy housewares, so you can source and plate an entire dinner party from start to finish in the same place, after you’ve scarfed down some fresh-made pizza or pasta in-house. But Eataly’s array of high-end, carb-heavy offerings is arguably overshadowed by its mountain of cheeses, which at its Los Angeles salumi & formaggi counter will come from dozens of independent producers from California to Italy.

Among Eataly’s local suppliers is Di Stefano Cheese, a family-owned dairy company and cheese plant in Pomona. Founder Mimmo Bruno says two of his cheesemakers will be on hand at Eataly every day to prepare fresh mozzarella and burrata, which will also be served at Eataly’s restaurants and available for retail purchase. His game plan? “We make our curds here at Di Stefano, and then we bring it fresh every morning and we stretch the mozzarella there and then it’s packed in cups and then it’s served to the restaurant inside Eataly,” says Bruno, who was raised in the Puglia region of Italy and got his first job at a cheese factory when he was eleven years old.

He’s been working in the industry ever since and even claims to have been the first artisan cheesemaker to recreate Burrata (or mozzarella stuffed with cream) in the United States after he moved here in the early 1990s. Bruno founded Di Stefano — named for his father and his oldest son, who also works at the factory — in 2008 after selling his previous cheese company, Tutto Latte Mozzarella, in 2001. Today, Di Stefano produces its own milk and curds from about 800 grass-fed cows who live on a dairy farm in Chino and sells its products at Whole Foods and other specialty grocers worldwide. Eataly Los Angeles will be the first Eataly to stock Di Stefano’s products, Bruno says, and he expects that he’ll be supplying them with about 60 pounds of cheese a day, at least to start.

Aside from cheeses and other selections sourced locally, Eataly specializes, of course, in food imported straight from its namesake country, Italy. Marcelli Formaggi, a family-owned company that produces cheese and other products from its farm in idyllic Abruzzo, Italy, is among the handful of cheese suppliers for Eataly locations around the world. Co-owner Andy Marcelli says his ten-year-old company has worked with Eataly since 2010, and now supplies nearly a dozen different kinds of cheeses to all five of its U.S. locations including the new one in Century City, marking Marcelli Formaggi’s first foray into the L.A. market.

“We’re a great fit for Eataly because we’re bringing in products just from one region of Italy and they don’t really have any other cheese from that area,” says Marcelli, who also spent several years working for Eataly as a buyer and helped set up their beer program in Manhattan. “They like to focus on all of the regions of Italy, so we help them be diverse in all of the regions they have products represented from.”

Abruzzo, the region where Marcelli’s family’s farm is located, is nicknamed the "green heart of Europe," he says, because of its abundance of national parks — which also makes it a good place to raise sheep. “Our family sheep are grazing in a national park here where they have access to over 100 flowers and herbs,” he says. “They’re eating wild sage and rosemary and all these different flowers and herbs, so that’s some of the flavors you get when you eat that cheese.”

Feeling overwhelmed by Eataly’s vast range of cheeses imported from Italy? Marcelli recommends starting with Grana Padano or Parmigiano-Reggiano, which he calls “the kings of Italian cheese.” The large-format cow’s milk cheeses, aged anywhere from a year to three years, are both comparable to what Americans might refer to as Parmesan cheese. If you’re looking to expand your cheese repertoire outside of cow’s milk cheese, Marcelli suggests Pecorino Romano, which is typically used for grating over pasta.

When in doubt, “Your best bet is to go to the cheese counter and ask the cheesemonger,” says Marcelli. Because as Eataly states in the first policy of its manifesto, “the customer is not always right.” Especially when it comes to cheese.