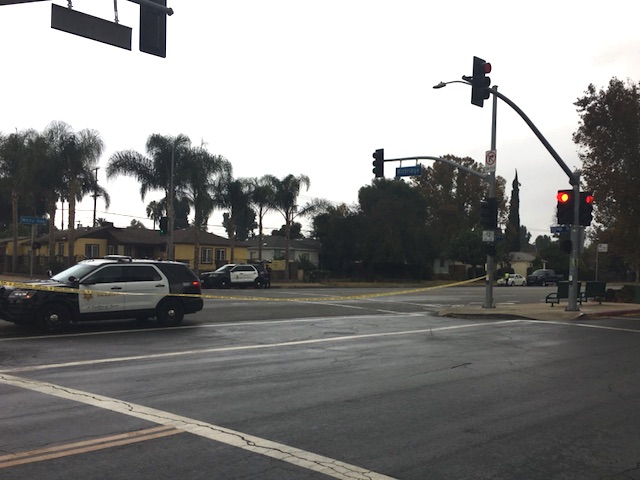 At the intersection of White Oak Avenue and Kittridge Street in Reseda. (Courtesy of the L.A. County Sheriff's Department/Twitter)

A shirtless suspect in a stolen Sheriff’s SUV led authorities on a pursuit through the Valley early Tuesday morning, at one point colliding into another deputy car, which led to shots being fired at the suspect.

Sara Rodriguez, deputy public information officer with the Los Angeles County Sheriff’s Department, told LAist that the incident started at approximately 6:34 a.m. on Tuesday. The suspect is believed to have gotten into the Sheriff’s vehicle in the parking lot at Olive View-UCLA Medical Center in Sylmar.

According to CBS 2, LASD and California Highway Patrol started pursuing the suspect in the Santa Clarita area, with the chase going from the 210 Freeway in Sylmar, to northbound Interstate 5, and northbound State Route 14 before going onto surface streets. The suspect then drove through Northridge.

KTLA reports that, at one point, the suspect collided with another Sheriff’s department vehicle. A deputy got out of another vehicle and fired shots at the suspect. Rodriguez said that the suspect was struck.

The suspect continued driving and eventually came to a stop at White Oak Avenue and Kittridge Street in Reseda. The suspect got out of the vehicle and surrendered to authorities at about 7:17 a.m. KTLA reports that it seemed as if he had an injury on his shoulder. Rodriguez said the department could not speak on the extent of the suspect’s injury; a later LASD release said that a suspect shot at 7:13 a.m. on Tuesday at the corner Roscoe Boulevard and White Oak Avenue—two miles from where the suspect later surrendered—was transported to a hospital for treatment of non life-threatening injuries.

The suspect’s identity has not been released.