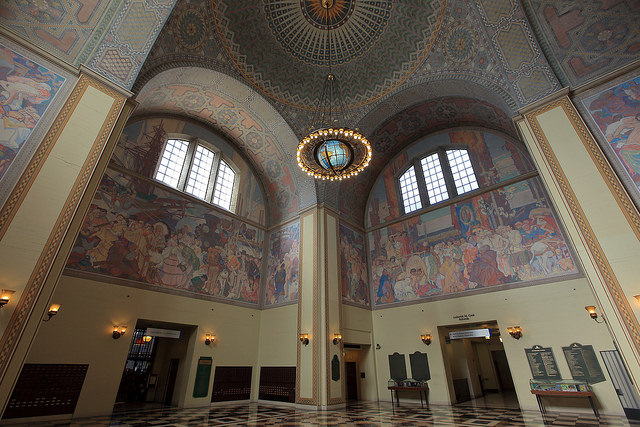 The World Series can be a divisive force. It can lead hot dog stands located about 1,500 miles apart to turn against one another. Police chiefs from one city will make a wager with a police chief from another. Even food critics will adopt the spirit of antagonism.

One especially interesting rivalry is happening between the L.A. Public Library and the Houston Public Library, and it’s playing out in a very public forum: Instagram. What’s going on is that the LAPL and the HPL are using book titles (from book spines) to @ one another and root for their respective teams in the World Series. The LAPL describes this “book spine poetry trash” talk as a “library tradition.” While we’ve seen these things play out before (like when Metro and the Bay Area’s BART engaged in a poetry face-off on Twitter), this one is particularly ingenious, and makes the literary nerd in us feel validated.

It all started on October 24, the day of Game 1. The LAPL threw some major shade by referring to Houston’s team as Astro Bunnies (which, according to Amazon, is a children’s book about “inquisitive bunnies”—looking “suspiciously like toddlers in ‘feety’ pajamas'”— hitching a ride on a rocket going into outer space):

With the @dodgers in the #WorldSeries we had to continue the public library tradition of book spine poetry trash talk. #thisteam Game on Astro bunnies You got this Dodgers

The Dodgers took Game 1 after a solid showing by Clayton Kershaw on the mound. The LAPL gave a nod to L.A.’s ace, while also showing some good sportsmanship. Do Not Lose Heart, written by Dave Dravecky and Jan Dravecky, is apparently a serious self-help guide that provides “devotional thoughts for those who are suffering.” How apropos.

Game one is in the 📚 and #WorldSeries book spine poetry challenge with @houstonpubliclibrary is heating up. #ThisTeam

The HPL wanted us to know that the Astros remained undaunted by defeat. According to Goodreads, Renee Collins’ Until We Meet Again (below) is about a protagonist who meets a “dreamy stranger” on a beach and “is swept into a mystery a hundred years in the making.”

After a tough loss, the Dodgers found themselves in Texas. The LAPL sent out some positive vibes from the mothership:

We needed a day to recover after that last one, but there's no doubt the Los Angeles Dodgers are ready to bounce back today. #WorldSeries #ThisTeam

The HPL, with their team back at home, projected plenty of confidence. Also, Cat Patrick’s Revived sounds like an intense read, as it involves a young girl injured in a bus crash, who later becomes “one of the first subjects in a covert government program that tests a drug called Revive.”

A brutal Game 3 proved costly for the Dodgers, and the LAPL was suddenly tasked with lifting our spirits. Here, for the first time, we see a DVD being used (hey, when you’re heartbroken all you want to do is veg out to a movie). The somewhat forgotten and vastly underrated Better Luck Tomorrow (which features John Cho), makes an appearance:


Tomorrow is a new day. #thisteam

After going down 2-1, it was imperative for the Dodgers to take Game 4. Alex Wood rose to the occasion and went five strong innings, leading the Dodgers to a 6-2 win. The LAPL found a renewed sense of confidence. By the way, Ruth Logan Herne’s Back In The Saddle is about one “Colt Stafford” who possibly regrets having “shrugged off his cowboy legacy for shiny Manhattan loafers and a promising career on Wall Street.”

True blue fans never had a doubt. Two down, two to go. #thisteam

The HPL took it in stride, promising swift vengeance for Game 5. What Are The Chances written by Bart K. Holland, is about “Voodoo Deaths, Office Gossip, and Other Adventures in Probability” according to John Hopkins University Press.

That was a hard one to take, but we'll be back no doubt! #Astros @lapubliclibrary #houstonlibrary #WorldSeries

And then…oh boy, the Dodgers lost a wild heartbreaker in Game 5. The HPL were pretty ecstatic, of course. In either an intentional or unintentional jab at L.A., they used I Live For This! by longtime L.A. Times sportswriter Bill Plaschke:

That's what you call a comeback! And the #Astros did that! #EarnHistory #WorldSeries @lapubliclibrary @ladodgers @houstonastros #houstonlibrary

The LAPL then sent out the longest message thus far, with a Vin Scully bobblehead for added luck. There’s also Jean Ure’s 1968 novel You Win Some, You Lose Some, which has nothing to do with baseball, but is instead about one Jamie Carr, who’s hoping to win a place in a prestigious London ballet school: “Life on his own is full as he juggles a job in a department store and a dance class every night while wondering how to get along with his roommate in their seedy apartment.”

Last night was a roller coaster of a game but the Dodgers are headed back home. We're bringing the Vin Scully bobblehead out for the rally.

So this is where we stand at the moment. Here’s hoping that the Dodgers pull through with a win tonight at Dodger Stadium. Also, shout out to Jamie Carr; we hope all your ballet dreams came to be!