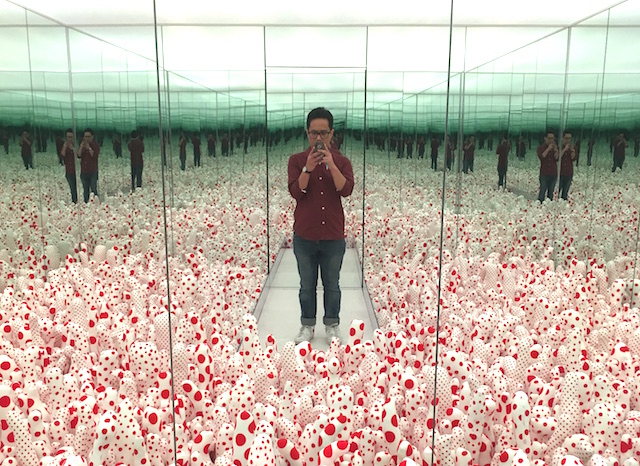 Yayoi Kusama's "Infinity Mirrors" exhibit finally dropped earlier this month at The Broad Museum, and, as expected, visitors have been using selfies to document their jaunts to the Japanese artist's mirrored rooms.

Certainly, this has been criticized as being a shallow and self-serving way of experiencing Kusama's works, but others have framed it in a different light, suggesting that selfies are actually a logical extension of the rooms. Mika Yoshitake, who curated the "Yayoi Kusama: Infinity Mirrors" touring exhibit, told PBS' NewsHour that, while it's indeed better to experience the mirrored rooms without a smartphone, Kusama “also intended the work to be part of a communal experience," whether it's in-person or online. So the idea of sharing the experience is part and parcel with the works. Yoshitake added that social media “triggers the infinite repetition of an image of oneself that has been so central to [Kusama’s] practice as an artist.”

Whatever your take on the matter, it's likely you feel the urge to take at least one selfie while you're there, if for nothing else than to prove that you're totally with it, just like everyone else. Here are some simple tips to consider if you're venturing out to Kusama's kaleidoscope dreamscapes for pictures. Take note that you only have 30 seconds to spend in each room, so it's best to go in with a plan.

Upon entering certain rooms (there are a total of six mirrored rooms in the exhibit), you walk down a kind of narrow plank that leads to the opposite wall, which is mirrored. This strip ends a few feet from that wall, so you don’t actually get to go up to the mirror.

This leads us to one tip that Celia, one of the museum’s Visitor Services Associates (or V.S.A.s, or “Visas”), has for selfie-hungry visitors who want to get a glorious shot of their own face: turn around and face the door that shuts behind you (as the person above did). “People sometimes forget that you can get up to the mirror on the door, which can give you a better closeup,” she said. This advice is perhaps most applicable to "Phalli's Field," "Aftermath of Obliteration of Eternity," and "The Souls of Millions of Light Years Away."

Certainly, this would push your vanity levels to prohibitive heights. But hey, you waited forever in that online queue to get here—you’re the star and get to do whatever you want.

2. When it's actually good to put yourself in a corner.

“Dots Obsession - Love Transformed Into Dots" may be the trickiest room to master. This is because the floating pink balloons (that are splashed with dots) are placed at semi-random locations—while some of the balloons appear to line-up, others are stationed in more (seemingly) arbitrary places. All this means that the patterns made by the mirrors aren’t quite as clean and stark as they are in other rooms. The best shot, then, is one in which the balloons look as if they’ve run completely amok, scattering all over the place like billiard balls and covering up as much dead space as possible. This shot is best achieved by directing your camera at the corners of the room. Luckily, there’s one right by the entrance (above).

3. Don't wait for the right moment.

You might not know it from the static shots you see on Instagram, but several of the rooms are pretty dynamic in terms of color and brightness. This is especially true for “The Souls of Millions of Light Years Away” and “Love Forever.” The former room explodes into a mini light show (see above) and the latter switches color schemes, going from the cool shades of a deep blue to the gaudy tones of a Vegas marquee. As such, it’s hard to pinpoint when, exactly, is the best time to take your shot. The best approach is to go in knowing what angle shot you want (we cover more of this later on) and snap as many photos as you possibly can, with hopes that you land on the right lighting and/or combination of colors. Again, “The Souls of Millions of Light Years Away” will only afford you 30 seconds of visitation time, so it's imperative that you just snap away with your camera, rather than waiting for the perfect moment.

Likely, your immediate impulse is to do a dead-center shot where you’re the locus of attention (isn’t that what a selfie’s for, anyway?). But doing so would be to miss out on some of the neat, rakish angle shots that some of the rooms can afford you. This is especially true for “Love Forever” and “Aftermath of Obliteration of Eternity.” In “Love Forever” (which is a small little chamber that you look into via a small window) the space is so compressed and fabulously lit that even the slightest tilt of the camera can make for a more dynamic shot. So, get up close to that little window, stick your mug and camera in there, and aim somewhere between 10 and 11 o’clock (or 1 and 2 o'clock). Your face/camera will appear slightly to the side, and you may also get a shot of some stranger’s face peering through another window, but the lights take on a more daring angle. 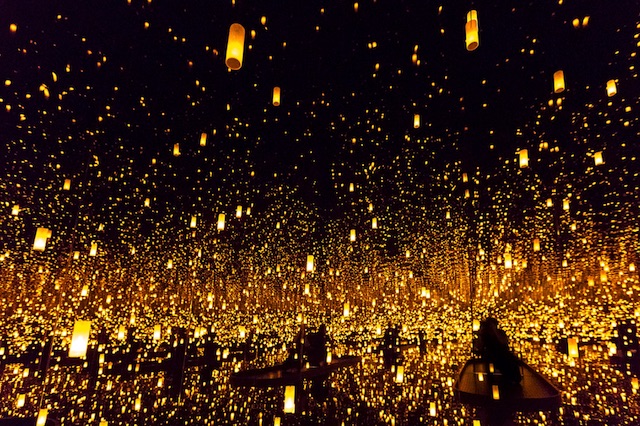 In “Aftermath of Obliteration of Eternity,” you may also want to try the above shot done by our photographer Brian Feinzimer. Get on one knee and aim at the upper left or right corner, so that it seems that the flickering lanterns are whizzing by overhead. Sure, your face may get obscured in darkness, but at least you'll have a shot that runs against the grain.

And now for a little bit of infinity room mind blowing.

As suggested by its name, ”Phalli's Field” is covered with a bed of spotted, phallic objects. The effect (of far-reaching fields of spotted curiosities) is broken by the pathway that runs down the center of the room. As such, the best way to get an uninterrupted shot of the “field” is by sitting down and getting a low shot.

PSA time: When you sit down, watch your step and make sure you don’t drop anything or fall over. That apparently happened in D.C., when someone visiting “All the Eternal Love I Have For The Pumpkins" dropped their phone and smashed a gourd. An earlier version of this guide included “Pumpkins.” But we’re now informed that cameras and phones are prohibited from this room. People are apparently somehow sneaking cameras in and taking pictures (as evidenced on Instagram): we advise that you be respectful and follow the rules provided by the V.S.A.s.