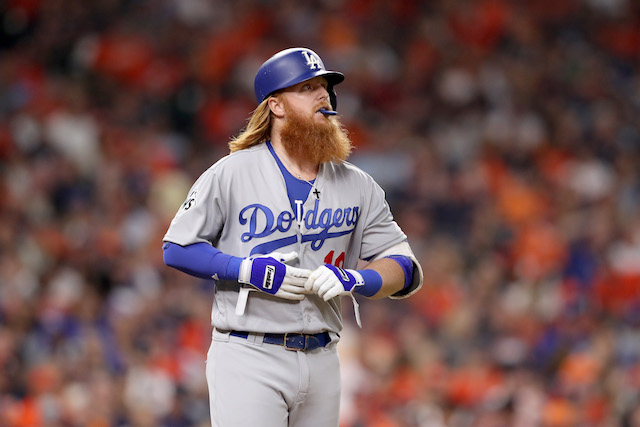 At least you can still wear your Justin Turner beard. (Photo by Christian Petersen/Getty Images)

Game 6 of the World Series coincides with Halloween night this year, an occurrence as rare and magical as that time Chanukah fell on Thanksgiving and you got to get all your familial holiday obligations out of the way in one fell swoop. Not everyone at Dodger Stadium is getting into the spooky spirit, though; the LAPD let Dodgers fans know via Twitter that "masks and toy weapons" will be barred from the stadium during Tuesday's game.

Fans will not be allowed into #Dodgers stadium with any type of #Halloween mask or toy weapon https://t.co/Lp2njOmFPE

"Family-friendly" costumes are allowed at Dodger Stadium tonight, but masks or any other face-covering accessories are banned, the L.A. Daily News reports. "Brooms, poles, sticks, umbrellas, baseball bats and weapons of any kind" are also off-limits, as are noisemakers, banners and signs. Face paint is a go: we repeat, face paint is a go.

As tempting as it is to dismiss the Dodgers higher-ups as Halloween grinches, that "no weapons" thing definitely makes sense; and hey, maybe fans' cheers for the Dodgers as they face off against the Houston Astros will be less muffled without the presence of those Jason Voorhees hockey masks from Friday the 13th that every lazy adult male has donned on Halloween since time immemorial.

Take heart, Dodgers fans; the cops may be able to ban your sick-ass catcher's masks and "#ThisTeam" signs, but they can't stop you from slapping on a scarlet Justin Turner beard or gathering your long, flowing blond locks into a haphazard ponytail and going as Clayton Kershaw.