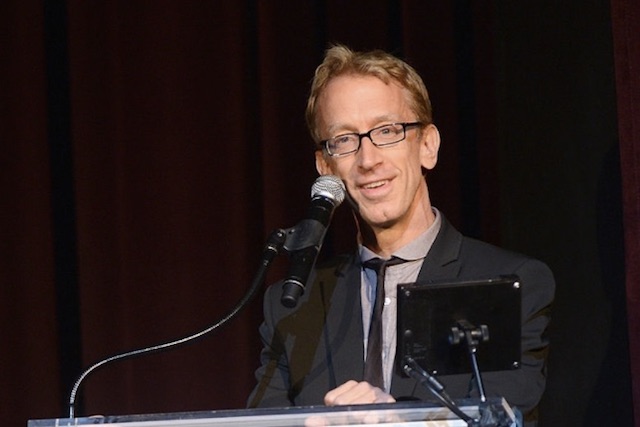 Actor and comedian Andy Dick has been dropped from his role in an upcoming independent film after multiple people accused him of sexual harassment on set, according to The Hollywood Reporter. THR quotes two sources who worked on the independent film, Raising Buchanan, and characterized Dick's alleged sexual misconduct as "groping people’s genitals, unwanted kissing/licking and sexual propositions of at least four members of the production."

In a phone interview with THR on Monday, Dick confirmed he'd been dropped from his supporting role in Raising Buchanan and that he propositioned colleagues, but denied that he groped anyone on set, saying,


"I didn't grope anybody. I might have kissed somebody on the cheek to say goodbye and then licked them. That's my thing — I licked Carrie Fisher at a roast. It's me being funny. I'm not trying to sexually harass people."

Dick told THR his alleged sexual misconduct on set was partially due to a medication mix-up. He also invoked a similar "different time" defense to the one offered by Harvey Weinstein:


"I don't know the difference between sexual harassment and trying to get a date. In the '70s, all the girlfriends I got was by kissing and licking their cheek. I don't know anymore," he said. "There were beautiful women and beautiful guys on the set. I flirt with them. I might kiss someone on the set and ask them to go to dinner. They are the ones that took it south."

Dick insisted to THR, "Of course I'm going to proposition people. I'm single, depressed, lonely and trying to get a date. They can just say no, and they probably did and then I was done," and finally conceded, "I won't lick anyone's face anymore. We have an agreement."

This isn't the first time Dick has been accused of sexual misconduct; the 51-year-old actor, who has struggled with addiction throughout his career, was arrested on drug and sexual battery charges in 2008 after allegedly groping a 17-year-old girl in Riverside County. Dick was arrested again in 2011 for reportedly lewd behavior and property damage after allegedly exposing himself and urinating at the Newport Beach Film Festival.