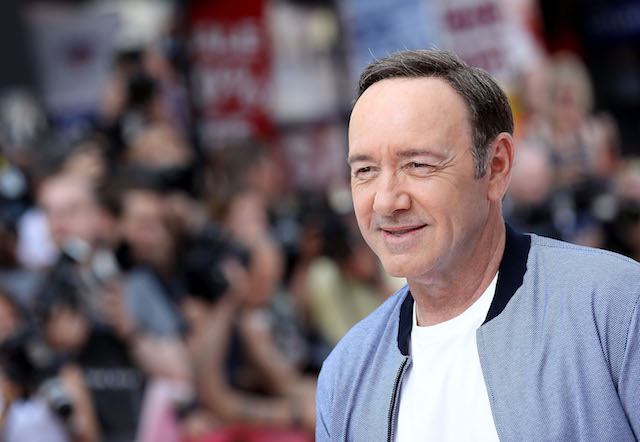 Spacey at the European premiere of "Baby Driver" in 2017. (Photo by Tim P. Whitby/Getty Images for Sony Pictures)

Actor Anthony Rapp came forward on Sunday to tell the story of how House of Cards star Kevin Spacey allegedly made a sexual advance toward him when Rapp was 14 years old. Later on Sunday, Spacey made a statement of apology on Twitter, saying he did not recall "what would have been deeply inappropriate drunken behavior" against Rapp and quickly segueing into his own coming-out story:

This story has encouraged me to address other things about my life. I know that there are stories out there about me and that some have been fueled by the fact that I have been so protective of my privacy. As those closest to me know, in my life I have had relationships with both men and women. I have loved and had romantic encounters with men throughout my life, and I choose now to live as a gay man. I want to deal with this honestly and openly and that starts with examining my own behavior.

Rumors about Spacey's sexuality have indeed swirled for years, but so have rumors about his allegedly sexually predatory behavior; in 2015, Gawker published an article titled "People Keep Telling Us About Kevin Spacey's Aggressive Love For Men," in which several young men were quoted saying Spacey had sexually pursued them and, in some instances, harassed them. (For those keeping score, Gawker also wrote about Harvey Weinstein in 2015 and James Toback in 2010.)

GLAAD president Sarah Kate Ellis condemned Spacey's statement on Monday, writing on Twitter, "Coming out stories should not be used to deflect from allegations of sexual assault." LGBTQ celebrities including Zachary Quinto and Wanda Sykes also took to Twitter to share their disapproval for Spacey's statement:

No no no no no! You do not get to “choose” to hide under the rainbow! Kick rocks! https://t.co/xJDGAxDjxz

Kevin Spacey has just invented something that has never existed before: a bad time to come out.

The timing of this announcement has raised some eyebrows, to be sure. https://t.co/C3laoxYKhA

Nope to Kevin Spacey's statement. Nope. There's no amount of drunk or closeted that excuses or explains away assaulting a 14-year-old child.

House of Cards creator Beau Willimon called Rapp's accusations against Spacey "deeply troubling," Variety reports. Willimon added that while working with Spacey on the Netflix drama, he "neither witnessed nor was aware of any inappropriate behavior on set or off."