Here are 20 of our favorite events happening in L.A. this Halloween week.

PAN’S LABYRINTH (Screening + conversation)
The Academy presents a screening of Guillermo del Toro’s Pan’s Labyrinth (2006) as part of the “From Latin America to Hollywood” screening series on Monday at 7:30 p.m., followed by a conversation with the cast/crew of the film. Panelists include: producer Bertha Navarro, cinematographer Guillermo Navarro, and actors Doug Jones (“Fauno, Pale Man”) and Ivana Baquero (”Ofelia”). Tickets: $3-$5.

GAIL SIMMONS (Book talk + bites)
Top Chef’s Gail Simmons is at Esters Wine Shop & Bar on Monday night from 7-9 p.m. for a cocktail party to celebrate her newest cookbook, Bringing It Home. The $95 event ticket includes a variety of bites inspired by the cookbook, prosecco and a signed copy of Simmons’ book.

TINDER LIVE (Comedy)
Dating is hard, but to help alleviate the pressure with a few laughs along the way is Tinder Live with Lane Moore, which stops at NerdMelt on Monday night at 8:30 p.m.. The interactive game/dating/advice show explores the crazy world of Tinder with helpful tips and tricks, real-time swiping and messaging. Who knows what may happen…Special guests Caitlin Stasey and Matt Braunger. Tickets: $10. 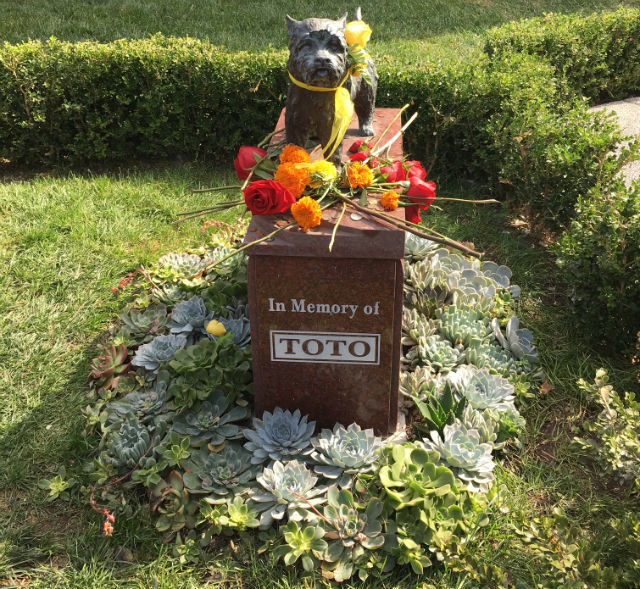 HOLLYWOOD FOREVER CEMETERY WALKING TOUR (History)
Just before the Halloween festivities begin, film historian Karie Bible leads guests on the official walking tour of Hollywood Forever—aka “The Cemetery of the Stars”—on Tuesday at noon. She leads guests through the cemetery, pointing out graves of some of Hollywood's most famous, including Cecil B. Demille, Marion Davies, Tyrone Power, Rudolph Valentino, Carl "Alfalfa" Switzer, Judy Garland and others. She also discusses forgotten scandals of the era and sheds light on the history of the cemetery and its residents. Tours are $20 per person and lasts approximately 2-1/2 hours long. No advance reservations required. There are several other tours later this month (mostly Saturdays and Sundays) including this Saturday (Nov. 4) at 10 a.m.

WEST HALLOWEEN CARNAVAL (Party)
West Hollywood’s Halloween Carnaval takes over Santa Monica Boulevard between North Doheny Drive and La Cienega Boulevard on Monday from 6-11 p.m. Keep the kids and pets at home for this free party because things tend to get a little bit naughty. After the live entertainment and people watching along the boulevard are done, the bars along Santa Monica Boulevard and in WeHo keep the party going well into the night. No backpacks, camera bags or totes allowed. Visitors are asked to carry items in clear plastic bags this year.

JOHN CARPENTER (Music)
Film director John Carpenter, who often scores his own films, plays the Palladium on Tuesday. His Anthology Tour features the Halloween score—perfect for the season—as well as other soundtracks. 7 p.m. Tickets start at $45.

PHANTOM OF THE OPERA (Music + film)
For Halloween, the LA Phil screens The Phantom of the Opera (1925) at Walt Disney Concert Hall at 8 p.m. The silent film is accompanied by Clark Wilson on organ. There’s a pre-concert talk with Wilson and KUSC’s Alan Chapman at 7 p.m. Tickets start at $37.

ZED FEST (Film)
The 8th annual Zed Fest Film Festival opens on Halloween at Laemmle Noho 7. The Zed Fest and screenplay competition supports and promotes independent filmmakers, who work in the horror, suspense, science fiction, drama,action, adventure and art house genres. Highlights include the festival’s opening with Todd Tucker’s The Terror of Hallow's Eve at 7 p.m. and a Zed Fest Film Festival Women in Film Panel from 7-9 p.m. on Thursday. Tickets: $11 per film block or $100 for festival pass.

DISOBEY (Anton LaVey exhibition)
Disobey is an Anton LaVey exhibit produced by Lethal Amounts gallery that happens on Halloween night at Black Rabbit Rose/Madame Siam’s in Hollywood. The event honors the oculist, showman and Church of Satan founder and his legacy of challenging societal norms with theatrics and flare. On view are photographs, original art by LaVey, original books, writings, personal items, artifacts from the Black House, ephemera and more. The night includes lectures from long-time collaborator and noted film director Kenneth Anger for VIP ticket purchasers, a Black Mass performed at midnight by former high priest of the Church of Satan. Matt Skiba DJs a set, too. Tickets: $50-$100.

DAWN OF THE DEAD (Halloween screening)
On Tuesday at 7:30 p.m. the Hammer Museum screens George Romero’s classic film, Dawn of the Dead (1978). From the Hammer: “Like Night of the Living Dead before it, Dawn helped shape the zombie genre and tapped into the zeitgeist of its historical moment with a deft combination of blood, tension, and social satire.” Free.

AN INTIMATE EVENING WITH TODD GLASS (Comedy)
The progressive comic Todd Glass brings his show, An Intimate Evening with Todd Glass, to the Hollywood Improv (Lab) beginning Wednesday at 9:30 p.m. (Nov. 1-5, and Nov. 10). He’s mixing jazz and comedy as he’ll be backed by the Todd Glass Band during the run and may have a few surprises guests to open each show. Tickets: $10.

WEEZER (Live in-store set)
Weezer is back. And the guys are doing an acoustic in-store at Amoeba in support of the band’s new record Pacific Daydream on Wednesday at 6 p.m. To attend, you must have purchased the new CD from Amoeba. Space is limited to store capacity.

INTERNET EXPLORER: A COMEDY GAME SHOW (Comedy)
Comedian Joe Kwaczala presents Internet Explorer: A Comedy Game Show to the Comedy Central Stage in Hollywood on Thursday at 8 p.m. Kwaczala finds a bunch of weird crap online and then tests contestants' (from the audience) abilities to make sense of it all in a live comedy game show. There will be prizes and special guests, including actress/writer Mara Wilson, voice actor Maurice LaMarche and comedian/author Greg Behrendt. The show is free, but reserve your seats either online or by calling 323.960.5519.

JOHN GREEN (Book talk)
On Thursday at the Alex Theatre in Glendale, bestselling author John Green and his brother Hank Green stop in to support of John’s new novel, Turtles All the Way Down. During this multimedia event, the brothers discuss the book, answer audience questions, perform live music and more. Tickets: $36, and includes a copy of an autographed copy of Turtles All the Way Down. 7 p.m.