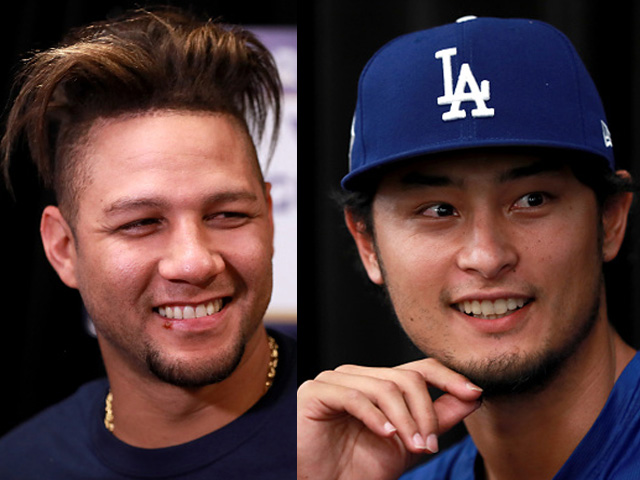 Updated 2:36 p.m.: Yuli Gurriel has been suspended for five regular season games in 2018 after making a racist joke in the direction of Dodgers' pitcher Yu Darvish Friday night. He will continue to play in this year's World Series. "There is no excuse or explanation that makes that type of behavior acceptable," baseball commissioner Rob Manfred said in a press conference on Saturday. He chose to punish Gurriel starting in 2018 so as not to punish the rest of the Astros. "I wanted the burden of this discipline to fall primarily on the wrongdoer," he said in the press conference.

Gurriel will be suspended without pay. The Astros will donate his salary for the five games "in equal parts to the Astros Foundation and to a charity directly supporting diversity effort," according to CBS.

The Houston Astros' first baseman Yuli Gurriel is under fire for making an apparent racist joke directed at Dodgers' pitcher Yu Darvish during Game Three of the World Series Friday night in Houston. After hitting a home run during the second inning, Gurriel squinted his eyes in a way seen as mocking Darvish's Asian heritage. He also used the term "chinito," which is derogatory Spanish term that roughly translates to "little Chinese boy" (Gurriel is Cuban). Darvish is not Chinese; he was born in Japan to a Japanese mother and Iranian father.

Gurriel and the Astros had to confront the blowback from Gurriel's actions after the game, which the Astros won 5-3. “I just feel bad,” Gurriel said, according to the NY Times. He spoke through an interpreter, adding, “[i]f anybody got offended over there, it was not my intention.” He also elaborated on the choice to use derogatory language. "In Cuba and in other places, we call all Asian people Chinese," he said, according to MLB.com. "But I played in Japan and I know [that is] offensive, so I apologize for that," he added.

Darvish responded as well, taking to Twitter to ask everyone to focus on moving forward from the incident.

An MLB spokesperson responded via ESPN, saying "[w]e are aware of the situation and the Commissioner intends to speak with the player tomorrow." The Astros' manager A.J. Hinch described Gurriel as "remorseful," according to the L.A. Times.