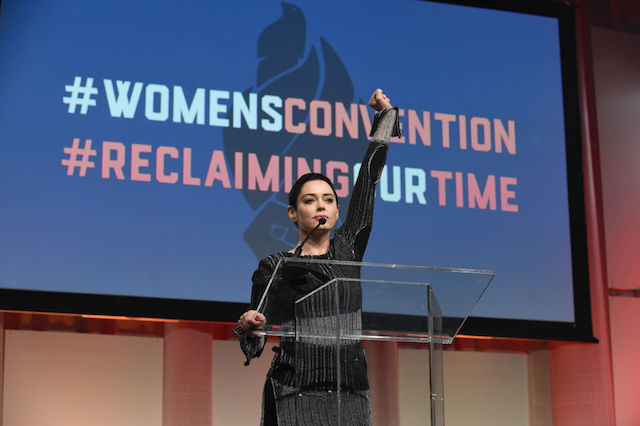 Rose McGowan on stage at the Women's Convention. (Photo by Aaron Thornton/Getty Images)

Rose McGowan took to the stage at the Women's Convention in Detroit Friday morning in her first public appearance since speaking out against Harvey Weinstein. In her speech, she calls attention to the universality of experiencing sexual assault, quoting Tamara Cofman Wittes' #MeToo campaign. She also announced a website called Rosearmy.com where people can "enlist" to join together in speaking up against sexual violence.

McGowan has emerged as a prominent figure in the wake of the NY Times' and New Yorker's bombshell reports on Harvey Weinstein's history of alleged sexual harassment and sexual assault. She is named as one of his alleged victims, and began to take to Twitter to speak up against the entertainment industry's repeated patterns of sexism and assault. In one of her tweets, she wrote:

1) @jeffbezos I told the head of your studio that HW raped me. Over & over I said it. He said it hadn’t been proven. I said I was the proof.

In her speech at the Women's Convention, McGowan turned her attention outward, saying, "what happened to me behind the scenes happens to all of us in this society and that cannot stand and it will not stand.” She added, "we've been waiting a very long time for this to happen, but we don't have to wait anymore." She goes on to explain how Hollywood and movies often take the role of trying to reflect reality to the people who watch it; she cites how the Director's Guild of America is comprised of 96% men, and how this inevitably leads to "one view" coming out of the entertainment industry. "That view should not be in your mind," she said.

While McGowan's voice has gained prominence in the wake of the Weinstein scandal, it has not come with her own share of criticism. At one point she tweeted an analogy equating the use of the n-word against black Americans and the sexist vitriol women experience regularly. This led many to criticize McGowan's comparison, citing it as an example of "white feminism" (a criticism levied against women who believe the pains of white, economically-privileged women is on par or worse than the pains of people of color or lower-income Americans). McGowan has since deleted the tweet and offered one excuse and one apology instead.

Note to self: do not smoke a J late at night and make weird analogies pic.twitter.com/DzCTGz9YtT

And, please, to anyone POC I offended with my stupidity lapse, know that I am profoundly sorry. I hear you.

McGowan did not address these comparisons or criticisms in her Women's Convention speech. "It's time to clean house," she said at the end of her speech, before raising her fist in the air.