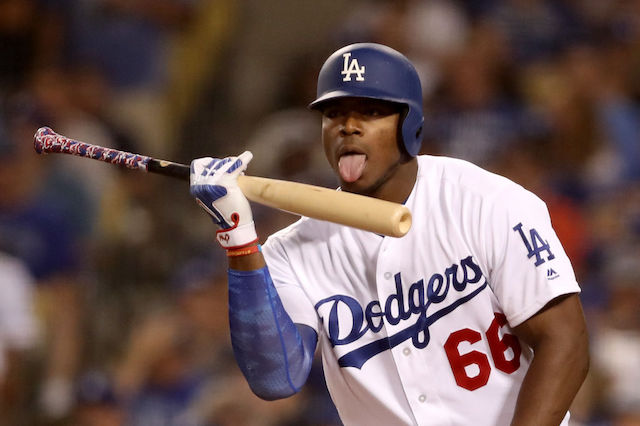 Yasiel Puig during Game 2 of the World Series. (Photo by Christian Petersen/Getty Images)

Let's start with some basic facts:

1. The Dodgers are playing in the World Series against the Houston Astros and, as difficult as it is to admit, there is a possibility the Dodgers will lose.
2. Yasiel Puig is the best Dodger.
3. Puig's social media presence, photo-ops, and personality transcend Time and Space, imbuing all fans with joy and the rush of spiritual serenity.

Therefore, as is logical, Puig will save us from heartbreak if the Dodgers do lose. Also, if the Dodgers win, it will only increase Puig's magic. It's a win-win situation. To celebrate this convenient fact, we've gathered some of our favorite, recent Puig moments on social.

First off: Puig understands that social media is meant for pictures of yourself (for those of you too scared: don't fear the selfie). He understands it so much that he recently made an Instagram album of six (!!!) photos of himself featuring various poses, garb, and feelings.

Ready for next round

He also knows how to poke fun at himself.

I still don’t know why my bats are so slippery 😝😝😝😇 pic.twitter.com/uHVT2d9gke

He has created an iconic pose—sticking out his tongue—and frequently uses the :stuck_out_tongue_closed_eyes: emoji as a simulacrum of his own self. It is neither cloying, self-aggrandizing, or forced: it is perfect.

He also can dance, and for that, we are thankful.

He also knows how to tell a story. When the eclipse occurred back in August, Puig showed off his spectacles, looked to the sky, *and* provided two photos of the phases of the eclipse. This is breaking down cinema and storytelling to its most basic parts; Puig clearly has a remarkable understanding of narrative.

He'll even sacrifice his own good looks to support a teammate.

Lest you forget he also has a huge heart, Puig runs a foundation that has been raising money and accepting donations for cities ravaged by Hurricanes Irma, Harvey, and Maria.

Also, he dunked on Keith Olbermann, who took offense with Puig's bat-flipping:

Hey @KeithOlbermann I flip on singles and doubles & not on homers. Come watch the show. Need a ticket? I got you #PuigYourFriendToo 🙃 https://t.co/7Ror8AyGRg

He embraces femininity, because gender is no binary in Puig's world.

And he truly, truly loves his kids.

This is my real world. The rest is fun & games 💙 #Balance 🙏🏽 pic.twitter.com/179uepWaYI

So regardless of the World Series outcome, Puig's light will shine bright. And it appears he hasn't lost his spark down in Houston.