Pomona Officers Charged With Covering Up Beating Of Teenager At L.A. County Fair 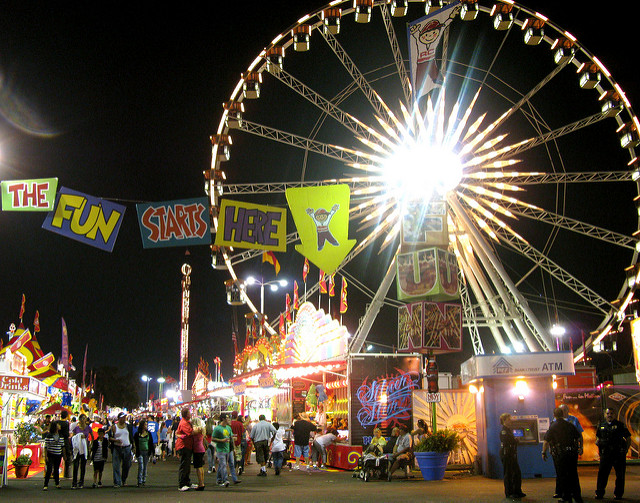 (Photo by victoriabernal via the LAist Featured Photos pool on Flickr)

Federal prosecutors have charged three Pomona police officers with attempting to cover up the 2015 beating of a teenager at the L.A. County Fair, the U.S. Department of Justice announced Thursday.

The incident, which was captured on video (reproduced and uploaded on YouTube here), shows an officer grabbing a male from behind and spinning him around. The officer then throws two punches at the male before a group of three other officers come in to help tackle the male to the ground. One of the officers appears to swing a baton at the male’s legs.

The male has been identified as Christian Aguilar; while he is not named in court papers because he is a minor, he and his family have spoken out about the incident before.

According to the DOJ, Pomona Police Department Corporal Chad Kenneth Jensen, 50, was charged Thursday with deprivation of rights under color of law for allegedly beating the minor victim. An indictment said that Jensen violated the victim’s constitutional rights, which include the right to be free from the use of unreasonable and unnecessary force, adding that the assault led to bodily injury.

Jensen and his partner Prince Taylor Hutchinson, 31, were both charged in preparing falsified reports. The indictment says that Jensen wrote in a report that the male had attempted to punch Jensen in the face—while the video doesn’t show what had preceded the moment that was captured, it doesn’t appear that the Aguilar had hit back at the officer during the altercation. The indictment adds that, in separate falsified reports, Jensen and Hutchinson said that Aguilar had come within “arm’s reach” of another officer who was escorting another person who’d been placed under arrest, apparently in an attempt to “incite unrest among at the crowd,” according to the DOJ.

PPD Sergeant Michael Timothy Neaderbaomer, 49, is charged with obstruction of justice for allegedly trying to “intimidate and corruptly persuade” Aguilar and his family from reporting the incident. Prosecutors say that Neaderbaomer told Aguilar’s mother that they had a video showing her son trying to hit Jensen, and that Aguilar would have to meet with officials alone if he wanted to file a complaint (this claim is false and a violation of PPD policy). Neaderbaomer is also charged with lying to FBI agents, as he’d allegedly told them that he’d never had that exchange with Aguilar’s mother, according to the L.A. Times.

As stated at NBC 4, the allegations stem from an incident where Aguilar’s father—Ignacio— was detained at the Fair on suspicion of public intoxication. Aguilar followed the officer and his father and began filming them with his camera phone. The Times reports that a cousin of Aguilar’s was also detained. Aguilar’s lawyer told the Times that Aguilar was standing 10 to 15 feet away from them, and not the “arm’s reach” that Jensen had allegedly described in his report.

Michael Schwartz, an attorney representing Jensen, told the Times that the video of the incident shows “a small window into the entire event.”

According to a statement released by PPD Police Chief Paul J. Capraro, all three officers remain on administrative leave. “The Pomona Police Department will continue to fully cooperate with the US DOJ, as it had since the beginning of their investigation,” said Capraro.

A trial has been scheduled for December 19.

Aguilar and his family filed a lawsuit against Pomona police in 2016; the city later paid $500,000 as part of a settlement, according to the Associated Press.