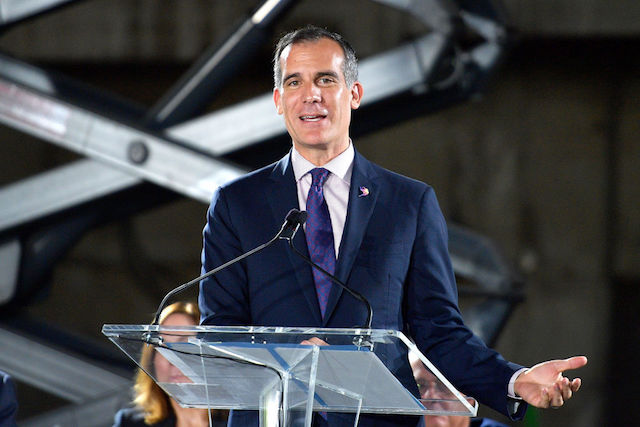 As expected, L.A. Mayor Eric Garcetti is now enmeshed in a friendly wager with Houston Mayor Sylvester Turner over the World Series. In the deal, Turner would foot the bill for some Texas barbecue if the Houston Astros win. In the case the Dodgers lose, Garcetti would be on the hook for a “uniquely L.A. meal”:

If the @Astros win the series, we will send over a uniquely L.A. meal from our friends at @KogiBBQ & @GoldenRoadBrew.

Craft beer lovers quickly chimed in on the tweet, saying that Golden Road doesn’t quite fit into the framework of a uniquely L.A. experience. While Golden Road Brewing has its roots in L.A., it was sold to the beverage giant Anheuser-Busch in 2015. The move prompted local craft beer drinkers to muse that the brewery was "built to sell," and not cultivated to fit into the fabric of the burgeoning beer scene in Southern California.

The response to Garcetti’s wager was swift and many, with messages coming from the non-profit L.A. County Brewers Guild (which represents 69 independent breweries here in L.A.), as well as the local breweries themselves:

Happy to help, @MayorOfLA! We have 69 independent breweries who are not owned by AB-InBev. Let's #shopsmall #drinklocal!

@Labrewers has shown the world that we can brew with the best #Drinklocal #supportlocal https://t.co/UIGnxYkueU

As an #independentbrewery in LA, we'd be happy to supply some #LAbeer for this wager

Us and all of our 68 friends would be happy to offer you some independent beer! Choose @LABrewers!

Frances Lopez, executive director for the L.A. County Brewers Guild, told LAist that the issue isn’t about a battle of breweries, but about bolstering a community of businesses in Los Angeles. “It’s about keeping small businesses and jobs here in L.A.,” said Lopez. “There’s a budding community here that should be supported. Back in 2009 we had less than 10 independent breweries, but now there’s about 70.”

Lopez also touched on the “uniquely L.A.” angle that was framed by the mayor. “Kogi’s great and Roy Choi is one of the faces of Los Angeles. So it doesn’t make sense to pair Kogi with Golden Road,” said Lopez. “That’s like pairing one of our local breweries with Chipotle in the wager.” What’s more, Golden Road is already available in several grocery stores in Houston, so their beer isn’t exactly unknown in Texas.

Speaking on the beer debate, Garcetti spokesman Alex Comisar told the L.A. Times that the mayor “is proud to support local businesses that create jobs in our city and tell L.A.’s unique story.” The Times notes that Anheuser-Busch has given $85,000 to the Mayor’s Fund for Los Angeles, a nonprofit of Garcetti’s, since 2015. Lopez told the Times that some locally owned breweries have also supported the mayor in the past.

Will the mayor change his tune on Golden Road? Perhaps. While Lopez says that the Guild has yet to speak directly with the mayor on the topic, it seems that Garcetti (or his handlers) reached out to local brewer Scholb Brewery through his personal Instagram account (not his mayor account). “We're including locally owned beer as well” in the wager, said Garcetti’s account in the comments section:

LA Mayor @ericgarcetti has made a wager with Houston Mayor @sylvesterturner that the @Dodgers will win the #WorldSeries. If we lose he has to send a uniquely #LA meal to Houston featuring @kogibbq and @goldroadbrew. The @labrewers would like to happily help send any of the beers from one of LA's 69 #independant breweries who are not owned by AB-InBev. We say go for it @frannyfullpint! Find a link to any of the brewers guild breweries in our bio! #LABeer #DrinkScholb #IndependentBeer

We reached out to the mayor’s office but have yet to hear back at time of publication.

Related: A Running List Of L.A./Houston Wagers Taking Place For The World Series