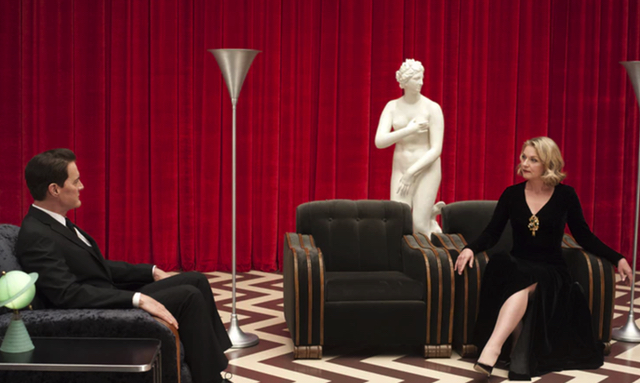 Twenty-six years after the presumed final season, fans of Twin Peaks were treated to a fantastic third season that aired this past summer. And it looks like we might not have to wait another 26 years for season four. Mark Frost told Indiewire that a fourth season is "an open question and it’s one that we’re looking at."

David Lynch previously hinted at the idea in front of a television audience in Serbia back in September. He did say it would take awhile, though, but hopefully not as long as the last hiatus. “It took me four and a half years to write and film this season,” he said, hinting at the long development process that goes into any season of television.

Mark Frost is David Lynch's co-creator on the show. In the interview with Indiewire, he also mentioned where the inspiration for the third season came from. Frost and Lynch revisited the final episode of season two, when the spirit of Laura Palmer tells Agent Cooper "I will see you again in 25 years."

"That was the springboard to the story and that is where I saw the opening to bring us back and that is what I proposed to David when we got back together in 2012 and said this is where we can pick up the thread," Frost told Indiewire.

Frost said Showtime is thinking about a fourth season as well. So if it does happen, it's safe to assume it'll end up back on the same network. Will we finally know what happened to Audrey Horne? Or who Richard and Linda are?

A Twin Peaks-themed pop-up just finished up its run selling costumes and pie on Melrose Avenue, so it's clear the audience desire for a fourth season is there.