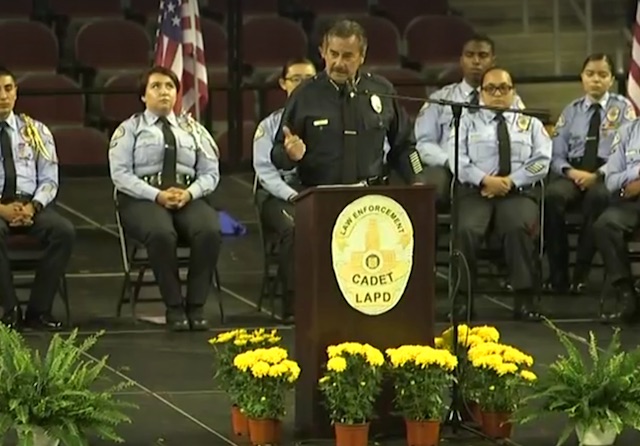 A teenager involved in a scandal that rocked the Los Angeles Police Department’s cadet program over the summer plans to file a claim against the city, saying she’d suffered sexual abuse at the hands of a former LAPD officer, reports the L.A. Times.

Details of the scandal first emerged in mid-June, when three teenage police cadets led officers on a vehicle chase through South L.A. while driving stolen police cruisers. An investigation into the incident revealed that those cadets, as well as several others, were stealing equipment from storage rooms at division stations. Police said they also uncovered text messages that led them to believe that Robert Cain, an officer who worked at the storage room at the 77th Street Community Police Station, was having a sexual relationship with a 15-year-old. Cain was personally arrested by Police Chief Charlie Beck at the station. Cain was later charged with two counts each of oral copulation of a person under the age of 16, lewd acts upon a child, and unlawful sexual intercourse, according to the L.A. County District Attorney’s office. He was also later charged with 10 felony weapons offenses after police found more than 100 weapons at his Rancho Cucamonga home in June, reports KTLA.

Attorney Luis Carrillo, who represents the unnamed 15-year-old in the claim, told the Times that officers at 77th Street Division knew about the cadets’ improper use of station equipment, but didn’t take steps to stop it. The claim says that Cain spent months cultivating a relationship with the teenager.

Sources told the Times in an earlier article that the sexual abuse took place on June 14; Cain had allegedly picked up the teenager from her South L.A. home and took her to Six Flags Magic Mountain that day.

The LAPD declined to provide comment regarding the claim.

The scandal led to, among other things, a suspension of the cadet programs at the 77th Street Division and Pacific Division, an update to the manual used by the cadet program, and an investigation conducted by the Inspector General’s Office. The Inspector General’s report found that the “kitrooms” at many division stations were loosely managed, and few of them conducted regular tallies of their vehicle inventory. The report also said that the supervisors charged with watching over the cadets had “no specific mandatory training,” leading to them “improvise to run their programs.”