Historic 1920s Sign In Echo Park To Be Relit At Ceremony 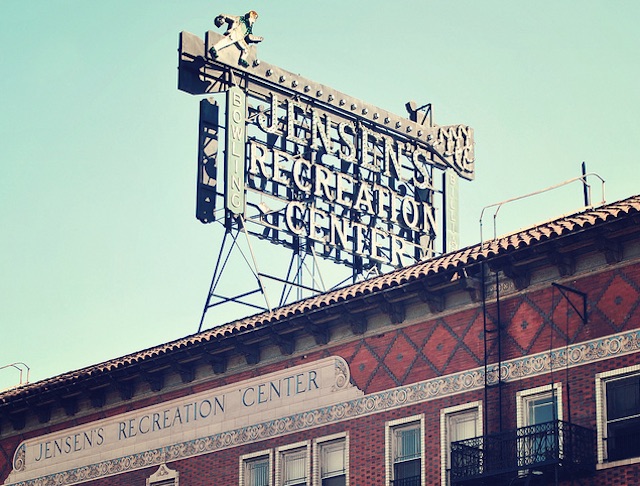 The sign in Echo Park. (Photo by Carrie McGann via the LAist Featured Photos pool on Flickr)

Echo Park has some very popular monuments, from the lake itself to Taix Restaurant, but one monument has remained neglected: the Jensen's Recreation Center sign that sits over the 1700 block of Sunset Boulevard. The 1920s era sign has been dark for years, but thanks to fundraising efforts and years of repair, the sign will be turned on once again.

Starting at 5 p.m. Friday, Councilman Mitch O'Farrell will be hosting an Echo Park block party to ring in the sign-lighting ceremony, which will occur at 6 p.m. It will include a live band, cars from the '20s, and a giant light-switch prop to make the scene even more dramatic.

The sign used to advertise a bowling alley that operated out of the building's basement. According to a statement by Councilman O'Farrell, it's one of the last "articulated incandescent sign of this type and size"—it's 17 by 28 feet large, and contains 1,300 red, green, and white light bulbs.

While the sign has been largely inoperable for the last several decades, it was relit briefly in 1997. The sign stopped working again after a few years and has remained dark ever since. Things started looking up in 2014 when Vista Investment Group bought the building and put a lot of money towards upgrades. This, combined with the local fundraising from the Echo Park Historical Society, allowed the sign to undergo full repair.