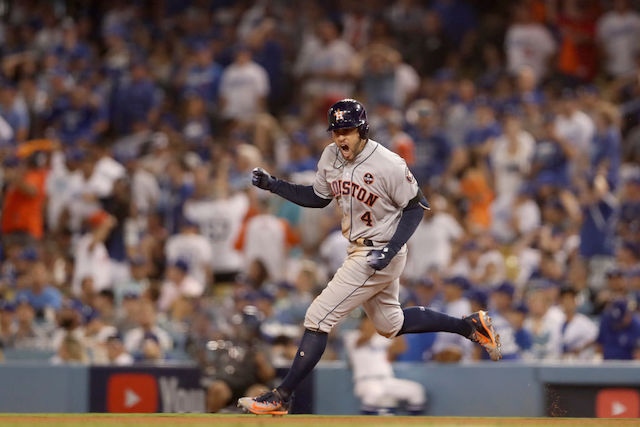 George Springer #4 of the Houston Astros runs the bases after hitting a two-run home run during the eleventh inning against the Los Angeles Dodgers in game two of the 2017 World Series at Dodger Stadium on October 25, 2017 in Los Angeles, California. (Photo by Christian Petersen/Getty Images)

There was a very long but apparently important baseball game on Wednesday night and we are sad to report that the Dodgers, the Los Angeles-based team, did not win.

Baseball is a game that basically consists of people hitting a ball and also running around a field while other people watch, either in person or on TV. There are actually teams that play this bat-and-ball game professionally (don't laugh, it generates $9 billion a year in revenue!), and every year the best two teams play against each other in something called the World Series, which is like an academic decathlon but for baseball.

This is the first time that Los Angeles' baseball team, the Dodgers, has been in the World Series since 1988. The World Series is not just one game but several, conducted in a best-of-seven style playoff (hence the word "Series" in the title). The Dodgers are competing against the Texas-based Houston Astros in this year's World Series, and the Dodgers won the first game on Tuesday. People take these World Series games very seriously, and some fans even pay tens of thousands of dollars for tickets. After the Dodgers' Game 2 defeat, the Series is now tied 1-1.

Wednesday's game was very long. The unit of play in baseball is something called an inning; there are supposed to be nine innings in a game and typically many Dodgers fans go home during the 7th inning to avoid traffic. This game, however, had 11 innings. The final score was 7-6, our loss.

The next game of the World Series will be on Friday at Minute Maid Park in Houston, Texas. C'mon, Dodgers, let's win this thing.