Traffic Around Dodger Stadium For Game 1 Was Really, Really Brutal 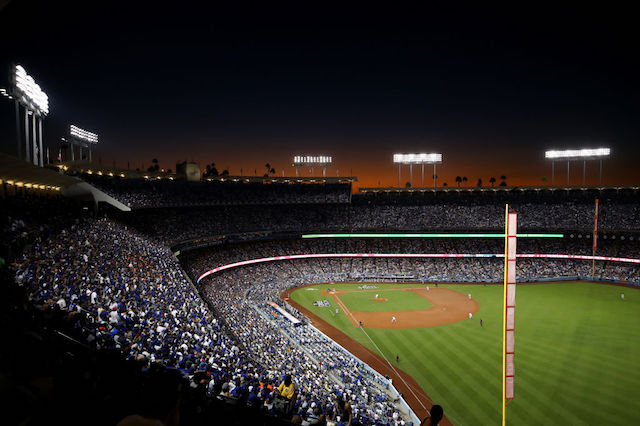 There are a number of certainties in Los Angeles, and one of them is that traffic going to and from a Dodgers game is going to be a total pain.

This time around, however, it may have been the worst that motorists have ever experienced. For any other game, fans may be pretty lenient about when they arrive at and leave the stadium. But Tuesday’s game was Game 1 of the World Series matchup between the Dodgers and the Houston Astros. The Dodgers haven’t been here since 1988, and this is the first World Series in a long while where both teams have 100-plus wins in the regular season. And did we mention that tickets were expensive? Which is all to say that people wanted to be there for every minute of the game. This led to a scenario in which more motorists operated on the same time frame, thus leading to massive gridlock.

This was best exemplified by an ABC 7 video that made the rounds on social media after the Dodgers beat the Astros:

Traffic near @Dodgers stadium after the win. Does it get anymore LA than this?! Lol #ThisTeam pic.twitter.com/0MwtHgmalj

USA Today reported that some people arrived at Dodger Stadium more than three hours before the game started. But even this wasn’t enough to alleviate the gridlock for others coming to the ballpark:

For those of you traveling to @Dodgers Stadium for #WorldSeries2017 we’ve prepared some extraordinary LA traffic to get you pumped! pic.twitter.com/7e3Q3wbiHO

Traffic going to the dodgers game in #la

And here’s the parking entrance, which perfectly embodies the feeling of so-close-yet-so-far-away:

Put a ✅ on that bucket list....attend a Dodgers World Series game!!!! Such an amazing atmosphere and does not compare to the nlds or nlcs. #kershaw pitched an amazing game and the bat @redturn2 is still on fire. @dodgers keep it going strong!!! #dodgers #losangeles #turner #ct3 #worldseries2017 #thisteam #chavezravine #vinscully #dodgerstadium

DODGER STADIUM almost in sight! Much more traffic here than in Westside! Geez! Parking is only 50 bucks! Not Bad (asses)!! #DODGERS pic.twitter.com/yzWZsdIjZY

And here’s a map confirming what we already knew:

Not everyone stayed till the last pitch, apparently (shame on you). But even an early departure wasn’t enough to escape the mass of cars:

May we suggest public transportation next time? Sure, it still requires ample amounts of waiting around, but the lack of road rage could do wonders for your blood pressure. Taking Metro from Union Station to Dodger Stadium is a cinch.