What You Need To Know About L.A.'s Red Flag Parking Restrictions If You Don't Want To Be Towed 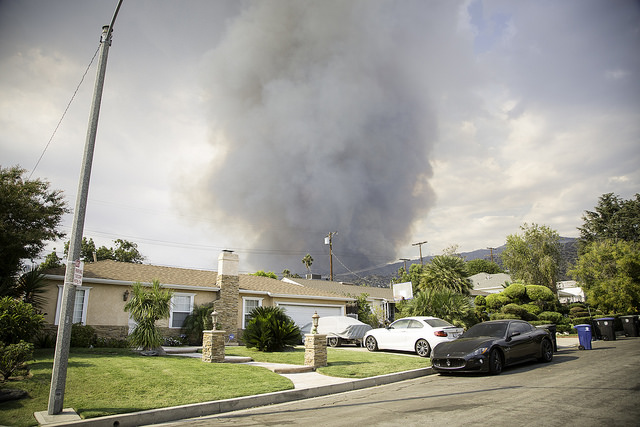 On Monday, a blistering heat wave in L.A. County broke a slew of temperature records. Out in Ventura County, a couple records were absolutely demolished, with Camarillo hitting 106 degrees and shattering the previous record by a full nine degrees, and Oxnard hitting 103 degrees and breaking the previous high by seven degrees.

Forecasts for Tuesday say that temps will be even higher (if only slightly), which means officials will be on the watch for fires around the county. In the City of L.A., this also means that several streets are subjected to parking restrictions:

Beginning at 8:00 AM today (10/24/2017), all vehicles parked illegally in posted locations within the Very High Fire Hazard Severity Zones will be towed by the City. The No Parking restrictions will remain in effect for at least 24 hrs. #RedFlagWarning pic.twitter.com/rLUZ73a1Vv

What’s a “Very High Fire Hazard Severity Zone”? For the most part, it refers to especially narrow streets in the city where it may be difficult to move a high amount of traffic through. Brian Humphrey, spokesperson with the Los Angeles Fire Department, told LAist that the aim of the restrictions is to aid in both evacuation and firefighting efforts. “Two things going on here. One, we want people to evacuate safely if there is danger. And two, we want to be able to get to the fires safely and quickly. We shouldn’t have to make it one way or the other,” said Humphrey, adding that the restrictions pertain to “very narrow streets”.

“Sometimes we’re driving out there and we see the fire engine scrapping by trees,” said Humphrey, giving us an idea of how tight these streets can be.

As for how you can check if you’re parking in one of the zones, the easiest way is simply to check the sign pole to see if there’s a warning. If you’re in one of the zones, there should be a sign with a tow truck on it, with text saying there’s no parking on red flag days. You can also look up an address at neighborhoodinfo.lacity.org to see if your street has restrictions; just enter your address (without the name of your neighborhood) and see if there’s a “yes” or “no” by “Red Flag Parking Zone” (a "yes" means you fall in that zone). We did a quick search ourselves and saw that stretches of Holly Drive in Hollywood Hills and Avenue 44 near Cypress Park fell under the parking restrictions. Certainly, it seems that most of the restrictions pertain to hilly areas with very narrows roads.

Another thing of note, the term “red flag” may be misleading because it’s used by different agencies. Humphrey notes that many people confuse the LAFD’s red flag warning with those issued by the National Weather Service. To determine if an LAFD red flag is in place (and therefore enacting the Very High Fire Hazard Severity Zones), you can check lafd.org/redflag for the current status. While the duration of each red flag lasts 24 hours, it may be renewed once that period is over, so you might want to check the website (or LAFD’s Twitter) in the next couple days to see what’s up.

And are there fires going on already? This morning alone, firefighters have had to put out a small blaze in Sylmar just south of the 210 Freeway, and one by Hansen Dam in Lake View Terrace, among others. Which is all to say that you should keep an eye out for smoke, and be on alert for hazards.