What L.A. Was Like The Last Time The Dodgers Were In The World Series

It's been 29 long years since the Los Angeles Dodgers were last in the World Series. As we Angelenos prepare for tonight's game, here's what the city looked like in 1988.

Former Angeleno Ronald Reagan was in the Oval Office and Tom Bradley was in the midst of his 20-year tenure as mayor of Los Angeles. Rail transit was "a hot topic" (though the first section of L.A.'s then-under construction downtown-to-North Hollywood Red Line subway system wouldn't open until 1993), and the average monthly rent for a vacant one-bedroom apartment was just shy of $600.

The 60th Academy Awards were hosted earlier that year by Chevy Chase (they were also the last Academy Awards held in April). Bernardo Bertolucci's The Last Emperor was nominated in nine categories and won them all. Alien invader movies, which "blasted off in the '50s, slumped in the '60s, and enjoyed a brief revival during the Steven Spielberg Regime (1977-1982)," were "back again," according to a late October 1988 story in the L.A. Times. 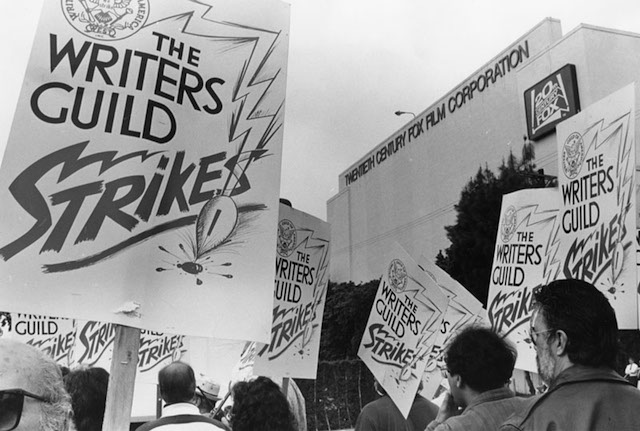 Picketers in support of the Writers Guild strike seen outside of the 20th Century Fox Studios in Century City on March 17, 1988.  (Photo courtesy of the Los Angeles Public Library Photo Collection)

The 1988 Writers Guild of America strike halted the industry town from March 7 to August 7 of that year. The strike, which remains the longest in guild history, "forced studio layoffs and crippled support businesses ranging from script-copying services to the elegant eateries where writers and producers cut their deals while doing lunch," according to the Times.

Hollywood was deeply unsettled—but not to such a degree that you could get a walk-in table at Morton's, as the L.A. Times detailed in a late June 1988 story:


The writer's strike may be in its fourth excruciating month but the power lunch is far from dead for Hollywood's deal makers. Dinner and breakfast aren't doing so bad, either. We called more than 30 industry insiders-agents, producers, writers and restaurateurs-and found that while some people are eating out less, it's still not possible to walk into L.A.'s elite restaurants without reservations and be immediately seated. "I'm sure some people have been affected but we're not your regular restaurant by the studio," said Pam Morton of Morton's.

Spago also remained full throughout the strike, according to the Times' story.

And long before TMZ, Nicky Blair's, Le Dome and Spago on the Sunset Strip were among the celebrity places to be in 1988, which is perhaps why the National Enquirer chose that same section of Sunset Boulevard for office space when they opened their first L.A. outpost that year.

Current L.A. Times food critic extraordinaire Jonathan Gold, who at the time was still writing his legendary Counter Intelligence column for LA Weekly, wrote a few food stories for the Times, including an ode to his then-favorite taco truck that included this all-time great sentence: "In tacos as in sex, timing is everything."

You could also still smoke inside in both bars and restaurants (those deadly sins wouldn't be banned in the city until 1998 and '95, respectively).

And speaking of bars (and big-name bylines), we would be remiss if we didn't mention that none other than once-fearsome Deadline founder Nikki Finke would chronicle the L.A. club scene for the Times before the year was over, proclaiming that "the now-pooped-out, dance-till-you-drop circuit in Los Angeles" was "about to be revived." 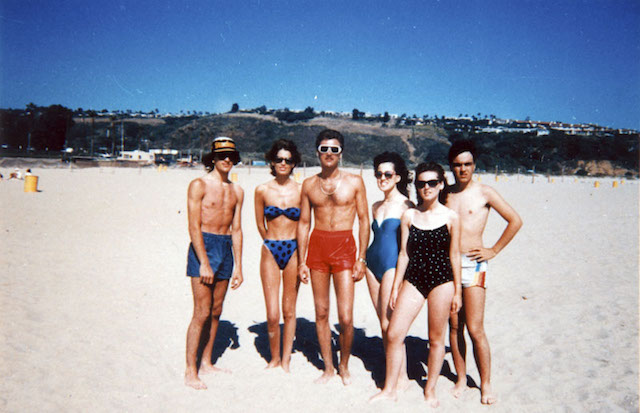 High school girls in the Valley were carrying very Big Purses, and the L.A. Times was on it with this A+ trend story:


A random survey of San Fernando Valley high school girls yields two trends: The need to carry an enormous bag strikes almost all adolescent females in grades nine through 12 and, within the Big Purse Set, there exist several subsets whose members seem to share various traits associated with the pack rat. (Of course, some girls can claim membership in all the subsets.)

The full contents of the purse of Erika Hall, a then-17-year-old Taft High senior from Canoga Park, included "English books, index and flash cards that she uses to practice for the academic decathlon, contact lenses, contact lens solution, makeup, checkbook, postcards from Santa Cruz, comb, two brushes and a pink wallet stuffed with her calendar, addresses, pictures and foil-wrapped chocolate... Christmas cards from friends, a disc camera she rarely uses and lots of Ready Teller receipts." Now, want us to really blow your mind? Erika Hall is now 45. Erika, if you're reading this, hit us up!

Another L.A. Times trend story identified a very peculiar 1988 occurrence: the "phenomenal increase in the number of adults who are wearing costumes," not just in October but year-round. The Times spoke with Encino psychologist Marilyn Ruman to understand the reasons why. "This time (the '80s) is in some ways as stringent as the '50s," Ruman said. "It's a very responsible time. Financially, people are doing better, but they are working harder and longer. It doesn't allow people to have much time to play. Little of what they do, even for leisure, isn't work. They work out, they work up."

And what exactly, were people dressing up as? Representatives from several costume shops reported that "'50s and mystery-murder parties as the current rage."

Much was also the same in 1988: the East Coast was finally taking Los Angeles seriously, Russia was on everyone's minds, and late-night diners were warned that there would probably be a line at Roscoe's in Hollywood.

"While there may not be more reporting on Southern California, says Noreen O'Leary, who covers the print media for Adweek, it does appear to be more serious," the L.A. Times reported in June 1988, which sounds a lot like the recent attention increasingly paid in the New York Times' 2016-2017 Columbus-like dispatches from the Far West. "There is," O'Leary noted to the Times, "an almost grudging respect for California theater and the arts by East Coast publications."

However, according to Patrick Reilly, O'Leary's counterpart at Ad Age, coverage of Los Angeles was "still filled with misconceptions—crowded freeways, nobody reads, you all live on the beach." Again, not much has changed. 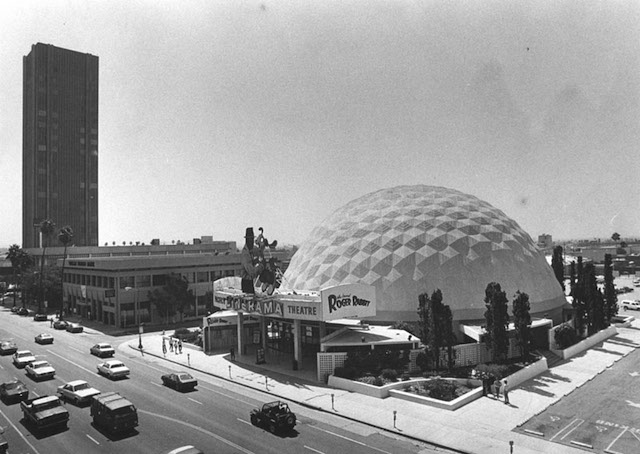 In L.A. circa 1988, at least two men were able to fill busy schedules of film and public appearances working as Mikhail Gorbachev lookalikes, including real estate agent Ron Knapp. "(People) give me the big eye, and they take two steps back and they say, `Speak some Russian.' They want a glossy picture with a hammer and sickle sitting on their desk, signed as Mikhail Gorbachev," Knapp told the Times.

And speaking of Russia, now-Russian citizen Стивена Сигала had yet to receive a Cyrillic name or a movie career. In early 1988, Steven Seagal—then so unknown that the Times' coverage included a parenthetical explaining how to pronounce his name—was just "a 6-foot-4 martial-arts wizard" whose "fans proclaim that he's a star waiting to be born." See the excerpt below for a blast from the Hollywood past, when Mike Ovitz still ruled the town and a now-former California Governor was an action megastar:

Los Angeles in 1988 was "The City Of Champions," as a December headline proclaimed. The Dodgers, "unbelievable as it might have seemed through the long summer" that preceded their victory, did win the World Series, and the Lakers won their eleventh NBA championship. Even often forgotten hockey fans now had Wayne Gretzky, "the Great One," to root for on the Kings. And L.A. native Florence Griffith Joyner became a three-time gold medalist at the 1988 Summer Olympics in Seoul, South Korea.

But 1988, according to an end-of-the-year retrospective published in the L.A. Times, "was a year at the flash point, a volatile period in which spectacular fires and senseless street-gang gunfire dominated the headlines." 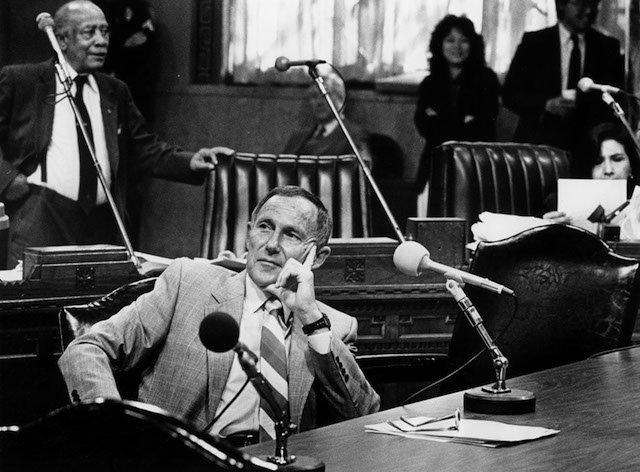 The January fatal shooting of Karen Toshima, a young Asian American bystander killed by gang crossfire in affluent Westwood Village, brought widespread national media coverage. The killing "jolted the nation" and "hit Los Angeles in its living room, shattering the naivete of Angelenos who assumed that gangs were confined to inner-city minority neighborhoods," according to a 1998 L.A. Times article written on the 10th anniversary of Toshima's death. The Westwood slaying also drew a massive LAPD response, "spark[ing] resentment in black and Latino communities, which grew outraged that one gang-related murder in Westwood seemed to matter more than the thousands that had occurred in South and East Los Angeles."

Then-LAPD Chief Darryl F. Gates had launched the department's infamous Operation Hammer the year before, but it was in August 1988 that 88 LAPD officers descended on a South L.A. apartment complex in "an all-out search for drugs and a massive show of force" that left widespread property damage, gang-style graffiti from police officers, and helped lay the groundwork for scandals to come.