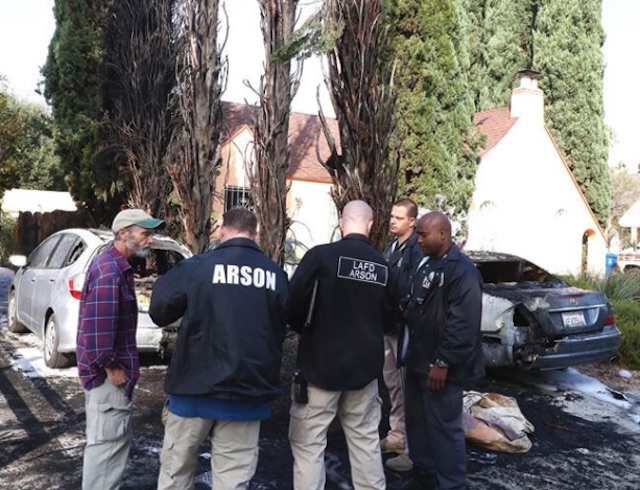 Arson investigators at the scene in North Hollywood on October 19. (Photo via LAFD/Facebook)

A woman was detained and questioned Monday by the Los Angeles Police Department over possible involvement with a rash of arson fires that were started in the same general area of North Hollywood in the past month.

As reported at Los Angeles Daily News, 35-year-old Angelina McWhirter was initially arrested by the LAPD on unrelated, outstanding warrants. The arrest came after Los Angeles Fire Department officials released a flier describing a female suspect who was believed to have set a big rig on fire at Irvine Avenue. The LAPD found McWhirter as they looked for someone matching the description.

“We ran her (through their system); it turned out she had unrelated warrants,” Officer Mike Lopez of the LAPD told the Daily News. “Now, we’re working with LAFD to investigate to see if that’s the woman…who was on the flier and who committed the arson.” Sal Ramirez, a public information officer with the LAPD, told LAist that McWhirter is still in custody as of noon Tuesday.

The Los Angeles Fire Department declined to comment, as it is an ongoing investigation.

According to ABC7, there have been reports of 10 fires in a two-mile radius within North Hollywood since September. On Thursday morning, four fires were reported in the same hour within four blocks of each other. Three of those reports involved a fire that had spread up a tree and damaged nearby vehicles in the process. One of the fires was caught on video by a resident:

Woke up to this across the street, trees and car on fire #northhollywood #fire pic.twitter.com/6IM4vQGtnl

CBS 2 reported that, also on early Thursday morning, a woman was caught on surveillance footage attempting to set a big rig on fire. She was filmed pulling up to the big rig on a bicycle, then pulling items out from her bag. She then spent several minutes cutting rope and soaking it in lighter fluid, before stuffing it into the gas tank. She lit the rope on fire, but it began to quickly die out. The woman was seen waiting around for a few moments before riding away. “She wanted to do what she does and she had all of the equipment,” the owner of the A-1 Home Improvement on Victory Boulevard, whose security cameras filmed the suspect, told CBS 2. He added that someone had attempted to set his dumpster on fire a month prior, and says he believes the woman in the video was at fault.

Prior to these events, another set of five fires (all of which were believed to be the result of arson) was reported on the morning of September 25 in North Hollywood. “It remains unclear if there is a connection between this morning’s fire and the previous spree,” Captain Erik Scottof the Los Angeles Fire Department told LAist last week. “It remains under active investigation."

Anyone with information on the arson fires is encourages to call the LAFD Arson Section at 213-893-9800.