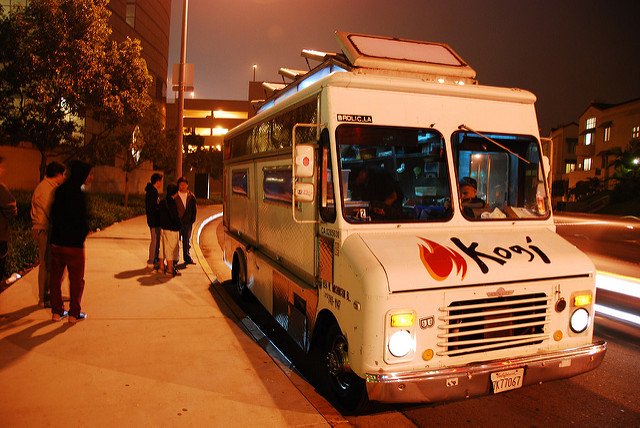 Peanuts and cracker jacks are fine and all, but if you’re in Los Angeles for the World Series, you may as well eat like an Angeleno, too. For that, Roy Choi, native Angeleno and the godfather of the modern food truck movement, is here to help. Two of his Kogi trucks will be camped out on opposite ends of Dodgers Stadium on Tuesday starting at 3:30 p.m. to nourish hungry baseball fans — because who needs Dodger dogs when you’ve got Kogi burritos?

In honor of the Dodgers’ first World Series game in nearly three decades, the two trucks will be offering Kogi burritos for $5. The promotion saves you a couple of bucks off the normal price, which may be helpful for the cash-strapped fans who shelled out thousands of dollars to root, root, root for the hometeam. The truck parked at 1918 Riverside Drive will be doling out burritos until 6:30 p.m. and the truck parked at 1427 W. Sunset Blvd. will be around until 9 p.m. Choi’s brick-and-mortar Chinatown restaurant Chego, just down the street from the stadium, will also be offering a Dodgers promotion: burritos there are just $6 from 3:30 pm until closing at 10 p.m. on both game days.

But if your game plan is to stay as far away from Dodger Stadium traffic as possible without leaving the city, then Choi’s still got you covered even on the West Side. His OG Kogi Taqueria on Overland Ave. will hook you up with $5 burritos during the same time frame. Looking for a place to wash down all that Kogi and watch the game from afar? The Butcher’s Dog up the street on West Olympic has plenty of TVs and happy hour specials. Email your orders to eddie@kogibbq.com with “Dodger Special” in the subject line. Because no matter who wins and who loses, L.A. will always have burritos.

Related: The Best Places To Get Drunk And Watch The World Series Around L.A.