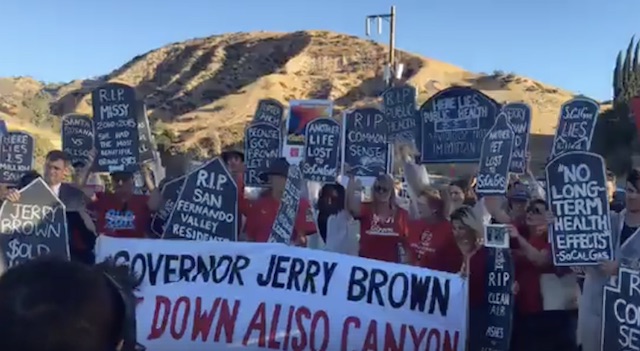 Protestors at Aliso Canyon on Monday. (Photo courtesy of Save Porter Ranch, via Facebook)

Eighteen protesters were arrested Monday after staging a protest at the front gate of the Aliso Canyon Natural Gas Storage Facility near Porter Ranch, while a truck driver who drove up to the group as they blocked the entrance was detained.

The protest took place on the two-year anniversary of the massive gas leak at Aliso Canyon. A video of the event (below) was taped on Facebook Live and later put up on the Save Porter Ranch Facebook page. At the 3 hour and 18 minute mark, the truck can be seen driving up to a crowd of protesters who were sitting on the ground. Since the truck is coming from off-screen, it's hard to discern how fast it was going, but an officer later remarked in the video that it was "kinda going fast."

Several people got up from where they were sitting as the truck stopped right in front of them. “Are you crazy?” one person can be heard screaming at the driver. “I don’t think he saw [the protesters],” one of the officers said, though he added later that they would be taking down the driver's information. "He was definitely laughing in the car," said the person behind the camera.

Sal Ramirez, a public information officer with the Los Angeles Police Department, told LAist that 18 protesters were arrested for failing to disperse. He added that the driver of the truck was detained— according to ABC 7 the driver will be investigated for possible assault with a deadly weapon.

The Aliso Canyon gas leak was a massive environmental disaster that started in October 2015 and went on for months until SoCal Gas finally declared that the leak was plugged. It's estimated that it spewed roughly 100,000 tons of methane gas into the air, and boosted California's methane emissions by 25 percent for the four-month period. More than 3,000 households were evacuated, and two schools were temporarily closed. Locals reported that they suffered headaches, nosebleeds, and other health effects—the concerns have led researchers to launch studies into the long-term effects of the leak.